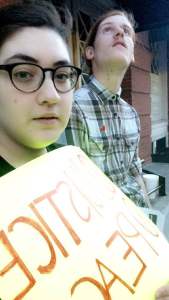 Activists in Dallas, Texas demonstrated on April 7 in response to a call for nationwide action to bring attention to the murder of Akai Gurley in New York City.

The protest, held at the West End Station for the Dallas Area Rapid Transit (DART) featured demonstrators holding signs that read “NO SPECIAL TREATMENT FOR KILLER COPS” and “JUSTICE FOR AKAI GURLEY” as well as “NO JUSTICE NO PEACE.”

The general response from the public was overwhelmingly positive, with people asking to take photos and videos for social media outlets and offering gestures of solidarity. Many people expressed interest in the message that corrupt police behavior will not be tolerated, especially at the expense of human life.

Dallas, which is not a city with a history of civil rights action, seems ready now more than ever to build support and solidarity against capitalism and police brutality.