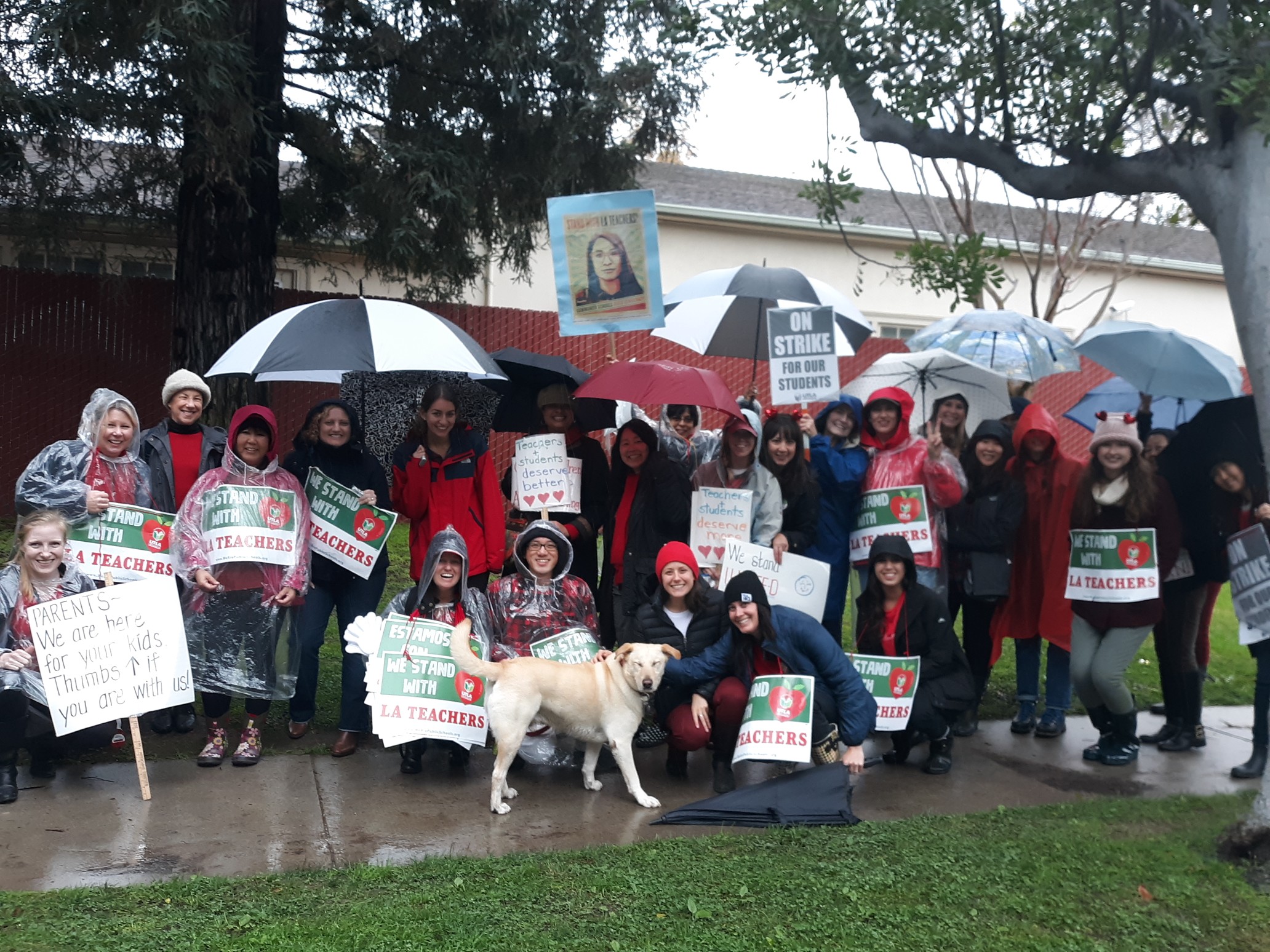 “We do this for our kids. I am here for my students… this is my first strike in the U.S. I am from France originally, where we strike all the time. We need that here, to organize,” said Andrée, a math teacher at Canoga Park High School in San Fernando Valley, Los Angeles. She’s one of the 33,000 teachers (as well as counselors, librarians, nurses, and other education workers in the country’s second largest school district) represented by United Teachers of Los Angeles, who, starting  January 14, went on strike for the first time in 30 years.

The strike is not about wages, as important as salary increases would be to teachers (cost of living in L.A. rose 27 percent since 2006; the LAUSD board proposed a 2 percent wage increase for teaching staff last year, while board member salaries increased by 174 percent that same year), but rather about the future of public schools in America. UTLA’s list of demands reflect the needs of not just Los Angeles but public schools across the nation: lower class sizes, nurses and counselors, resources for teachers, less standardized testing, and regulation of privatized charter schools.

Education is one the few remaining public services in a country whose economy is increasingly dominated by corporate austerity measures, but decades of budget cuts have stripped teachers of the resources needed to provide students with a healthy and socially just learning environment. Unsurprisingly, politicians and district leaders have used the deepening crisis as an opportunity to push for further privatization and tax cuts for the wealthy. Los Angeles Unified School District Superintendent Austin Beutner, for instance, was exposed when plans were leaked from his office proposing to divide the district into 32 “portfolio” districts, a strategy that has been used in Newark, New Jersey to privatize public education in that city.

“Our pro-charter school board hired Beutner for the intentional purpose of destroying our school district,” said Ingrid Gunnell, a UTLA salary point advisor with over 17 years of teaching experience, on Jan. 15. “He has no experience in education and no degree in education. He’s not an educational leader; he’s a hedge fund manager who made his money dividing up companies – and that’s what he’s doing with our school district.”

Sonia Cole, a registered nurse at Marvin Elementary School, spoke to Liberation News about how she sees first hand the ordeals that teachers go through with the students, and felt compelled to join the picket lines. She is only at the school two to three days a week, seeing an average of 25-30 students a day. On the days that she is not at the school, the office is inundated with students, and all they can provide is an ice pack, while some require medical care for issues that include seizures or asthma attacks. Sometimes when she is scheduled at the school, she will have to leave midday to help at a different school to deal with a diabetes complication or a broken bone. Last year, the school had to call the paramedics five times due to not having a nurse on staff. She believes children deserve to have a nurse on staff at every school five days a week.

UTLA members voted overwhelmingly to strike at the end of 2018, and when the district failed to move negotiations forward last week — Beutner failed to show up for two of three sessions — the strike was set for Jan. 14. “Austin Beutner is scrambling,” said Alex Caputo-Pearl, UTLA president, in a Jan. 15 evening strike update. During a press conference at the close of the first strike day, Beutner alleged that only 3,500 teachers had gone on strike, and intimated that LAUSD teachers can afford to go on strike because their children go to private school anyway (which, as Caputo-Pearl made clear, is a ridiculous claim).

In fact, over 30,000 — almost all of the UTLA rank and file – teachers, students, parents, and other allies — braved the rain on Jan. 14 and 15, picketing outside every single school in the district from 7 to 9 am, then holding mass actions (at the Los Angeles Unified School District headquarters on Jan. 14, and the California Charter School Association building on Tuesday), finally returning to picket outside their schools from 1 pm to 3 pm.

This has not gone on without hostility from the district. Letters misrepresenting the union and calling the strike unnecessary were sent out to parents of LAUSD students. Other mixed messages came out from schools across the city, warning that students who joined their teachers in picket lines would be at risk of disciplinary action. Though UTLA was clear that these measures were illegitimate, some local news stations broadcasted the warnings. The strike, despite strong publicity and eliciting solidarity statements from around the country, has received little news coverage from mainstream news sources in the U.S.

This antagonism has only increased the resolve of the union and its rank and file, however. In an interview with Liberation News, the UTLA president said “I am very confident. We are very well organized. We’ve got to just keep on building each day, make each day a little bit stronger, that’s when they get the message they’ve got to deal with our demands.” Each mid-day rally attracted over 50,000 UTLA members and allies. “It was inspiring to see 50,000 strong downtown in the middle of the pouring rain,” said David Graham, a history teacher at Walter Reed Middle School.

Day 2 of the strike saw just as many teachers hitting the picket lines, with no signs of concession from either side. Julie Vanwinkle, a UTLA organizer, told Liberation News that the union members are prepared to stay on strike as long as it takes to get a better contract — one that benefits teachers and students alike. “Of course we want a raise. Of course we want better working conditions for ourselves. But it’s mainly about the students and communities we serve,” she said. “This is a fight to keep schools public in LA.”

A Loyola Marymount University survey on Tuesday showed 80 percent support for the strike across Los Angeles County, with the majority of those indicating “strong” support. “People are with us because they know we’re doing it for their kids and our community. I think the fact that the superintendent said there were 3,500 of us there yesterday is really sad,” said Danielle, an English teacher at Walter Reed MS.

Negotiations continue, with Los Angeles Mayor Eric Garcetti reportedly now involved in talks, beginning the afternoon of Jan. 15. The capitalist crusade against public education is a direct attack on the entire working class, and what happens in Los Angeles over the next week will surely set an important precedent – not just for educators, but for all workers.