On Nov. 12, activists with the American Indian Movement and their supporters marched and rallied in Olympia, Washington at the State Capitol, to demand clemency for AIM leader and political prisoner Leonard Peltier. Peltier has been imprisoned for 41 years, related to an unjust conviction for killing two FBI agents during a firefight at Pine Ridge Reservation. Learn more about the case here.

Chauncey Peltier, Leonard’s oldest son, spoke at the opening gathering at Sylvester Park and again at the Capitol. He implored President Obama to grant executive clemency to his father in the remaining days of his presidency. 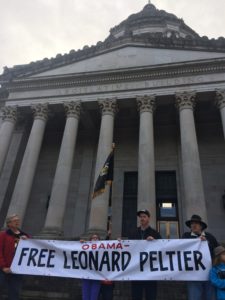 This reporter spoke personally with Chauncey, who reminded me that the people have a 70 day window before Donald Trump’s inauguration, to pressure Obama to grant clemency. Leonard Peltier has served 41 years for a crime he did not commit–but as Chauncey said, even if he were guilty, releasing him to go home and be with his family would be the compassionate thing to do, as Leonard is facing significant health issues at this time.

Chauncey and other leaders including John Braveheart, a veteran of Alcatraz and Wounded Knee, and Steve Happy, Anishnabe,  spoke passionately at the Capitol building, not only about Leonard’s case, but also showing the connections between what Leonard was doing at Oglala in the struggle that led to his being put on trial, and the struggle going on today at Standing Rock to oppose the Dakota Access Pipeline. Speakers put the struggle at Pine Ridge into the greater context of the struggle against colonialist oppression and theft of Native land and resources, and everyone’s struggle against the destruction of the earth. 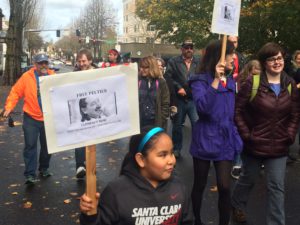 Bringing joy and hope to all present were the children, who led chants and waved signs with great energy throughout the action.

Please, take the time to send a letter or make a call to the White House asking President Obama to grant clemency to Leonard Peltier. 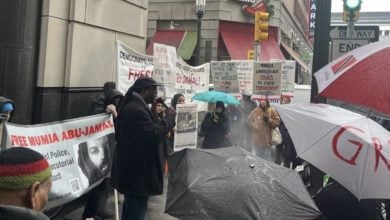 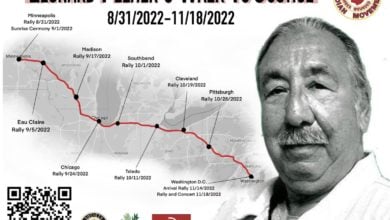