Anti-war organizers in Pennsylvania sprung into action following the Trump administration’s brazen act of war against Iran to participate in the January 4 national day of action. The movement continues with two exciting upcoming events: The “Countering The Lies” national online teach-in on January 11, and the January 25 global day of protest. 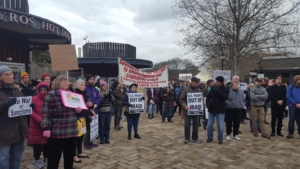 More than 200 people joined the rally in Pittsburgh held at Schenley Plaza to stand against the Trump administration’s war drive on Iran and to demand all U.S. troops out of Iraq. In addition to local organizers of the ANSWER Coalition and Party for Socialism and Liberation, participants and speakers included organizers with the Green Party of Allegheny County, Pittsburgh Anti-Imperialist League, local anti-war organizers and Iraq war veterans.

Addressing the crowd, Emily Hannon, an organizer with the ANSWER Coalition said:

“The working class of the United States have much more in common with the working people of Iraq and Iran than they do their own government officials. When we say we Stand with Baghdad, it is because we stand with all the workers and colonized peoples of the world. To the people of Chile, Bolivia, Venezuela, Iraq, Syria and Iran: we stand in solidarity with you and your right to resist U.S. imperialism. “

The sense of solidarity with the people of Iraq and Iran was palpable as the crowd responding by chanting ” Trump says more war, we say no more!” “Hands off Iraq!” “Hands of Iran!”.

“While the assassination of Iran’s top general is framed as a defensive measure by the U.S. ruling class and its boot-licking, mouthpiece media, nothing can be further from the truth. The truth is this sinister attack is part of a deliberate and calculated act of war against Iran. The people of Iran or Iraq are not our enemies and as evidenced by today’s rallies all over the US, the people are not falling for the lies of Trump administration and clearly saying no to another imperialist war of plunder for the benefit of the rich.”

University of Pittsburgh student and PSL member John Wearden noted the importance of continuing to organize and staying on the streets in order to avoid another US war. 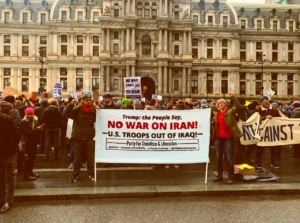 The action began with a rally where speakers denounced U.S. wars as a tool for the rich and big corporations to plunder the world. Asantewaa Nkrumah-Ture of the Black Alliance for Peace declared, “We will not fight for the rich! We will not fight for Wall Street! We will not fight for Lockheed Martin!” Timour Kamran of the Party for Socialism and Liberation stated, “The people that are responsible for this war are a tiny minority of the very, very rich and they’re the people who are going to benefit from this war. The people who are going to suffer from this war are almost entirely from the working class on both sides, especially on the Iraqi and the Iranian side.”

The crowd then took to the streets and marched through downtown Philadelphia. People along the march route were overwhelmingly supportive of the demonstration’s anti-war message, and some even joined the march on the spot. 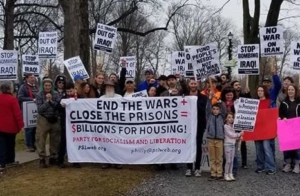 Lancaster’s emergency action was organized by the ANSWER Coalition and Peace Action Network of Lancaster. Members from other local progressive organizations also joined, including 1040 for Peace, the Party for Socialism and Liberation and the Lancaster County Green Party.

The demonstration was held outside of the Lancaster County Prison in the Puerto Rican and African American neighborhood where PSL members have been organizing against mass incarceration and the cruel conditions inside. Organizers held a large banner that read: “End the wars + Close the prisons = $Billions for housing.”

The rally included speakers who emphasized how the same politicians and corporate media outlets who have been using racist lies to bomb Iraq since Desert Storm, have been using racist lies to incarcerate Brown and Black people in the United States. In between speakers the crowd chanted slogans such as “Money for jobs and education, not for war and mass incarceration!”

After the rally, participants socialized over coffee and donuts sharing analysis and strengthening their commitments to build a mass anti-war movement demanding an end to the U.S. war drive. Everyone seemed to agree that the Democrats are just as addicted to the massive war profits as the Republicans, so it is up to working people to stand up in opposition.