In Colorado, there are 152,700 vacant housing units. Yet, in the midst of the COVID-19 crisis, the state has barely moved to provide safe housing for one of the groups that needs it the most—the homeless population.

On April 6, the Party for Socialism and Liberation in Denver began issuing “Notices of Improper Vacancy” to luxury apartments with huge vacancies in response to the ongoing twin crises of homelessness and COVID-19 in the city. 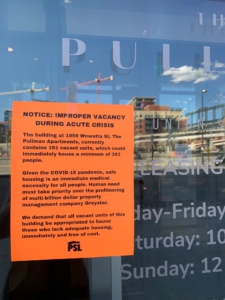 According to the U.S. Department of Housing and Urban Development, the Denver metro area has some 5,500 homeless residents. Homeless advocacy organizations like Denver Homeless Out Loud estimate the total number of homeless in the city to be closer to 10,000. Yet, even before the COVID-19 pandemic, the shelter capacity was no more than 2,000.

Homeless people are at a high risk of contracting COVID-19. Nationally, 23 percent of the homeless population are over 50, and 84 percent have a health condition, according to The National Alliance to End Homelessness. Those who stay in shelters face conditions that make physical distancing nearly impossible. Beds or sleeping mats are often three feet apart or less, and communal bathrooms and eating arrangements put people in close contact. Those who stay outside of shelters may avoid some of these conditions, but they have recently been banned from a major downtown Denver park due to “a lack of social distancing.”

These are just a few examples of the unacceptable treatment of people without houses by the city of Denver. Another is Mayor Michael Hancock’s plan to house just 600 people in a temporary, men’s-only shelter in the same location that the National Western Stock Show is held annually. Advocates and people in the shelter report that “buses coming to the shelter are packed tight with people. There is slightly more space than the former men’s shelters folks came from, but definitely not to the par of social distancing standards in this pandemic.”

The city is currently pleading with hotel owners to voluntarily enter into agreements with the city to temporarily house some portion of the homeless population. The mayor is considering one agreement that would require all potential residents to have no symptoms or exposure to the virus, which would effectively disqualify a large portion of the shelter population. The hotel would be paid by the city regardless of occupancy.

Denver PSL is demanding that the city immediately seize all vacant housing and use it to house the homeless population. Just 10 buildings in Denver have 1,217 vacant units, many of them owned by multi-billion dollar corporations. Unsurprisingly, these vacancies are heavily concentrated in the city’s luxury complexes, which so few of the people in Denver can afford. If the vacancies in just these 10 buildings were seized, they could accommodate the entire Denver shelter capacity, plus 750 additional people, and under far safer conditions.

In addition to the population that is currently homeless, a third of renters in the nation failed to pay their rent in the first week of April, putting them at risk for homelessness. Despite this, Colorado has put forward no plan to cancel rent payments during the COVID-19 pandemic, putting many more at risk of homelessness when eviction proceedings resume after the crisis.

The city and the state need to act now! Housing for people, not for profit! 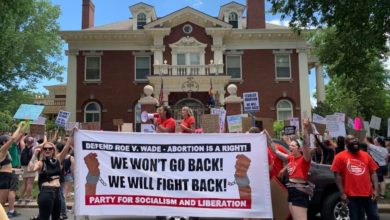