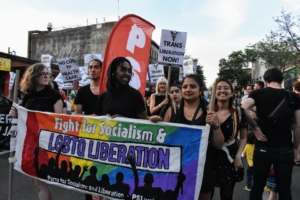 On June 8 and 9 at Hart Plaza in Detroit, the LGBTQ community held the 46th Annual Motor City PRIDE Festival and Parade. With over 50,000 attendees, it was the largest PRIDE celebration in Michigan’s history. This development represents a significant change in the attitudes of workers, and the credit for this goes entirely to organizers and the community who have struggled for rights, recognition, and liberation for the LGBTQ community for generations.

The attendees were predominantly youth, many of them Black and Brown. PRIDE celebrants expressed the importance of the event as a place of support for LGBTQ people. In conversations Liberation News had with people, many also expressed the feeling that capitalism wasn’t serving the interests of LGBTQ people, and that deeper changes need to be made. Many were receptive to our message of supporting PRIDE and continuing to struggle in the revolutionary tradition of LGBTQ liberation.

On the first day of the PRIDE celebration, the festivities were protested by a small contingent of armed neo-Nazis. The Nazis were escorted into PRIDE and protected by the Detroit Police Department. The fascists tore up a PRIDE flag, made chimpanzee noises at Black celebrants, and tried to physically intimidate a number of PRIDE attendees.

The Detroit Police Department’s handling of the situation has been the subject of national outcry. The police outrageously chose to protect the Nazi aggressors rather than the people defending PRIDE.

The actions of the Detroit Police Department and the neo-Nazis perfectly demonstrate the need for all socialists and progressive to vigorously defend PRIDE. PRIDE is mass public space that has been fought for and won. We will not allow it to be attacked or diminished — not when the LGBTQ community is under attack. Not ever.

It is an existential necessity for us to participate in — with revolutionary and socialist slogans — and militantly protect PRIDE from the racist and reactionaries who seek to build their movement through threats of violence and attacks on the LGBTQ community.