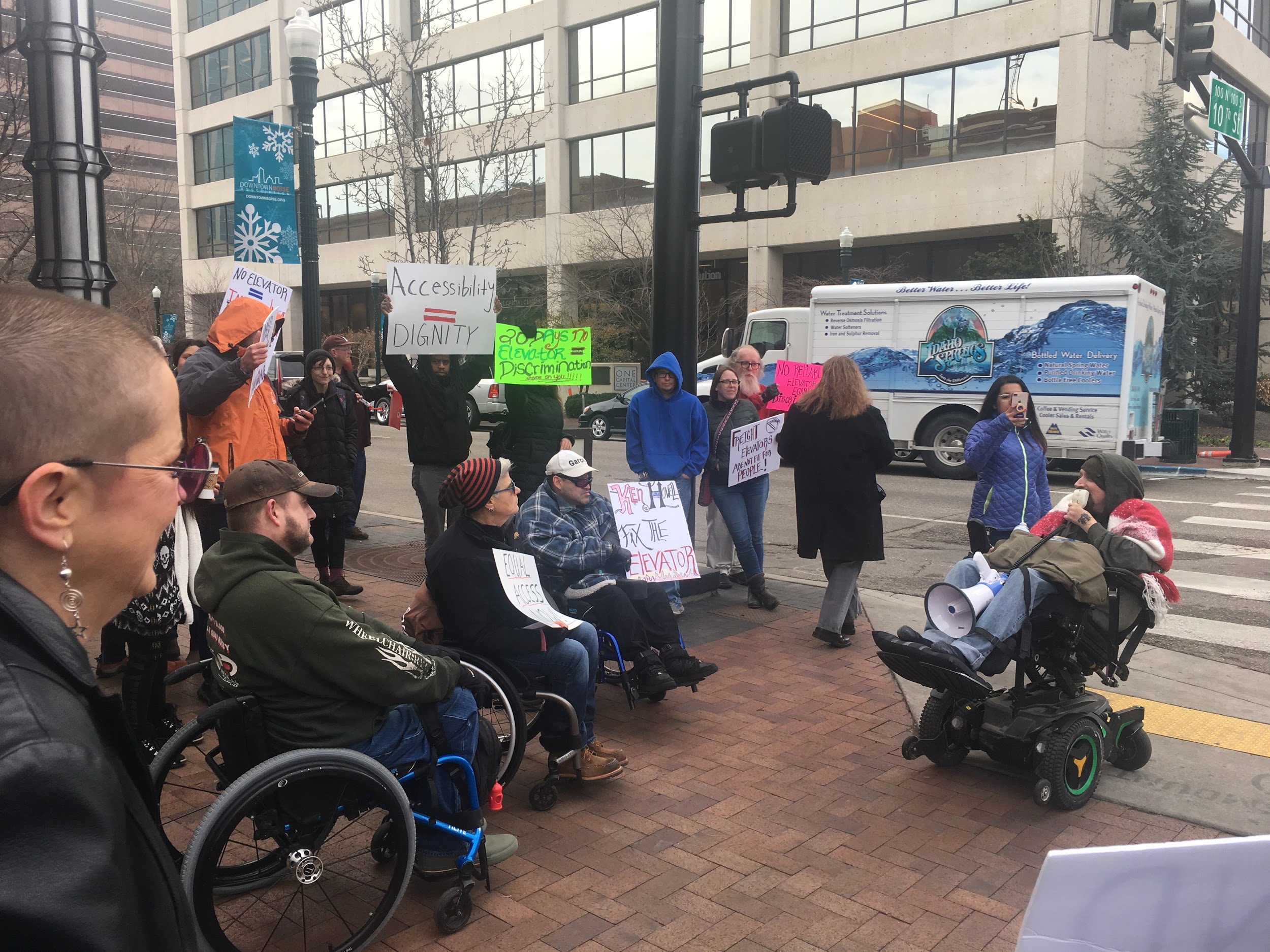 On December 21, dozens of people rallied outside the Idanha building in downtown Boise, Idaho in support of the building’s disabled tenants. These tenants spoke out against continuous neglect they face in regards to accessibility, as well as ongoing issues with elevators and lifts trapping people in or out of their own homes. Liberation News interviewed two tenants and organizers of the event, Ahniah Selene and Susan Bosworth. Selene spoke about other people in the building who held similar grievances, but were not able to be there for fear of retaliation from property management.

Ahniah Selene: “I’ve lived here for over two years, approximately two years, and on that time alone the elevator has been down over 20 days itself, the wheelchair external lift has been down for probably 35-40 days itself. So during all that time I’ve been trapped in my apartment, or I’ve been trapped on a couple occasions outside my apartment.  So you know, this building has a Section 42 government subsidy, and they are still not making that, making the processes for the accessibility in a timely fashion and repair done. So it’s discrimination, you know, it has an effect, it has a disparate effect on me because obviously I’m not able to come and go. I can’t grocery shop, I can’t go to church, I can’t go to work, I can’t go to school. You know, my life and the aspects of my life don’t matter to them because their inaction or slow action to the problem, and the recurring problem and not fixing it completely, using band-aid solutions.”

Liberation News: “At the protest we saw several signs mentioning someone by name…Ken Howell? Who is he?”

AS: “Kenneth Howell is the owner of the (Idanha) Building and several buildings downtown and Parklane management is the property management company that he deals with….The only interaction that i have had with him is when I was staying at the hotel, I saw him outside the building here, he asked me if I was ‘the one on the second floor’, didn’t even have the decency to know my name, and I said yes, I am. And he said ‘oh well we’re working hard to get it fixed’ and I said ‘well I haven’t seen any proof of that and frankly this is more than just an inconvenience’ and he again said ‘well we’re getting it fixed’ and then he walked up the stairs away from me.”

Liberation News: “During the rally you talked about some kinds of dismissive treatment you’d been getting, is that the instance your were talking about or was it more from the management?”

AS: “Well, that single instance when I spoke to Ken Howell himself,  but the management company as well. You know telling me that they’re not going to send people to work on it on the weekend because that’s expensive, telling me that they can’t do anything on the holidays like Thanksgiving, this last Thanksgiving, because it’s a holiday and, you know (…) they’re just not fixing it, or they’re not doing regular maintenance on the elevator. They’re not addressing the problem as if they’re the ones trapped inside their own home.Really what I want to say is my life matters, and the lives of people who have disabilities matter, and that people have said to me ‘why don’t you just move’ well the reason why I don’t just move is because there’s not affordable and accessible housing that’s available downtown or even in the city as it’s coming along. There’s a purge going on right now and the poor and the disabled and the people who are deemed less than are being shoved out of the city and I won’t be ignored.”

Susan Bosworth, Ahniah’s neighbor at the Idanha and a former litigator who is living with Parkinson’s,  told us briefly about her experience in the building.

Susan Bosworth: “When I moved in a few months ago it was my understanding that my apartment had been vacant for some time, because it’s governed by Title 42, the federal subsidy program that provides for low income housing. They were so excited to have me on board. They never mentioned that there were problems with the elevator, with the lift, with the building. I didn’t know until Ahniah told me that the problems I was having getting in and out with the elevator were repeat issues that had been going on for some time. Twice last month, because the elevator wasn’t working, I had to use the stairs. Both times I stopped because I knew it was going to cause seizures. By the time I reached my floor, even after resting, I was having seizures. At one point, maybe a month ago, I went to get into the lift with my walker and when I tried to open the downstairs door, I stranded Ahniah in the lift. I tried to stay, to wait for help. He was able to contact somebody, I couldn’t stay because it was too cold to be outside. That lift is the same temperature as the outside.

“It’s a struggle getting the downstairs and the upstairs doors open. The upstairs door will not close unless you wrestle it closed, the elevator lift will operate with that door open, which means if you go to get into the lift, it’s not obvious. If that lift is not at your level you could fall right into that shaft. For weeks afterwards, I couldn’t get my dog into the lift because he freaked out when Ahniah got trapped. I literally had to carry him in thrashing for weeks. It’s terrifying to me, that I could try to get downstairs and end up trapped. A woman on the sixth floor, they thought was having a heart attack several months ago… And they had to get the paramedics to walk her down all those stairs to get her to the hospital.

“It’s terrifying that they’re using government funds for Title 42 to get us in, then refusing to comply with the ADA [Americans with Disabilities Act-Ed]. Several times last month, I was messaging them back and forth by email, because I couldn’t get downstairs because the elevator wasn’t working, that I couldn’t come home because I knew I couldn’t get back upstairs and was repeatedly told by management that the elevator was functioning when it wasn’t. It’s not just indifference, it’s apathy, and it’s wrong, and it’s scary.” 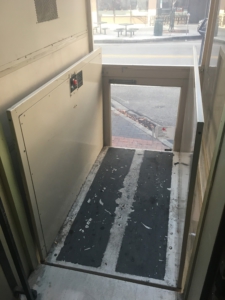 Liberation News was able to see first hand the conditions of the lift and the elevator. The elevator felt small and cramped with just a few people in it. On examination of the control panel for the external chair lift it was found dented, with screws missing, and multiple wires exposed.

This mistreatment and neglect aimed of disabled tenants in the Idanha building is not simply a byproduct of bad landlords or mishandling of property management, but one of countless examples of the chaos and struggle working class people are forced to live with in a capitalist society, where the vast vast vast majority of housing is held in the hands of a paltry few wealthy landowners who are driven solely by profit. All working class people should fight against ableism, against the landowners and their exploitation of our communities, and against the capitalist system that empowers them and makes their profit a higher priority than our lives!