As we celebrate the beauty, diversity, and life-sustaining qualities of our planet this Earth Day, we must also recognize the dire future that awaits it under the status quo. It is absolutely clear that climate change threatens the very survival of human civilization. Yet, politicians in the United States — the self-proclaimed leaders of the world who preside over its largest source of emissions per capita — remain at a standstill.

The world’s scientists have come to a consensus that the earth can only handle 1.5℃ of warming before total climate catastrophe begins. Thanks to Wall Street financiers, fossil fuel lobbyists, and their friends in government, the world has already surpassed 1.1℃ of warming, and is now on track for around 3℃ of warming by the end of the century unless there is a drastic change.

And in the wake of these catastrophes, the U.S. government’s response has routinely been inaction or outright hostility to the idea of doing more to protect the planet. Opponents of environmental destruction, especially Indigenous water protectors, have faced imprisonment. The year 2021 saw a record number of environmental activists killed globally for their work.

Last November gave the Biden administration a historic opportunity to guide global climate policy at the COP26 Climate Summit. Biden had a chance to detail his plan to achieve the goal he laid out last Earth Day — a 50 percent reduction in emissions below 2005 levels by the year 2030. Instead, the summit once again produced only non-binding commitments. It was attended en masse by over 500 paid fossil fuel lobbyists, the largest delegation at the summit by far, which constituted double the entire number of Indigenous delegates.

The Build Back Better bill, which was expected to be Biden and the Democrats’ signature piece of domestic policy legislation, hardly delivered on its climate promises either — and even these proposals ultimately went down in flames.

The bill’s climate section allocated $555 billion for preventing climate catastrophe. The majority of this money — $320 billion — would go towards tax credits for producers and buyers of renewable energy sources. Funding would also go towards making buildings more energy efficient, paying homeowners to switch to electric appliances or solar panels, providing rebates for purchasers of electric vehicles, and creating a Civilian Climate Corps.

Notably absent is any provision for penalties for companies that continue to burn massive quantities of fossil fuels. Biden is intentionally trying not to step on the toes of the powerful fossil fuel CEOs and lobbyists, instead raising unrealistic proposals like funding for “carbon capture” — a technology so impractical, expensive, and inefficient that it is not widely implemented anywhere in the world.

But even still, the passage of Build Back Better would have been a major development in the context of U.S. environmental policy history, considering that the last attempt to pass climate legislation was under Obama in 2009. But right-wing Democrat Joe Manchin — who is himself a coal industry capitalist through his company Enersystems! — ultimately withdrew from negotiations and killed the bill entirely.

Now, under the cover of war hysteria targeting Russia, Biden is preparing to actually expand oil and gas drilling in the United States to offset the high gas prices that could bite Democrats in the midterm elections.

It is clear that “green capitalism” will not save us. A democratically-planned economy focused on meeting the needs of the people and the planet is the only way forward. 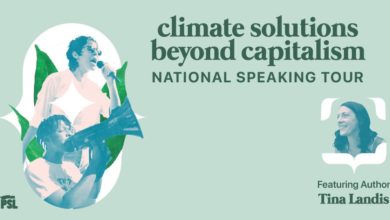