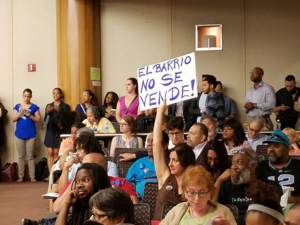 Instead of a straight “no” vote, the board voted against rezoning on the condition that certain stipulations be met such as increasing the “affordable” housing quota to 50%. This is not enough to meet the needs of the community. Conceding to the city’s plans now allows them to bulldoze El Barrio later.  A compromised “no” — which really is just a “maybe” on its way to becoming a “yes” — still concedes to the inevitability of a gentrification scheme that will displace long-term residents.

History shows that once the billionaire developers get their foot in the door, they will use a multitude of ways to reverse whatever promises they make. This is, after all, what they do for a living. 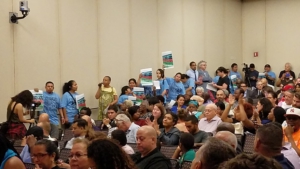 Chanting “No Rezoning” and holding up signs that read “East Harlem is not for sale” and “Stop Racist Rezoning,” community members sent a militant and powerful message that they were in no mood to negotiate away their neighborhood. Groups such as Picture the Homeless, East Harlem Preservation, El Barrio Unite, the Movement for Justice in El Barrio and the Justice Center en El Barrio all contributed to this effort. 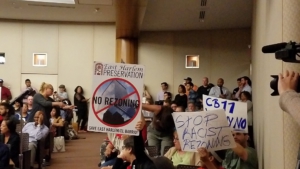 This meeting was just one front of a larger fight against gentrification and the fundamentally undemocratic political processes under which it takes place. The community boards that consider rezoning schemes are appointed, not elected, bodies, picked by the borough president and therefore not accountable to the grassroots.

The PSL, which spoke out during the community comment portion, and joined the protest on stage, distributed the following statement at the hearing. Activists also circulated information about the Sept. 16-17 People’s Congress of Resistance, which is drawing together organizers from tenant rights and other struggles from across the country.

East Harlem for the people, not for the developers!

Fight the city’s plan to rezone El Barrio for the landlords!

The City government is pushing its plan to rezone East Harlem. To rezone 96 blocks in the neighborhood, Community Board 11, the borough president, the City Planning Commission, City Council, and Mayor de Blasio must review and approve the proposal. So that never happens, the people of El Barrio must emphatically reject it now.

The city claims 3,500 new apartments will be created if the city approves the plan by the end of the year and promises that “a significant proportion” will be “permanently affordable.” But that’s just a sugar-coating to make us swallow a poisonous pill.

The real winners would be the city’s billionaire developers, who don’t just flip buildings — but entire neighborhoods. The rezoning would allow residential and commercial buildings as tall as 35 stories. This will boost developers’ profits and land values so high that they will all swarm to East Harlem to cash in.

The slumlords who have neglected buildings and their tenants for years would cash out. This is the moment they have been waiting for.

Rezoning means “pay day” for the landlords. But for local residents it spells evictions and destruction — not to mention additional harassment from the police.

Poor and working people of East Harlem are right to be upset. All the “development” that takes place in the city is directed by private real estate billionaires like Trump who want to drive people out of the city, not improve their lives.

Gentrification has not brought  jobs and services to East Harlem, as the politicians promised. In fact, their slumlord and developer friends have intentionally allowed the buildings to decay in order to drive out residents, mostly Latino and Black.  The landlords don’t fix anything up until they have more expensive tenants lined up. This has to end!

The city should launch a massive program to repair its aging bridges, subways, sewer pipes, and long-neglected public housing buildings, among other run-down and worn-out parts of our city. Such a project would create jobs and make the city a better place to live for everyone. Development does not have to mean displacement. Instead, the city, which is sitting on a multi-billion dollar surplus, makes huge interest payments to service its debt to the banks.

To solve the housing crisis, we need a movement that will fight back. All the condos which now sit empty should be seized and redistributed to those who have lost their homes.