On October 2, Lenín Moreno, President of Ecuador, signed a series of economic austerity measures to drastically cut back on social spending in order to access a 4.2 billion dollar loan from the International Monetary Fund. The Decree 883 eliminates state funded fuel subsidies, a staple program for the past 45 years, as well as major cuts to public sector salaries, benefits and pensions. The prices of gas, the major fuel source across the country, immediately spiked up over 123 percent unleashing a wave of protests in response to calls from major trade unions and transport workers to strike just one day after the measures were announced.

With high fuel prices affecting Ecuador’s most poor and working class most sharply, thousands of working people came out to the streets of Quito, the nation’s capital, calling for the reinstatement of the fuel subsidy. However, support for the protests and outcry over the decree quickly swelled to encompass a broad front of student, labor, and political organizations, including Citizen’s Revolution, the United Front of Workers (FUT), and indigenous organizations like the Confederation of Indigenous Nations of Ecuador (CONAIE). Demands quickly widened beyond concerns of the hike in fuel costs. By early last week, a wholesale rejection of all the measures in the decree also known as “El Paquetazo” culminated in a call for a national strike this past Wednesday. The tens of thousands of people of Ecuador made clear that their country will not be sold off to foreign powers at the expense of the poor and oppressed.

Decree 883 was the catalyst for Ecuador’s ongoing mass mobilizations, and yet another example of a stark rightward shift in Ecuador under President Moreno. Decree 883 closely resembles the neoliberal policies held by the country prior to the election of Rafael Correa in 2007. Under Correa, the country began to improve substantially, with poverty decreasing from 37.6 percent to 22.5 percent nationally. The GINI coefficient, a measure of economic inequality fell, from .54 to .47. as reported by the World Bank, signaling a decrease in wealth disparities.

Regionally, Correa aligned Ecuador with countries such as Cuba, Bolivia and Venezuela – all major players of the Bolivarian Revolution, championed by the late Hugo Chavez. They oriented themselves towards socialist construction and the creation of a progressive bloc in Latin America which refused to bow to the demands of U.S. economic and military power.

After Correa stepped down in 2017, his former vice president, Lenín Moreno, took office. Not soon after, it quickly became clear that Moreno’s government was not only uninterested in continuing to improve the conditions of Ecuador for working people, but was aligning itself with foreign imperial powers and appeasing the demands of the United States and its allies. This was notably evident when in April, Moreno allowed UK officials to remove Julian Assange, co-founder of Wikileaks, from the Ecuadorian embassy in London where he sought political asylum. He now serves a 50 week sentence and the U.S. government has already begun its case of extradition for his role in releasing documents that exposed the criminal actions of the U.S. ruling class. This move prompted a denouncement of Moreno’s administration by Correa calling his actions a betrayal to the country and the entire region.

Moreno’s cooperation with the IMF, an institution that continues the historic process of underdevelopment of countries in the Global South as well as recent affirmations of support from the Organization of American States for Moreno’s government will continue to create the conditions for the mass mobilizations and political unrest seen today.

In an attempt to quell the growing consciousness around the impact of the austerity measures, Moreno declared a nation-wide state of emergency for 30 days on October 3, ushering in increased police and military repression with the use of tear gas, rubber bullets and water cannons against protesters in Quito. Independent progressive media outlets have also increasingly been a target of the government which has thwarted access to signals and the internet. Radio Pichincha Universal, a radio station providing consistent coverage on the protests and reports on the police brutality faced by protesters, was shut down by Ecuadorian state police on behalf of the Attorney General’s office citing “attempt to sow disaccord” amongst citizens of the country. This was yet another attempt by Ecuador’s ruling class to stifle mobilizations and break up crucial communication across major cities and states.

Despite these efforts, by October 7, Moreno’s government was forced to move their operations from Quito to the coastal city of Guayaquil. This decision which was quickly followed by the occupation of the Congress building by protesters, signaling Moreno’s rapidly weakening legitimacy.

Across the world, the Ecuadorian people’s refusal to accept the IMF austerity measures has inspired international solidarity from indigenous and Ecuadorian diaspora communities in places including England, Mexico, and the United States. On October 8 in New York City, colloquially known to some as “Ecuayork”, members of Chicha Radical, and Kichwa Hatari, a Kichwa community radio station, alongside other supporters held a demonstration outside the IMF buildings in solidarity with the people of Ecuador and the national strike echoing the calls to reverse the decree and reject the IMF loan in its entirety.

Although Moreno has called for peaceful dialogue with protesters and leaders of CONAIE, the irony of this request is not lost on the people as government repression has continued throughout the day with the raiding of a cultural house and university in Quito where women and children were resting and the imposition of a 3 pm curfew as of October 12. The recent killing of indigenous leader Segundo Inocencio Tucumbi Incubio of the Cotopaxi province signifies the ongoing state violence towards the protesters, who according to the human rights watch group INREDH, was surrounded by police cavalry and beaten to death in an act of  “excessive repression.”

Despite the mounting state sanctioned backlash and ongoing media war against protesters by private news outlets with close ties to Moreno and Ecuador’s ruling class, the people in the streets show no signs of backing down. While some are calling for new elections in January of 2020, the vast majority of those in the streets have vowed to stay until all of Moreno’s economic measures are all reversed as seen in this excerpt from an October 11 statement by CONAIE:

”The dialogue that the National Government publicizes during this process of resistance which is also one of the worst massacres in the history of Ecuador, is an exacerbating violence reinforced by the public and military forces, with direct responsibility by the Government ministers of defense, Maria Paula Romo and Oswaldo Jarrin, who until this moment, leave us with 554 wounded, 929 detained, 5 dead and many others missing, which we understand as a crimes against humanity. We will be open to dialogue when the decree 883 is repealed.”

For those of us here in the United States, we must stand with Ecuador’s working class people who are fighting to reject institutions and solutions that reinforce and serve the imperialist ruling class. Campaign enters final stretch: the struggle for the future of Ecuador and Latin America 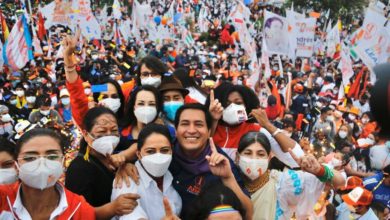 Will the left return to power in Ecuador?