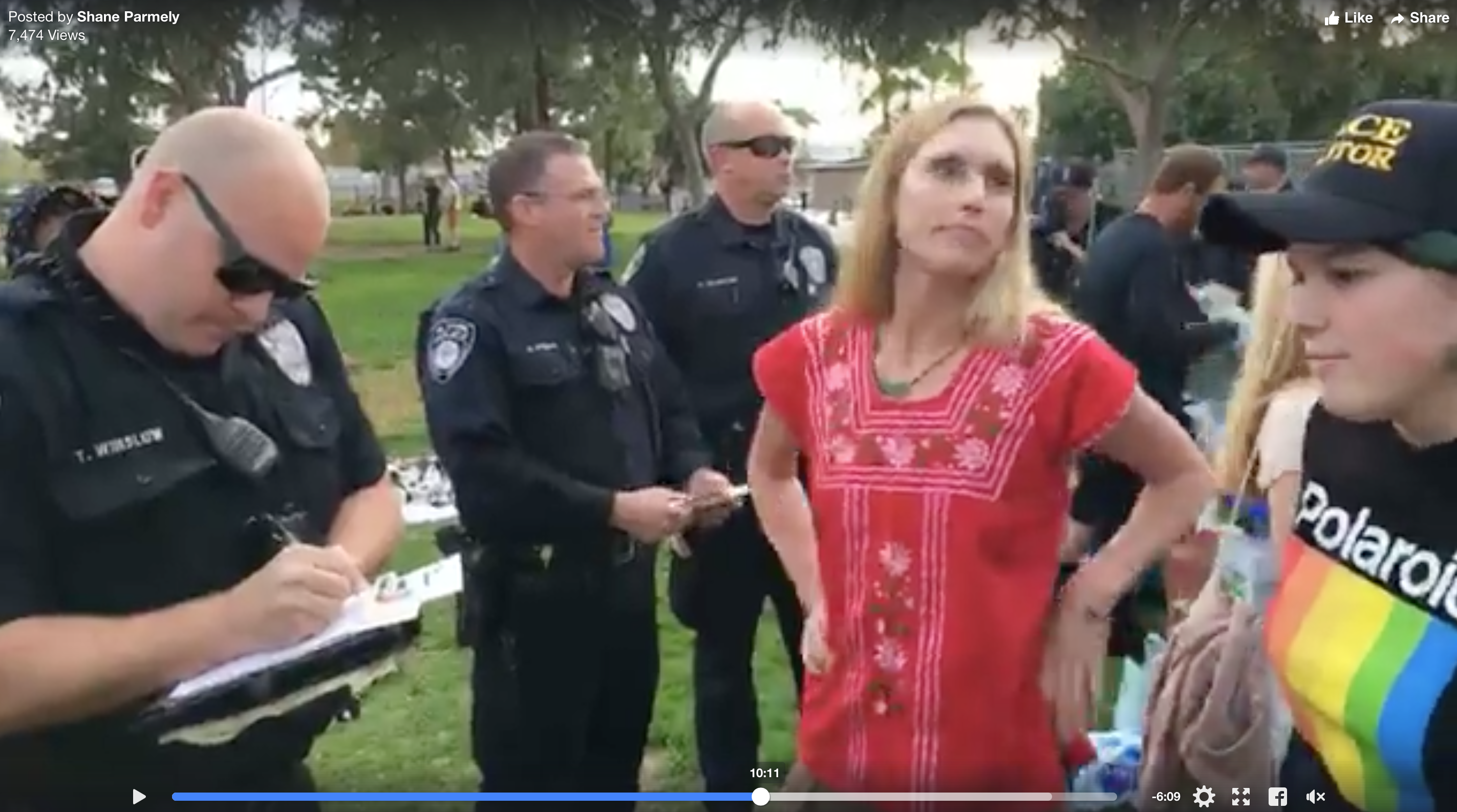 On January 14, El Cajon police arrested a dozen community members, including a 14-year-old, for offering food to their poor and hungry neighbors. Activists, some homeless themselves, bravely continued working as police moved in, with others stepping forward to take the place of individuals arrested. In an attempt to avoid generating emotional photo opportunities, police did not handcuff food workers or physically remove them from the site, instead issuing court summons on the spot in a tactic known as “field arrest and release.” The arrested individuals would not be intimidated, and returned to carry on their work after the arrests.

Since the City Council passed a so-called “emergency ordinance” against charitable food distribution just before Thanksgiving 2017, activists and people of conscience have been serving food in a local park every week as an act of principled civil disobedience, but this is the first time that the city has actually charged anyone for their actions. Two organizations have been spearheading the events: Food Not Bombs, a long-established radical organization focused on food insecurity; and Break the Ban, an ad-hoc coalition of left liberals, nonprofits, and religious leaders established in direct response to this ordinance. The two groups have been holding events on alternating weekends, and in a move that surprised some observers, the police struck the less radical Break the Ban group. While Food not Bombs feeds their neighbors as an explicitly revolutionary activity and as a direct challenge to capitalist state power, in interviews most members of Break the Ban frame their civil disobedience as a charitable act in defiance of a single “bad law,” and don’t represent themselves as a threat to capitalist structures of so-called law and order. That the city would crack down on this group, making no distinction between establishment Democrats and subversive radicals is a naked expression of the ruling class’s hatred for those it has forced to the bottom of the economic order. Even capitalism’s rhetoric about religious compassion and individual charity is brushed aside in their lust for retribution against those who would dare to acknowledge class oppression or defy even the most trivial of their cruel edicts.

Along with the militarized police force, several well-known far-right provocateurs attended the event, illustrating how any action at all in support of the poorest people poses a threat to right-wing capitalist ideology. These fascist organizers are confirmed to be the same ones who violently attacked protesters at the Border Wall last month, and who have announced plans to attack the revolutionary landmark Chicano Park on February 3. While in the past these thugs have targeted only explicitly political events and spaces, their hostile presence at a charitable event reveals their violent opposition to literally anything leftists or progressives might do, and to the whole program of ethical, compassionate social change from statehouse to soup line. Some attendees even speculated on the seeming coincidence that these explicitly fascist enforcers appeared on the same day that the police made their first round of arrests, openly wondering whether the collaboration between the police and fascist organizers might be shifting from tacit to formal, with police consciously summoning them as off-the-books “backup.”

The city of 102,000 residents is at the center of San Diego county’s ongoing and serious Hepatitis A outbreak, an outbreak mostly affecting the region’s poorest residents, that has sickened over 500 and claimed the lives of 20. Rather than increase health services, open public restrooms, provide handwashing stations or fund housing and job programs, local governments have cynically pounced on the crisis as a pretense to attack homeless people themselves. The food sharing ban was passed as part of a package of ordinances that also banned sleeping on the sidewalk, tents, and panhandling. None of these inhumane laws could in any way protect people without housing from the deadly disease, which is transmitted through fecal bacteria. Instead, they are calculated to make poor peoples’ lives even harder than they already are, effectively killing the poorest to protect the bourgeoisie’s property values and fleeting comfort in public spaces.

One measure that could be taken is to re-open the bathrooms in the park where the food-sharing event was held. They have been closed for months, leaving park patrons without a sanitary option for defecation or hand-washing. Activists also pointed out that barbecues, birthday parties, and picnics are all still allowed in parks; food sharing is only banned if it is “charitable” or if the recipients are “homeless.” Likewise, the park remains open to children and families, exposing city officials’ suggestion that the park is at particular risk for hepatitis transmission as a bold lie. In fact, local capitalists simply find poor people unsightly, and are trying to make their lives as difficult and unpleasant as possible in the hope that they will abandon their roots and community to move elsewhere.

Bill Wells, the Mayor of El Cajon, has said explicitly that he doesn’t consider the homeless to be  “people,” or at least not “normal people” — he was quoted in the San Diego CityBeat (a weekly newspaper) saying, “When you ask the normal person why they haven’t visited some of the bigger parks that we have, I think the answer you’re going to get is because it’s being overtaken by homeless and transient communities.” Yet under capitalism, nothing could be more normal than the degradation of crushing poverty. According to the Department of Housing and Urban Development, 553,700 people in the U.S. are experiencing homelessness on a given night. And over half of people in the U.S. are a single paycheck away from joining them

Organizers with Food Not Bombs will hold their next food sharing event January 27, roughly two weeks since the first arrests. At the time of this writing over 130 people have listed themselves as going to the event, with another 700 interested. Members of the community will continue to come out in droves to defy this unjust ordinance, and as a result capitalism’s contradictions will be highlighted even further.