Joaquin Guzman, also known as “El Chapo,” will likely spend the rest of his life in isolation inside a “supermax” prison in Colorado, after his sentencing on July 17 for drug trafficking, money laundering, and other crimes. No U.S. bankers will be in the adjoining cells, although without vast assistance from the latter, the Mexico-based drug cartels could never have achieved the size and profitability they have.

Despite the banks reaping huge profits as financiers and accomplices of the cartels, the number of bank executives criminally prosecuted for laundering hundreds of billions of dollars in illegal drug money is exactly zero. Take the case of the late Wachovia bank.

Wachovia bank went under in the great financial collapse of 2008 and was taken over — with the aid of billions in government funding — by Wells Fargo.

In March 2010, Wachovia agreed in a settlement to having laundered at least $378 billion (yes, billion with a “b”) in drug money from 2004 to 2007 for Mexican drug cartels, the same gangs that have wreaked murder and misery on much of Mexico, leaving tens of thousands dead.

In return for its invaluable services to the drug kingpins, Wachovia raked off a sizable share of the loot in fees for its services.

Did the Wachovia CEO and his lieutenants know where this river of dirty money was coming from? To ask the question is to answer it. They surely didn’t think it was from the meager earnings of small farmers or maquiladora workers, or even from legal industries. There could have been only one source for an amount equal to one-third of Mexico’s gross domestic product.

Martin Woods, director of Wachovia’s anti-money-laundering unit, stated: “It’s the banks laundering money for the cartels that finances the tragedy” in Mexico.  Woods told Bloomberg that he quit the bank after Wachovia executives repeatedly ignored his documentation of drug dealers laundering funds through the bank.

The cartels used some of the laundered money to buy large planes for the transport of hundreds of millions of dollars of cocaine, according to the Bloomberg report.  Such purchases to expand their operations would have been impossible without the funds being funneled through a “legitimate” bank. Some of the funds for the planes were laundered through Bank of America, which has long been notorious for the practice.

In U.S. federal court, conviction of possession of crack cocaine with a street value of $378 results in a minimum sentence of 5-10 years in prison. The majority of the more than two million jailed people in the U.S.  are there for small-time drug offenses.

So, the Wachovia executives, who admitted their guilt, must have gotten really long sentences for doing $378 billion in admitted drug business, right?  Not exactly.

Not one Wachovia executive spent a night or even an hour in jail. The federal prosecutors, after making strong-sounding speeches for public relations purposes, settled the case by fining Wachovia (by then Wells Fargo) $110 million (with an “m”) and penalizing them an additional $50 million. That amounts to about 4/100ths of 1 percent of the $378 billion of drug money that Wachovia laundered, and a mere 2 percent of Wells Fargo’s profits for 2010.

The federal prosecutors agreed to suspend their criminal “investigation” for one year. In April 2011, they announced that it was all over and there would be no further “punishment” for Wachovia or Wells Fargo. 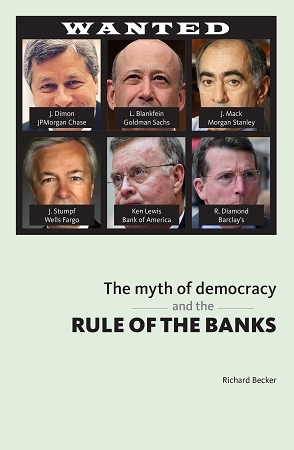 (From the 2012 PSL pamphlet, “The Myth of Democracy and the Rule of the Banks.”)

The U.S. Treasury Department arranged the settlements, and again, none of the repeat criminals in three-piece suits were criminally charged by the Justice Department, under either the Obama or Trump administrations. And while $230 billion is a lot of money, it is small fraction of the banks’ overall profits over those ten years, and in many cases only part of the fines is actually paid to the government.

What the total immunity of the finance CEOs reaffirms once again is that while the government rules over the people, the banks rule over the government.