In the middle of the workweek, in the middle of the workday, a diverse group of around 100 people gathered on short notice in front of the White House in Lafayette Square to demand the United States cease its military aggression towards Russia, along with calling for the disbanding of NATO. Leading organizations such as the ANSWER Coalition, Black Alliance for Peace, and CODEPINK coordinated the speak-out.

Speakers reminded the crowd that while the mainstream corporate media insist the Russian government instigates stability, a quick look at the history of U.S. foreign policy highlights Washington as the main threat to world peace. Many attendees and speakers consistently noted the hypocrisy of the U.S. capitalist regime sending a blank check to Ukraine for military aid, all while social spending and further stimulus checks failed to materialize for working Americans during the COVID pandemic. Organizers made clear that workers in the U.S. stand nothing to gain by listening to the corporate media, and everything to gain by refusing a war with Russia.

ANSWER organizer Sean Blackmon, who helped lead the event, remarked how “there is no voice of peace inside this U.S. government, Democrat or Republican.”

Blackmon continued, saying, “We know that war and imperialism is a bipartisan issue, just like how they voted on this criminally-obscene defense budget.” Just a few months ago, a record-breaking $777 billion budget was passed by an overwhelmingly bipartisan margin of 85-11, highlighting that while corporate puppets in the Senate, like Manchin and Sinema, can stonewall social spending that would bring relief to millions of working people, that both imperialist parties form a united front for death and war abroad.

“We must not fall for these false provocations propagated by the U.S. elite and their puppets in the corporate media,” said Michael Bearman, an organizer for the Party for Socialism and Liberation. He and other speakers reminded attendees that wars started on the premises of capitalist-manufactured lies must be resisted by regular working people speaking out about the truth of imperialism. 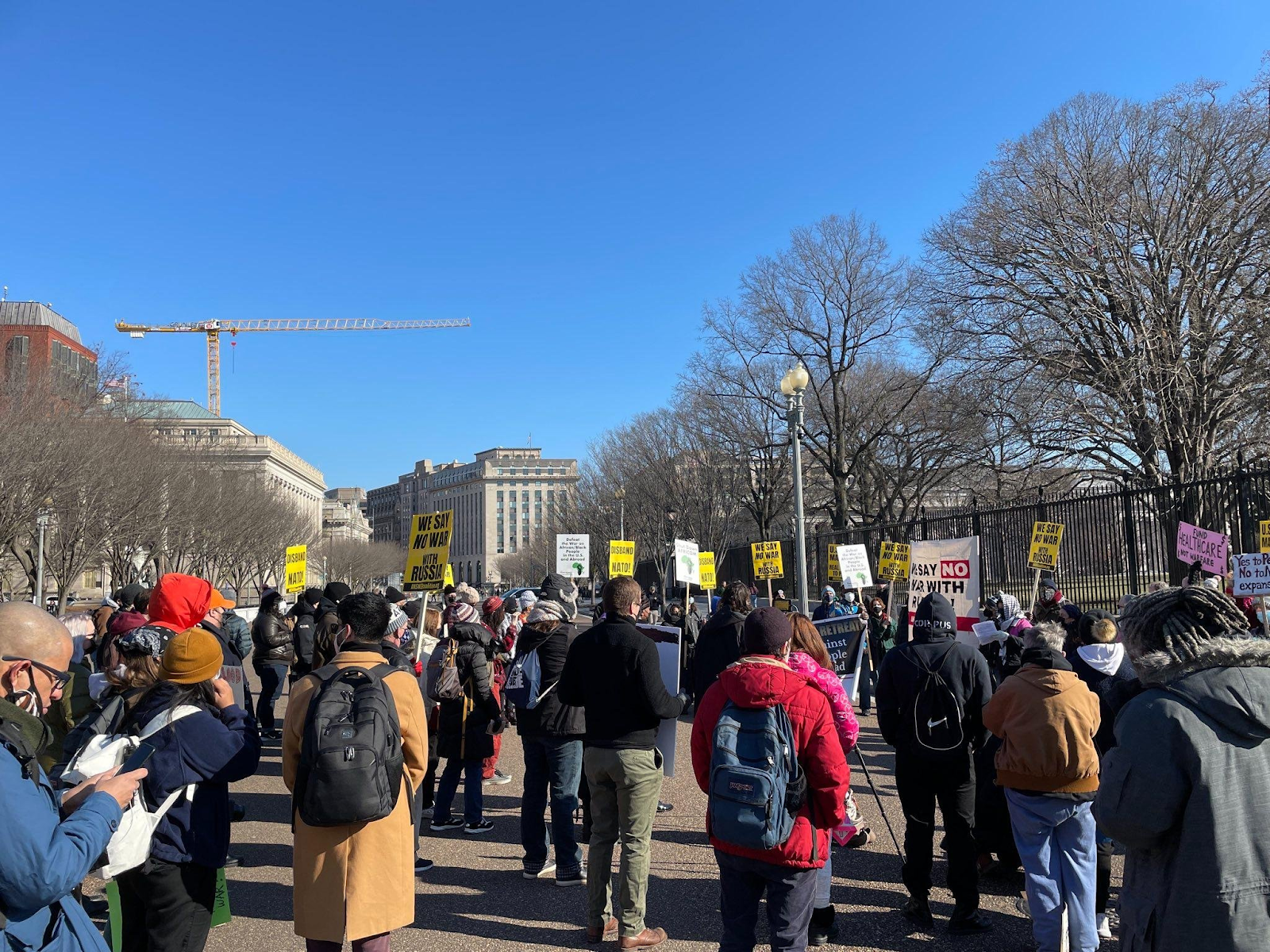 “We must remember how George W. Bush lied about weapons of mass destruction in Iraq, which prompted a decades-long war that killed millions of innocent Iraqi civilians, and thousands of poor and working-class Americans who were shipped off to fight these wars,” said Bearman.

The aggression on behalf of the United States by means of NATO comes at the same time at which domestic infrastructure is collapsing before our eyes. On Monday, Ukraine had received a $200 million shipment of U.S. weapons in order to further destabilize the region. On Friday morning, it was reported that a Pittsburgh bridge had collapsed and injured dozens. This week truly raises questions as to how serious the Biden administration is towards tackling domestic issues such as infrastructure, when Joe Biden prioritizes the militarization of Eastern Europe while bridges are crumbling.

Olivia DiNucci, and organizer for CODEPINK, addressed the fact that the “majority of the people in the U.S. do not want war. Who benefits the most from [U.S militarism]? Weapons manufacturers, arms dealers, the intelligence community, we can go on and on. Raytheon is already telling it’s stockholders publicly it is going to be a banner year” for profits in the arms industry.

It is the task of the working people within the United States to break through the corporate rhetoric of mainstream media selling these wars, and organize their communities to resist the militarism imposed by the ruling class on working people internationally.