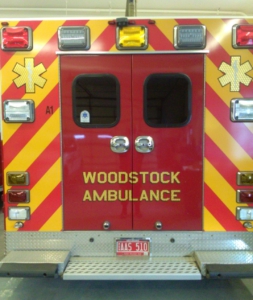 As the world watches the news regarding the ongoing COVID-19 pandemic, we are seeing terrible reports from major urban centers. Seattle, New York and Miami among others are dealing with the onslaught of a health crisis that is amplified by the disastrous effects of capitalism.

Rural communities are not immune from these same issues, even though citizens may feel a slight degree of comfort in their ability to maintain physical distancing protocols. Front-line workers still face the same daunting task of going to work to provide essential services to their community.

Liberation News spoke with Aaron M. Hoge, an EMT who works for the rural Vermont town of Woodstock.

Hoge has been a volunteer firefighter and EMT-basic for the past year and a half. A volunteer EMT for the town is paid a small stipend plus an hour/call fee, but are considered volunteers and are ineligible for benefits. Hoge also works for the Woodstock Inn and Resort as a greens-keeper and trail groomer, but the Inn and all resort operations have been suspended indefinitely. With the resort closed, he is without his normal and stable source of income.

Hoge told Liberation News that Vermont has issued new protocols requiring ambulance crews to wear surgical masks or N95 respirators and eye protection on every call, even “low-risk” calls. “We work under the assumption that everyone is infected, or otherwise lying about their symptoms or exposure,” Hoge said. He noted that this is not out of distrust in the public, but a measure for ensuring consistently safe practices. Due to the small size of the EMT crews, it would be devastating to lose responders due to sickness.

Another change in procedure they are facing is that only one responder may interact with a patient during a call. The other responder must remain in the cab of the ambulance for the duration of the call. This protocol is in place for every call, even low-risk ones.

When dealing with known or presumptive COVID-19 cases, Hoge stated that they wear all the gear mentioned previously but also an isolation gown and double sets of gloves. He added, “All patients are screened by dispatch for C-19 symptoms or exposure, and Emergency Departments are now screening all incoming ambulances, regardless of the nature of the call.”

When asked about their supply of personal protective equipment and if he has any concerns about either quality or quantity, Hoge stated: “As far as I know, we are well-stocked and prepared, but we will see over the next few weeks. We are reusing masks to limit turnover. We have less staff than hospitals, so we can get by with less, but only if high-risk cases remain low. We are more concerned about rapid staff scheduling as a result of exposure at this time.”

Potential for shortage a major concern

As far as his housing is concerned, Hoge stated that he lives in an apartment in a house that has been divided into multiple units. With the stay at home order, neighbors are home more often and his landlord, who often travels globally, is also house bound. He informed me that the landlord believes the utility usage has gone up and stated that she may need to raise rents next month. Hoge said: “I use a light for reading and an electric kettle for boiling water, as well as some occasional phone charging. So, landlords are in a position where they may have tenants who cannot keep up with payments, and it will be telling how they respond in this time of crisis.”

Hoge also provided insight into how they have been preparing at work for and during this crisis:

“Everything is cleaned and sanitized on a regular basis. There is Purell everywhere and checkpoints with stop signs that tell you to wash your hands upon entry to the building. Some offices have been duct-taped with plastic to allow no entry. It should not be taken lightly that we are beginning to see responders and health care workers succumbing to this virus. We are mentally preparing for the influx of New Yorkers coming to escape the outbreak to our left, while shaking our heads at the ‘business as usual — all businesses are essential’ mentality to our right in New Hampshire.”

Hoge is most worried about being a “super-spreader” and passing this virus along to vulnerable people within his family while remaining fine himself. He went further stating: “I am worried about my brother’s girlfriend who is an ICU nurse in Boston. I am worried about my older brother, who is a type-2 diabetic. I am worried that social-Darwinist fatalist paradigms are going to amplify as the death toll rises and the next Great Depression emerges. I have no delusions that this crisis will unite world governments; we will keep pointing fingers.”

Liberation News asked Hoge what he believes could have been done to prevent this crisis and what he feels that the government should be doing about it now. He provided a sober and straightforward response:

“Transparency, trust in the science and health community, less combative relations with China. But there is nothing that could have made Americans believe in this thing besides it touching down and wreaking havoc. We’ve grown complacent and delusional. Nothing short of a national tragedy will prompt pro-active measures for the next time around. We need to mobilize and act as though we are at war, because we are.”