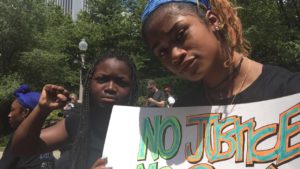 The following blog is from an interview I did on July 13 with Ashanti Andrews, President of the Youth Chapter of the NAACP at Whitney Young High School. Andrews helped to build a youth sit-in and march of over 3,000 protesters in downtown Chicago on July 11 against the police executions of Alton Sterling and Philando Castile.

John Beacham: The protest on July 11 in Chicago was amazing. Thousands of people, the majority teenagers, joined the sit-in in Millennium Park and then marched through the streets to Federal Plaza. Did you have any idea that you would be so successful?

Ashanti Andrews: Honestly, I didn’t think that there would be thousands of people with this. When we stood up to begin the march and later when I saw us on CNN on the national news, I realized just how important it is what we are doing.

JB: What’s your perspective on Black Lives Matter and the new movement against racism?

AA: This is history repeating itself. But it’s also a different time and it’s a different war. We are still battling against police brutality, but we cannot do the same things. Some things are going to have to be done differently. The Black Lives Matter movement has woken people up to the fact that racism is still alive in this country and that we are saying enough is enough.

JB: Before I ask you the next question, let me say briefly why I wanted to interview you for my blog.

All the protests that have happened in Chicago and around the country in response to two more cold-blooded police murders have been so important. Protest, resistance and organizing are essential for Black Lives Matter to be successful. But to me the youth led protest on July 11 sent an even more powerful message. It signified two very remarkable things to me: (1) Masses of people have clearly lost their fear of confronting the authorities in their pursuit of justice. They aren’t letting Dallas, or the media, or government officials or the police intimidation stop them and (2) Large numbers of youth are ready for mass action and movement organizing. Considering these two developments, I wanted to find some way to help amplify your voice and the voice of a new generation of fighters.

JB: I was wondering how you and your friends explain the racist police murders of Alton Sterling, Philando Castile, Rekia Boyd, Laquan McDonald and so many others to each other. How do you make sense of these crimes?

AA: The police are trained to kill. They have a racist mindset. Even if you follow the law like Philando Castile did, it doesn’t matter. He followed the law. I’m not sure what legislation we would need to pass to change such a racist mindset.

JB: Why do you think so many young people joined the protest on July 11?

AA: A lot of people under the age of eighteen are trying to get more active. As a group we are so upset. So, the protest just exploded on social media. For example, a friend asked me for help with the protest and I knew I had to help. I had to go. I had to be there. Everyone is ready to fight back and get organized. We are tired of waking up to new hashtags. People were retweeting like crazy.

Everyone is saying that “We need to put a stop to this so that the next generation won’t have to.” I’m doing this so my sister won’t have to go through this. This shouldn’t be happening and people want to do something. I have had more people join the NAACP club at our school in the last week than joined all of last year.

JB: The protests against racist police terror in Chicago have been incredibly multi-national. What do you think about that?

The protest was so diverse. If it’s not multiple races coming together, it’s not going to work. When slavery was abolished white people helped Black people. In the Civil Rights Movement white people were on the front lines getting beat alongside Black people. You have to have a united nations of sort. Black people just don’t make up enough of the U.S. population.

I also think that no change will happen in this country without everyone rallying behind the Black community. People have joined in this movement because they realize that.

JB: What do you think is next for the movement and for you?

AA: This protest is just the start. We can’t stop having rallies. We can’t let this flame die out.

We need everyone to see this—the politicians, the judges. We need them to see what will happen if they don’t make the correct decisions. The amount of proof we have of the injustices means we are going to keep this train going until we get justice. We must get justice.

We need to keep protesting this summer. We need to protest at the politicians’ houses. Just like Martin Luther King Jr., we need to go in certain areas where we know they don’t want us. The police don’t want us to be blocking traffic. They don’t want us stopping stores from getting business. But that’s the only way we are going to stop police brutality and racism. I want to march from one end of this city to the next. I also would like to start a think tank so that we can start coming up with solutions. This just has to end. Enough is enough.