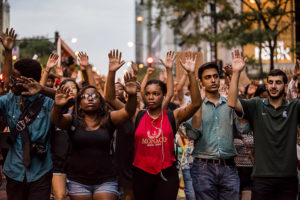 Protests against police terror are rocking Chicago again after Chicago police shot unarmed Paul O’Neal in the back, killing him.

Video released by the CPD does not show the murder. The disgusting video that has been released by the CPD shows cops high-fiving each other, joking about going on a desk-duty vacation, handcuffing the dying O’Neal like an animal and calling him a “B—–ass motherf—er.” The cops were also clearly seen on video lying about being shot at by O’Neal.

The attorney for Paul O’Neal’s family, Michael Oppenheimer, has called the killing a cold-blooded execution. The police have relieved the unnamed officers of their police powers.

Considering everything that has happened in Chicago and around the country around police murders in the past five years, and the fact that the Movement for Black Lives has become a dominant force in the United States, it seems unbelievable that the officers have not been arrested and charged with murder. Whoever fired the shot is clearly guilty with a capital “G.” That person should be in a cell right now, not walking freely among us.

Why has so little changed at the top of society while tens of thousands of people have taken to the streets to shut down freeways, police union headquarters, city halls and governors’ mansions?

Why is there a Paul O’Neal after Laquan McDonald? Why are the racist cops still lynching Black people in the streets of Chicago after the police superintendent was fired, the Cook County state’s attorney lost her job and Mayor Emanuel had to go on live TV before a special meeting of the city council and beg and cry to keep his job over the Laquan McDonald execution?

What can be done about cops murdering with impunity and a political system that from its very heights protects the right of racist police to be judge, jury and executioner?

Can the CPD be reformed at all? That’s the real question in my mind. Or, maybe a better way to put the question is like this: Is there any reform that will stop racist police terror? Body cameras? Training? Elected police oversight boards? How do you “police” police forces that have no respect for the constitution, laws, regulations or the lives of human beings?

Clearly, body cameras are no solution. They didn’t stop cops from murdering Alton Sterling, Paul O’Neal or so many others in cold blood. Even when we have evidence of the murder, the state does not step in unless the people rise up. When the state does step in they do everything, everything, absolutely everything in their power to let the cops walk. The case of Freddie Gray shows clearly that even when cops are caught breaking their own rules and a death gets declared a homicide, the chance that cops will pay for their crime is fundamentally non-existent. Cops just don’t get convicted of murder.

Am I against police reform? No, I am not. I salute and support all those fighting to change this rotten, racist system.

But the biggest structural problem we face in the struggle against racism and state violence, violence which includes the courts, the city council, the federal government and the enforced impoverishment of Black communities, is that the people with the money and the power in this country do not want to spend the money necessary to solve the social problems that lead to state violence and crime. They rely on the weapon of racism to enforce their rule. They are the ones who have militarized the police forces in order to keep oppressed people in a state of second class citizenship and greater poverty—all so they can increase their bank accounts.

People like Rahm Emanuel definitely do not desire the kind of social instability that has been unleashed by the torrent of video evidence we have witnessed over the last five years. In fact, that is their main concern, not the lynchings, not the racist cops, but social stability.

So, here’s another way to ask the question regarding the possibility of stopping police terror: How can a political system of such great economic inequality quiet the restlessness of masses of people who are oppressed and endangered merely because their skin is of a different color or they speak a different language? Can it do so without the day to day intervention of heavily armed, reactionary gangs in blue who go around killing, rounding up and sending people off to prison as a “job?”

The Black Lives Matter movement is challenging the very foundations of this society—a society that is white supremacist out of necessity. This challenge to the system is a major development.

The system is not reforming itself, let alone preparing to deal with any real changes in response to the new multinational anti-racist movement that has erupted. From Washington to Chicago the response has been all talk.

How will the young Black, Latino, Asian, Arab and white people who have hit the streets in protest against the entrenched and arrogant power brokers of this land react to those who refuse to respond to the cries for justice emanating from our streets and our schools? That remains to be seen. But there is every indication that a new generation of fighters will build a movement that will challenge the basic racist and capitalist foundations of this society.

I don’t see any contradiction between fighting for reforms and fighting to defeat the system. To do either, however, I say that we will be all the more successful if we build well-organized, revolutionary, multinational organizations led by workers and especially the most oppressed: people of color, women, LGBTQ people. We need organizations that are guided by the idea that we need real power—that 400 years of white supremacy and the rule of the rich must not be allowed to prevail over our streets, houses, jobs and schools any longer.