Party for Socialism and Liberation – Florida, spearheaded by our Pensacola and Tallahassee chapters, is organizing to provide emergency relief aid to devastated working class and oppressed communities across the Panhandle in the wake of Hurricane Michael. Several comrades have reported their experiences during their relief efforts. You can donate to our efforts here. 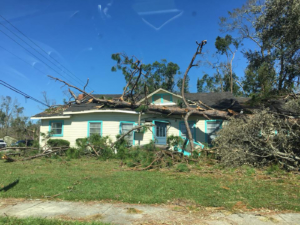 The further west our crews traveled, the more devastation we encountered. Downed trees became the norm, not the exception. Power lines hung perilously low to the ground, traffic lights swung pendulously a few inches above the tops of passing cars. Entire houses and barns were caved into themselves.

We first stopped in Quincy, where FLPAC has on-the-ground connections with the North Florida Educational Development Corporation (NFEDC) and Panhandle Area Educational Consortium (PAEC). NFEDC and PAEC have set up a supply distribution center and are working specifically to support migrant workers and rural communities in Gadsden County.

The Gadsden community is about 80 percent Black and brown, and has one of the highest poverty rates of all the Florida counties. Many of these workers are undocumented and do not qualify for FEMA assistance, or are scared to seek FEMA assistance due to the omnipresent threat of Border Patrol and ICE.

Our teams supplemented the haul from FLPAC and got to meet the amazing volunteers on the ground running the distribution center. Carolyn Ford, an organizer with NFEDC and FLPAC posited that there will not be power in the area for two weeks at least. The supplies brought from Tallahassee are a huge help, but our partnership with volunteers with Gadsden must continue into the coming weeks and months to ensure Florida’s most vulnerable communities as they are continually neglected by the state—County Commissioner Anthony Viegbesie says they still have not seen a single official relief agency.

We headed west to Bristol, where we found Mennonite Christian Aid Services doing the excellent and crucial work of providing free meals to the community. We chatted with some of the volunteers, who told us that the bridge over the Appalachicola river was in fact cleared. They suggested we cross the bridge to help the people in Blountstown, where they had gone the day before to survey the area. 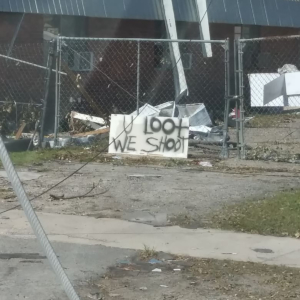 The scene in Blountstown was total chaos. In stark juxtaposition to the mostly quiet streets of Quincy, Blountstown was crawling with cops from as far as Seminole and Marion County. The cops were doing nothing to help the masses that had banded together on the side of the road, grilling outside demolished storefronts in a beautiful display of community. Instead, they prowled the streets in their air-conditioned cars, creating frenzied traffic and inspiring reactionary paranoia about “looters”. We saw multiple signs boasting violent threats such as “You loot, we shoot” and “Cameras are watching, loot and I’ll shoot you with my pistol.” 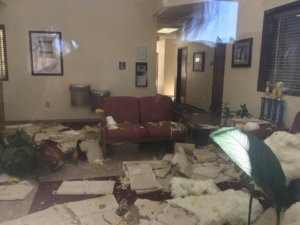 We visited Blountstown High School, one of the largest public institutions in Calhoun County. Every building was ravaged. Dingy yellow insulation foam pried from underneath the roof tiles was was strewn everywhere, as far as the eye could see – matted in the grass, twisted into the fences. Sunlight peaked into the front office through the patches in the roof, illuminating crushed drywall and more yellow insulation. We talked to a husband of a faculty member who said they were hoping FEMA would arrive soon with portable classrooms so school could resume soon. However, he expected it would take no less than three months to repair the school building enough for classes to resume inside.

He directed us to a supply drop-off point. Unfortunately, it was being manned by local cops. Fortunately, we were able to give tarps directly to a family who rolled up, rather than leaving them under the purview of cops who could arbitrarily harass, arrest or deny supplies to community members on the basis of race or documented status. One of the family members advised us to head even further west to Altha.

As we approached the small town, the roads became more and more blocked by downed trees. The forests surrounding us were halved – rows of trees snapped in half like toothpicks. It looked like a bomb had gone off. At some points, our car could barely stay on the road as we navigated around the downed trees.

The scene in Altha highlighted the deepest evils and paranoia of capitalism. The local police station was running a “supply distribution center” with a nominal number of bottled water cases. Meanwhile, Border Patrol cars sat in the gas station directly adjacent, ready to snatch undocumented people who might come for supplies, driven to desperation by the utter devastation. Locals reported that the majority of the folks there wouldn’t leave their houses. 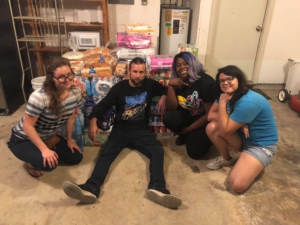 Sarah Brummet: I am from Pensacola in northwest Florida, and have lived there my whole life. My family is working class and has had no choice but to stay and weather every hurricane, including Ivan, which devastated and destroyed our city and forever changed our lives. Due to that experience, I thought I knew what to expect as our socialist solidarity brigade headed east toward Panama City to deliver emergency supplies to those in need, but I was utterly unprepared.

We arrived around noon on Friday, October 12, almost two full days after Hurricane Michael made landfall in the Florida panhandle. What we encountered was heartbreaking. The city is absolutely demolished. Unlike my experience after Hurricane Ivan, there were no signs of FEMA or the Red Cross in the areas we visited. The national guard was present, and appeared to be clearing major roadways but left individual neighborhoods inaccessible. Linemen were hard at work to repair the electrical grid, but from the looks of the damage it may be months before power is fully restored.

The entire county is completely without running water, so bathing is impossible and toilets no longer function. The police were out in droves but not to “protect and serve” the victims of this violent storm. Instead, they were posted in front of any intact (and even some damaged) storefronts, to prevent the people from scavenging for emergency supplies.

We ended up distributing our goods in a working class area, outside of a CVS, where another donor was already set up to distribute water. Baby wipes, tarps, and peanut butter were in high demand and we were out of all of them in under two minutes. As people crowded around us, I was struck by how concerned they were for each other, wanting to be sure that everyone got what they needed.  It was clear that the people will do what they can to care for each other, even as the state allows them to suffer without access to basic necessities.

RJ Hightower: The conditions of capital have reared their ugly head in Panama City, post Hurricane Michael. To me, the experience has left my heart heavy. 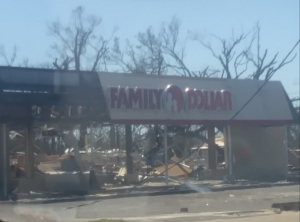 I watched people being arrested for looking for goods at a demolished Family Dollar. Cops with their lights on just sitting in front of destroyed stores, instead of actively engaging with the populace and attempting to help. It is has never been more apparent to me that the dogs of the oligarchs have no interest in helping anyone, and simply seek to damn working class poor further and further.

On a light note, I was so humbled by the people we donated to, and that we continue to work with. The people are kind, they are patient. When you and your peers have lost everything, it is amazing how kind people become. Everyone was so ready to take as little as possible so that others had an opportunity to get goods for themselves. We truly are all socialists in our own hearts.