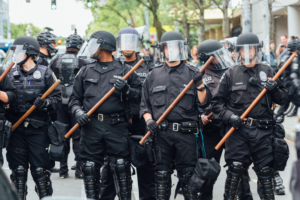 When Liberation News looked at the issue in October, 2017, when the consent decree was first being considered by Robart, the murder of Charleena Lyles by the Seattle police permeated the discussion surrounding the use of force by the police. Lyles was a Black pregnant mother who had called the SPD for help in a domestic dispute and was instead shot seven times by SPD officers. Judge Robart himself decided to take a look at the case, which had gone through the Police Force Review Board, before ruling on the consent decree.

His lack of comment on this killing, and his recent decision on the consent decree can only mean one thing: that the federal judge is in full agreement with the Police Force Review Board that declared unanimously on Nov. 15, 2017 that “the shooting [was] reasonable, proportional and within department policy”.

To the people who marched in protest, supported Charleena’s family, and have worked to change policing from the grassroots level for years, this was just another blow, and another indication that the Seattle Police Department cannot be relied on to hold itself accountable for its own crimes.

If a reduction in the number of murders by on-duty police officers had been the overall goal of the Justice Department intervention, then one could only call these reforms a complete failure. Instead, improved perceptions of the police and banal statistics related to the “reduction of force” are used as evidence for compliance with the decree. Such superficial metrics fail to address the problem in a meaningful way and do not indicate a significant reduction in police brutality in Seattle.

The vastly disproportionate number of people of color executed by police in Seattle is consistent with the pattern of police violence against people of color across the country. Far from being a new development, this dynamic between the police and the communities they oppress is, and has been, the status quo in the United States.

Only continued resistance by the people, from the grassroots, can lead to real systemic change in policing. It will not be handed to the people through consent decrees from the capitalist state. In the words of Frederick Douglass, “power concedes nothing without a demand”. Our demand is to stop the killings, disarm the police and bring them under the control of our communities and not the capitalist state.