Last week, Haiti’s major cities witnessed a 48-hour shutdown of industries across multiple sectors as labor unions and organizations across the country called for a general strike of workers and students. The strike was held in response to President Jovenel Moïse’s refusal to step down at the end of his constitutionally-bound presidential term on February 7. On that day, another powerful wave of protests swept the country as people bravely took to the streets in huge numbers despite violence and intimidation from authorities.

In addition to the issue of Moïse’s refusal to leave office, protesters denounced the corruption of his administration, poor living conditions, and police repression of protestors who have been calling for Moïse to step down. Widespread unrest against the government began in July 2018 in light of increasing gas prices and financial embezzlement, and has intensified in recent weeks.

Moïse, a member of the Haitian Bald Headed Party, a right-wing party reminiscent of the repressive Duvalier regime, has insisted on altering the nation’s constitution to allow him to stay in the presidency for another year. The country’s Superior Judicial Council declared yesterday that his mandate had expired, but nevertheless Moïse insisted on clinging to power. He also ordered the arrest of Supreme Court Judge Ivickel Dabresil along with over 20 others based on a vague accusation that they were involved in plotting a coup.

Conditions in Haiti ripe for revolt

Increasingly poor living conditions and a grossly inadequate government response to COVID-19 have left the masses of people destitute and disenfranchised. With nearly 60 percent of Haitians already living in poverty, the opportunities to survive through the informal sector have been diminished and increasingly made more dangerous amid the pandemic. To make matters worse, the country only had less than 50 ventilators at the start of the crisis.

The extreme deficiencies in national infrastructure and social programs have especially caused outrage in light of the PetroCaribe scandal. Moïse’s predecessor, U.S.-installed president Michel Martelly, embezzled, misspent and “misplaced” the nearly $4.3 billion in the Venezuelan solidarity-based PetroCaribe fund originally allocated for the nation’s infrastructure development. A Haitian court found that Moïse received millions of dollars from this scandal, and it is speculated that further funds were utilized by Martelly to assist his protege Moïse in his ascent to power in 2017. Today, Moïse continues to obstruct the investigation of the theft, which is one of the main reasons protesters continue to demand “Kote kòb PetroCaribe a?” – “Where’s the PetroCaribe money?” and Moïse’s ouster.

Poor living conditions have prompted a wave of kidnappings for ransom across the country as people struggle to survive and Moïse fails to take action to rectify the root causes of grave social problems. Repression from the national police has only made the situation worse for the Haitian people.

On Martin Luther King Day, international demonstrations were held in solidarity with the tens of thousands of Haitians who marched to the Capitol demanding Moïse step down. In response, Moïse banned marches in certain common areas for protest and ordered police to be in a “state of maximum alert” through February 15. Despite intensifying police violence, tens of thousands of Haitian workers, students and members of opposition parties continue to take to the streets to demand a transitional government hold free and fair elections, and that drastic judicial reforms are made in light of continued corruption by U.S.-backed, pro-corporate administrations.

U.S. and Moïse out of Haiti!

Since January 2020, Moïse has ruled by decree after dismissing the Haitian parliament. As a Moïse-appointed committee prepares to rewrite the nation’s constitution in his favor, Moïse’s new national security force, the National Intelligence Agency, remains protected by legal impunity from the countless human rights atrocities committed against the rising masses of Haitians. While Moïse lacks popular support, particularly amongst the vast majority of poor and working Haitians, his increasingly authoritarian power grabs continue to be backed with money and political support by the U.S. government.

The threat of U.S. intervention in response to the extreme instability looms large given the long history of the United States attempting to thwart the emergence of a sovereign Haiti that represents the aspirations of people of African descent for freedom and self-determination. Thirty five years ago to the day – February 7, 1986 – a massive uprising of the Haitian people ran the infamously repressive Duvalier regime out of office — a regime that was similarly backed by the U.S. government despite unthinkable atrocities being committed throughout the nearly 30-year dictatorship. In 1964, the constitution was amended by Francois “Papa Doc” Duvalier to declare himself “president for life.” Today, Moïse attempts to rewrite the post-Duvalier-regime constitution in a similarly dictatorial manner.

Following the ousting of the Duvaliers, massive mobilizations of Haitians subsumed the nation for years, seeking to destroy the remnants of the nation’s neo-colonial history and finally bring about justice for the Haitian people. And in response, imperialist powers – worried at the scale of the revolt – installed a new face but left the larger system intact. After two U.S.-backed coups against democratically-elected liberation theologian Jean Bertrande Aristide later, the modern tactics used under the Moïse administration resemble the terror tactics of the Duvaliers’ Macoute death squads. Alongside the demands for Moïse to step down, protesters are insisting on sovereignty from international meddling – namely, from the United States.

The people of Haiti continue to struggle for a complete uprooting of the misery and repression endemic of capitalist, neo-colonial rule over the nation. So long as Moïse refuses to step down from the presidency, and as long as Haitian leaders continue to be puppets for imperialist powers, the struggle for a free Haiti will continue. 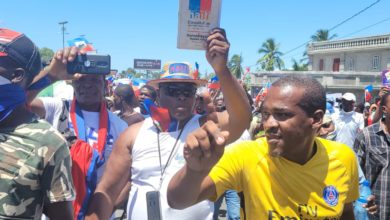 Haiti: No to U.S. intervention in wake of Jovenel Moïse assassination 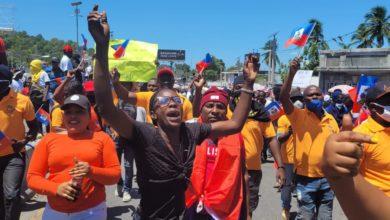