The Coronavirus Aid, Relief and Economic Security (CARES) Act, which passed nearly unanimously on March 27 by Congress and was signed into law by President Trump, is not nearly enough to solve the massive problem facing working class people. Even worse, it constitutes a massive act of robbery because it transfers $454 billion of taxpayers dollars (and potentially 10 times that amount!) to the big corporations and banks.

All the resources to take on this crisis exist; what’s lacking is the political will to use them. Click here to read the PSL’s People’s Program to Fight the Virus.

The highest number of confirmed cases of COVID-19 are now in the United States. The Centers for Disease Control have reported that as of the writing of this article there are 122,653 total confirmed cases of COVID-19 and that 2,112 have died from it [Editor’s note: As of April 13, there are 572,169 confirmed cases and 23,070 people who have died in the United States]. Other sources estimate vastly higher figures — without mass testing, we can not know how many more people have already been infected. Hospitals are overflowing with the sick and according to The New York Times, first responders are already deciding who they have the resources to try to save and who will have to be left behind in New York City.

Additionally, a record breaking 3.3 million people filed for unemployment benefits in one week [Editor’s note: As of April 10, there are 17 million newly unemployed people]. This is also likely an undercount as many people were unable to submit their applications because state websites crashed due to the extremely high levels of traffic.

People are suffering and frightened. If the government continues its inadequate response the situation will continue to get much worse. Yet members of Congress are celebrating the passage of the bill as if they were heroes.

The real heroes are the doctors, nurses, EMTs, grocery workers, delivery drivers, janitors, sanitation workers and so many others risking their lives in this fight. The CARES Act is a massive giveaway for the rich and a measly handout for the workers who are paying the price for this crisis which they had no part in creating.

Here are five things workers need to know about the CARES Act:

The way the CARES Act works, hospitals will get $130 billion, which sounds like a lot of money. However they will then have to take this money and go into the capitalist marketplace to buy all the things they desperately need to save the lives of patients and healthcare workers, like ventilators, masks, gowns, gloves and so on.

Most of these items will still be sold at market rates so that the manufacturing companies will be making a profit. This will limit the quantity of supplies hospitals will be able to get because rather than paying for the items at cost they will have to purchase items at an inflated price.

Additionally with limited supply some companies are even taking advantage of the situation further and charging a higher than usual cost. One badly hit hospital in Albany, Georgia has reported having to purchase N95 protective masks at $7 per mask rather than the regular 58 cents each and they have even turned to the underground market to purchase badly needed supplies.

This is a sad, backward and contradictory way of providing for hospitals during a pandemic. What is desperately needed is the use and expansion of the Defense Production Act to control the prices and supplies of medical equipment.

After refusing to use it, Trump finally invoked the DPA in a very limited way in the contract between auto giant GM and ventilator company VenTec to make about 10,000 ventilators a month. The DPA needs to be utilized more to compel companies to produce vitally needed materials at cost, controlling prices and managing distribution based on a scientific assessment of need, not the ability of one hospital to outbid another in the marketplace for vitally needed supplies.

David Dayen has explained the criminal nature of this part of the CARES Act well in American Prospect. He wrote that the bailout, “includes $454 billion for the Treasury Department to hand over to the Federal Reserve. (This was initially $425 billion but they topped it up in the final bill.) That money could then be placed into a “credit facility” and levered up 10-1, creating a $4.5 trillion money cannon aimed at the largest corporations in America.”

This larger figure is the real story behind the bill and it’s getting virtually no coverage.  Corporations get to walk away with $454 billion dollars and potentially trillions more in federally backed loan guarantees. It’s hard to even comprehend this vast amount of money. One trillion is a million million, or a thousand billion. It’s enough money to buy a million dollar apartment for everyone in San Francisco.

This has happened before. After the 2008 financial recession the Obama administration issued the TARP (Troubled Assets Relief Program) which included a $700 billion bailout for the banks and trillions more in federal backed loan guarantees. To this day the banks have never had to account for what was done with all the money.

The Democrat and Republican Parties alike support these criminal transfers of wealth. As Dayen put it, “The bill as written initially would have made all bailout activities secret for six months. Democrats balked, called it a slush fund and worse, and then agreed to a few mostly meaningless bits of oversight and some promises to help ordinary people. In fact they’re the same bits of oversight from the 2008 TARP bailout: a five-member oversight panel and an inspector general for the program.”

So, in all, the same amount of “relief” is going to the big corporations initially (and potentially 10 times as much) as is going to the entire working class population. Corporations are not people and do not deserve any relief! Instead, these companies could be nationalized so that employees’ jobs will be protected and the enterprise’s resources used for the public’s benefit.

Obscuring the corporate bailout, mainstream media headlines focus on payments to individuals. The CARES Act will provide a one-time $1,200 payment to individuals and $500 for each child dependent. However this is not enough money to get by.

In May of 2019, CBS News reported that the average cost of a two bedroom apartment was $1,180 per month. According to Lendingtree, “The average monthly mortgage payment in the United States is $1029”. On average the payments will barely cover housing costs. This does not take into consideration costs for utilities, groceries, car payments and other expenses.

In addition the government could and should cancel rent and mortgage payments during the crisis and institute debt forgiveness. Health experts all agree that the only way to defeat this virus is for people to stay home, avoid contact with others and not spread the illness. It is a medical necessity that all people have a home. Landlords and banks should not be profiting off of this need.

#4: Not everyone will get a check

While corporations and banks skip to the front of the line, many working class and oppressed people are left out entirely.

The payments will be made according to information from tax filings made in 2018. If a person has a bank account on file with the Tax Board, it will be deposited directly into the account. However, it will take “several weeks” for the money to arrive and meanwhile bills are due on the first of the month. Additionally, it is not clear what will happen for people who did not file taxes in 2018. For people who do not have a bank account, they will be mailed a check which could take several months. According to the Associated Press, roughly 14.1 million adults did not have a bank account in 2017.

Cruelly, undocumented people are excluded from any of these benefits. COVID-19 will infect anyone, no matter their nationality or immigration status, so why should they not be included? White supremacy and national oppression can not be allowed to distort what should be a medical, scientific and humanitarian response from the government.

And what of people who are incarcerated, are they being addressed by this act? Already COVID-19 cases have been found in prison systems. The virus could spread like wildfire due to crowding and lack of sanitation in these facilities. Without a focus on the health of the 2.3 million people incarcerated, the virus could enact its heaviest toll among prisoners. People have been organizing for the rights of incarcerated people and their families during this crisis. We must continue to demand that no one be left behind.

#5: Enhanced unemployment benefits still not enough, leave many out 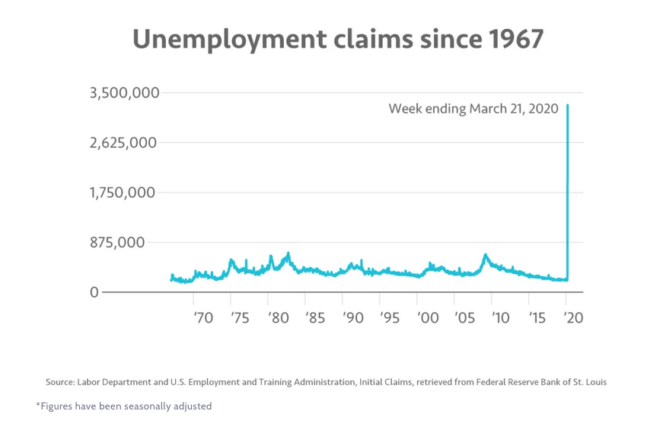 The changes in unemployment benefits are among the more far-reaching and positive aspects of the bill.

Due to the overwhelming magnitude of recent job losses, the capitalist class had to concede to some reforms. Last week a record breaking 3.3 million people filed unemployment in just one week [Editor’s note: As of April 10, there are 17 million newly unemployed people]. This is more than 3 times the previous all-time record in 1982 of 695,000 people. President of the Federal Reserve Bank of St. Louis, James Bullard, has predicted the U.S. unemployment rate may hit 30 percent.

The changes and expansion of unemployment is a welcomed and needed reform and shows that change is possible. We call on people to organize and fight for more and permanent relief for the unemployed.

However there are still limitations. Unjustly excluded from coverage are the undocumented and others paid “under the table.” Additionally, the bill does not compensate for any healthcare insurance benefits jobless people lost through the employer.

While the COVID-19 crisis sparked this economic disaster, its extreme severity is due to pre-existing weaknesses within the bloated financial system, which periodically experience crises due to the very nature of capitalist production. Temporary unemployment benefits are not enough to solve this crisis.

In other countries, even capitalist ones like Denmark, instead of just providing unemployment companies are being required to keep their workforce on staff. In exchange the government is compensating companies for income lost and are covering the essential costs of business like rent while the companies are inoperable.

The unemployment benefits and checks to individuals pale in comparison to the giveaway of more than $450 billion for big business — or $4.5 trillion, but who’s counting? More than ever, this crisis reveals who the real “essential workers” are in our society–healthcare workers, janitors, delivery workers, agricultural workers, grocery store workers, teachers and more, not the greedy parasites who take and take while contributing nothing of any social value.