On Wednesday, Sept. 6, union staff, faculty and students held a rally at the Florida Polytechnic University campus in Lakeland. This rally was held to speak out against the university’s administration and President Randy Avent for their anti-union tactics.

United Faculty of Florida, which represents the faculty, won the right to unionize by a 38-6 vote back in 2016. We are nearing the end of 2018 and the faculty is still waiting on their first union contract. They currently have 60 percent membership, which is a remarkably high number for educators in STEM (Science Technology Engineering and Math). However, Avent refuses to come to the negotiating table in good faith, and his retaliation methods are nearly unheard of in the education field.

Avent recently decided not to renew the contracts of two engineering professors who were members of the bargaining team. Christina Drake and Christopher Coughlin have been praised for their work and are beloved by their students. Both professors have unblemished records, receiving numerous teaching awards and prestigious grants. On Aug. 15, just days before the start of fall semester, they were notified that they were being let go via email with no justification. Drake and Coughlin were both previously targeted by the university for protected union activity. 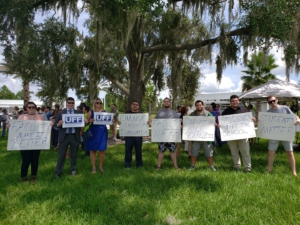 In July, Avent fired two other active union members; one of them being Casey Fox, the only wellness counselor the university had on staff. Avent claimed that the current system the university had in place was inefficient, and that Fox could not see all of the students. He replaced Fox with student workers and a case manager. Florida Polytech alum Veronica Perez-Herrera said that the on-campus counseling service was very helpful for her when she was dealing with her own issues, and that it saddens her to hear what is currently going on at her alma mater. “It’s sad when I hear from my student worker friend who was approached several days ago by a fellow student. They asked for mental health counseling, and asked what they could do. The student worker was only able to give them a pamphlet and wish them good luck.” Shortly after Avent fired Fox, Kevin Masculine, a senior at Florida Polytech, shot and killed himself outside on a campus bench. Who is to know if Masculine would have reached out to Fox for help? What we do know is that Fox was not there, solely because of Avent’s retaliation tactics.

At the rally, David Foster, a professor at Polytech, told Liberation that Avent has made strategic hirings to sabotage union progress among the faculty. Many of the new faculty members are immigrants with visas, and hope eventually to have permanent residence and citizenship. These professors know that they are being mistreated by the administration and want to do something about it but cannot openly support the union. They fear the administration’s retaliatory tactics that have ruined the careers of many of their colleagues. Their choice is bleak: be quiet and keep their head down or get fired and deported. 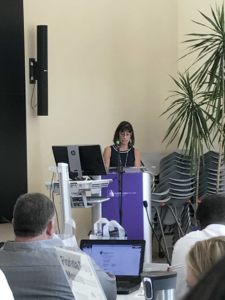 Shortly after the rally, the crowd funneled into a board meeting to confront the trustees and president head on. Joanne McCall, president of the Florida Education Association, addressed the board, “Our members have been confronted with a level of hostility and disrespect that we have not experienced on any other campus. What is happening on the Florida Polytech campus is alarming. The administration has damaged the morale of faculty and has undermined the learning environment for the students.”

The faculty of Florida Polytech are standing up to their bosses, who are only interested in profit. They are risking their livelihoods for the good of their fellow colleagues and their students. These faculty members are an inspiration because they are publicly fighting back knowing that they have a target on their backs and at any moment they could be fired. Progress against the capitalist class has been made only through the unity, solidarity and courage of workers.

Currently, United Faculty of Florida has a petition that has garnered around 700 signatories. The petition asks to “reverse the terminations of the on-site counseling position and the assistant librarian” as well as “the non-renewals of Engineering faculty, and a host of support staff who were terminated for arbitrary and/or retaliatory reasons.” It also asks for a “[the reversal] of the outsourcing of full time on-campus mental health services and [the utilization] of the expertise of SUS mental health experts to return to a model that has both on-campus full-time counselors and supplemental care.” You can sign their petition at https://petitions.moveon.org/sign/stand-with-the-faculty.