A movement to free a well-known activist has erupted in San Diego. Denzel Draughn, a community organizer, was arrested in Downtown San Diego on the evening of August 28 during a rally in solidarity with protests in Kenosha.

District Attorney Summer Stephan—who was the target of a recent action demanding justice for police brutality victims—charged Draughn with 19 felonies. The charges include nine counts of obstruction/resisting arrest, nine counts of using tear gas against an officer, and one count of possessing a tear gas projectile. Stephan set an original bail amount of $750,000. To put this amount into perspective, the original bail for Minneapolis police officer Derek Chauvin who killed George Floyd was originally set to $500,000.

Scores of local residents rallied in defense of Draughn the following day—and have continued to do so every day since—outside the San Diego County Jail. After the first two days of protests, the bail was lowered to $200,000. When legal representatives attempted to pay the bail and turn in the necessary paperwork, the amount was raised to $750,001. Organizers on the ground claim that this is a violation of due process. The cops are clearly trying to make an example out of Draughn and intimidate other local activists.

Draughn has reportedly been subject to beatings, torture, and other forms of cruel and unusual punishment while in jail. For example, detainees who have been released from the jail in recent days claim that guards placed Draughn in solitary confinement before cuffing him to a chair and putting a spit hood over his head. In a similar situation, Daniel Prude, a resident of upstate New York, was suffocated to death by Rochester police officers who covered his head with a spit hood in March.

The following five demands have been issued by Draughn’s family and comrades in response to these violations of his civil liberties:

If you would like to help contribute to the struggle for Draughn’s freedom, you can join the Party for Socialism and Liberation, International People’s Democratic Uhuru Movement, and other organizations outside San Diego County Jail for ongoing protests. There will be an action on Saturday, September 5 at 2 pm. You can also donate to $ParrishDavis on CashApp, @Parrish-Davis on Venmo, or to the Dede McClure Community Bail Fund. 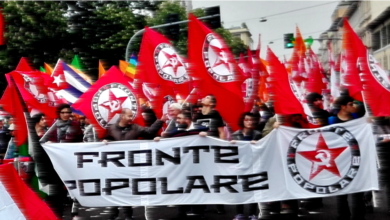 Popular Front (Italy): Solidarity with the political prisoners of the anti-racist struggle in the USA!