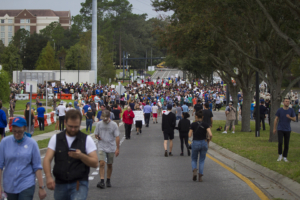 On October 19, at least two thousand people descended on the Curtis M. Phillips Center for the Performing Arts at the University of Florida in Gainesville to protest white nationalist Richard Spencer. Organizers started preparing the massive “No Nazis at UF” protest in August, about a week after the “Unite the Right” rally and terrorist attack in Charlottesville, Virginia, when Spencer requested to rent space at the university. 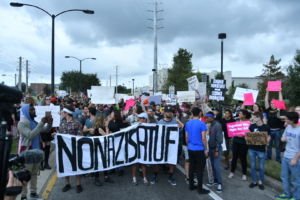 “And then we saw that Fuchs was spineless and caved in. We ended up spending half a million dollars to pretty much coddle these Nazis. They allowed Spencer to dispense tickets, they allowed Spencer to choose which press gets inside,” said Niko Thomas, a student at UF and one of the protest’s organizers.

The university announced before the protest that it would spend at least $500,000 to pay the “University of Florida Police Department, Gainesville Police Department, Alachua County Sheriff’s Office, Florida Department of Law Enforcement, Florida Highway Patrol and other agencies.” Governor Rick Scott also activated the National Guard when he declared a state of emergency.

While law enforcement agencies militarized before the event, the UF Police Department released a list of prohibited items at the protest, banning weapons but also megaphones, water bottles, backpacks, anything that could be worn as a mask, umbrellas, and “any other items that campus police determine pose a risk.” Florida Legal Services and the Partnership for Civil Justice Fund explained in an open letter to the University and its police department why the list contained a range of constitutional rights violations. 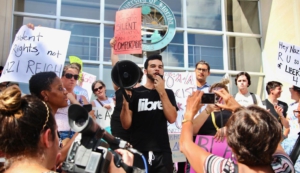 Earlier in the week, a coalition of students and faculty under the banner of #NoNazisAtUF held a press conference to decry the university’s decisions. They demanded that Richard Spencer’s event be canceled; that if the the event were allowed to go on, that the university do more to protect the free speech rights of protesters and, finally; that if these demands were not met, that President Fuchs step down.

“We made our demands in front of the library in the free speech area. Thereafter we marched on Tigert Hall, the administration building, and tried to force them to concede to our demands and see the President. They locked the doors and called the police on us,” said Thomas. “Meanwhile, you have these frat dudes across the street wearing MAGA hats and laughing. They’ve [the university administration] enabled Nazis to the nth degree.”

“The president of the university could have said, ‘No, you can’t speak here, it’s too dangerous.’ It would have been a lot safer to have a lawsuit, but having a bunch of cops on campus makes the situation even more dangerous for marginalized students,” said Nate Quinn, Vice President of Pride Student Union. “Most people don’t agree with the decision that the president made to let Richard Spencer speak here. He’s a liberal. He wants to let everyone speak, even if it’s harmful, even if people are going to die or get hurt.” 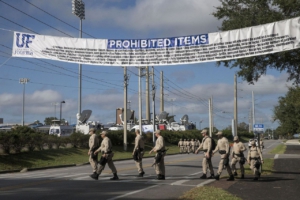 At the protest, police blocked off all the surrounding streets with large trucks and trailers. Piles of personal belongings—water bottles, backpacks, cigarettes, food—accumulated at the checkpoints, where police searched demonstrators for prohibited items. When this author asked one police officer what right she had to turn away students for having keffiyehs, the police officer responded, “Didn’t you hear? It’s a state of emergency.”

Thousands of people, students as well as activists from around Florida and the South, poured onto Hull Road. Chanting “Black Lives Matter” and “Hey hey, ho ho, these Nazi scum have got to go.” Demonstrators gathered in huge, militant crowds outside the performing arts center and the Harn Museum of Art. Signs said “Gators not haters,” “Hate speech isn’t free speech” and “Fuck Nazis.”

“Spencer is proposing policies that were proposed by Nazis in the early years of the Third Reich. They wanted to get rid of the Jews, everybody knows that. At first, they didn’t necessarily want to do it by killing all of them. They had ideas about like ‘We’ll send them all to Madagascar, we’ll send them back to wherever,’ the same way Richard Spencer talks about minorities here,” said James Morgan, a freshman at UF. 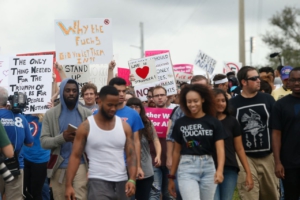 Reem Zaitoon, a member of Students for Justice in Palestine, FSU Chapter, held a Palestinian flag and led a group of people in a chant of “Free free Palestine!” Meanwhile, inside the auditorium, Spencer told the audience: “The most important and perhaps most revolutionary ethno-state, and it’s one that I turn to for guidance.…is the Jewish state of Israel.”

Police and State Troopers, equipped with gas masks and teargas grenade guns, formed a long barrier between the protest and the speech. Snipers set up a tent on the roof of the museum while a police helicopter and drones circled above them. Meanwhile, Identity Evropa, a white supremacist group in the “alt-right” movement, distributed tickets as they saw fit, including according to people’s race. 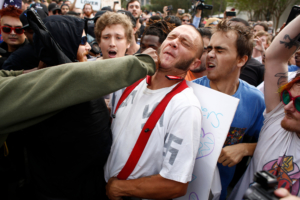 Inside the auditorium, Spencer suffered a humiliating defeat. Less than twenty Spencer supporters, sitting as a group near the front for police protection, attended the talk. The majority of people inside the largely empty auditorium were protesters who raised their fists and refused to let him speak. After jeering at protesters for a while, Spencer opened it up for public questions. One question said it all: “Why are you still here?” 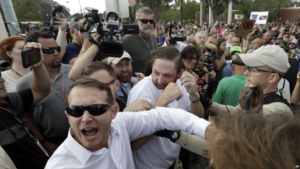 Meanwhile, in the streets, one man wearing red suspenders and a shirt with swastikas walked into the crowd. Protesters punched him in the face and took his suspenders. Another Nazi also received a powerful blow to the face. When the speech let out, the giant protest waited for Spencer’s supporters. Some made it out with police escort, while one Nazi ran and jumped a police barricade, preferring arrest rather than the wrath of the crowd.

About an hour after the speech ended, three white supremacists who traveled from Texas, Tyler Tenbrink, William Fears and Colton Fears, pulled up their Jeep to a group of protesters, shouting “Hail Hitler!” and other chants at protesters. When a confrontation started, the Fears brothers began shouting “Kill them!” to Tenbrink. Tenbrink fired a shot at protesters but hit a building. Protesters got their license plate as they sped away and the three men were later arrested and charged with attempted homicide. 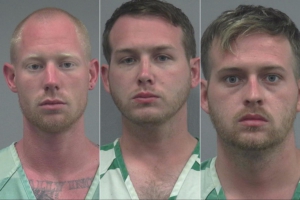 After Thursday’s act of terrorism in Gainesville, Ohio State University denied a request by Spencer to rent space due to substantial risk to public safety. At the same time, at least one petition demanding UF President Fuchs’ resignation began to circulate with the hashtag #KentFuchsStepDown. It remains to be seen whether Fuchs will meet the final demand expressed at Monday’s press conference of students and faculty: resign.