In Dayton, Ohio, an ordinance ostensibly written to promote “pedestrian safety” was put before the City Council. It requires pedestrians to remain at least three feet away from motorways at some 51 intersections throughout the city or risk being ticketed.In addition, the ordinance outlaws “loitering” on medians and traffic islands. Its effect will be to contribute to the criminalization of the most vulnerable people who are asking for help on the street.

On May 24 Dayton’s mayor, Nan Whaley, told the Dayton Daily News, “The ordinance strikes a careful balance between increasing public safety and the need to protect everyone’s right to free speech.” Despite this line from the mayor, on May 15, Joseph Mead, a professor at Cleveland State University and a member of the ACLU Ohio told the DDN, “They are trying to find a Constitutional way to do an unconstitutional end, which is basically targeting people based on their request for help.”

In 2011, Dayton had heavy restrictions on panhandling and instead of ticketing so-called “violators,”  jailed them. From then until 2016, over 1100 panhandlers were jailed in Dayton. Dayton was forced to change that law following a July, 2015 U.S. Supreme Court decision that ruled that such restrictions were a violation of free speech. So it appears that the City of Dayton is continuing its efforts to push the poor out of the city by refocusing on alleged public safety concerns.

War on the poor: A bipartisan issue

The passage of this ordinance will allow its supporters to hope, with futility, that the people affected will now seek aid through county agencies and non-profits. However,  the Trump administration planned has cut the HUD budget to the tune of $6.2 billion nationally. As a result,  Montgomery County saw a loss in $10.8 million in funding for the 2018 fiscal year. These budget cuts will have a drastic and long-lasting effect on agencies serving the homeless, including Montgomery County’s Continuum of Care.

Dayton has been, and currently remains, a city run by the Democratic Party. Dayton’s “panhandling” ordinance only exacerbates the issues the poor and homeless face and proves, yet again, that the Democratic Party, like the Republican Party, does not serve the interests of the people.

Once known as the “Gem City,” Dayton has been featured in primetime coverage for its opioid crisis. In 2016, 349 Dayton residents died from overdose. In 2017, that number rose to 559; a 60 percent increase in one year. The problem was so bad that the Montgomery County Coroner did not have enough space in the morgue and had to rent out freezer trucks to house the deceased. Even the notorious Montgomery County Sheriff, Phil Plummer, (whose jails, along with others around the country, have caught the attention of the United Nations due to brutality towards restrained inmates) cited lack of drug treatment options as a contributing factor in the opioid crisis throughout the county.

This past April, Dayton saw the closure of its last remaining ful-service grocery store on the West side of the city, home to predominantly non-white residents. This store closure will force Dayton’s West side residents to now travel four miles to the nearest full service grocer. Dayton has had the problem of being a “food desert” for years, but this makes the problem exponentially worse.

Graham Moor, a member of Socialists of Dayton, stated, “This is a thinly veiled attempt to do nothing about underlying issues of homelessness, while removing them from sight so the administration can pat themselves on the back. Gentrification is not an answer to poverty.”

For the people to live, capitalism must end

As the global balance of forces has shifted during the past four decades, wealth and resources have been redistributed upwards from workers to capitalists. Consequently, real unemployment rates throughout the U.S. have skyrocketed, along with homelessness, opioid addiction and a wide slew of other social ills. With the restructuring of capitalism, many former centers of production, especially in urban communities, have been abandoned and left to crumble.

Along with escalating poverty and human suffering, the number of millionaires is also increasing, Ohio is no exception. In the never-ending search for investment opportunities, capitalists have been reinvesting in degraded urban areas, marketing development projects to young professionals as  the new residents. In Dayton, Ohio the official process is called “community revitalization.” The initiative to “revitalize” Dayton’s downtown necessarily includes so-called “clean-up” initiatives designed to push out the poor and oppressed.

One of the stated goals of revitalization is to raise property values by 25 percent, which will contribute to expelling the working class. This process also tends to include forcing homeless people out of downtown areas by criminalizing “panhandling.” The city of Dayton continues to pursue this agenda with this new ordinance. 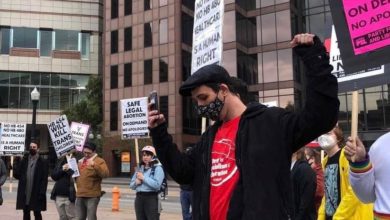 Ohioans rally in Columbus against right-wing attacks on health care