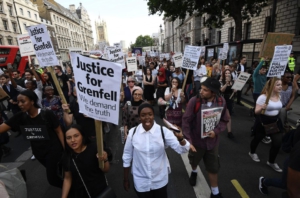 On June 14, just after midnight, a fire broke out on the fourth floor in Grenfell Tower, a 24-story public housing project located in West London, which around 600 people called home. The majority of Grenfell residents were sound asleep as the fire jumped from the fourth floor to the top floor in just 15 minutes. One eyewitness told London’s Channel 4 local news that Grenfell “just lit up like a matchstick.” Desperate to survive, some residents began to jump out of windows, while others screamed for help. A woman reportedly threw her child out of a window, in an attempt to protect him from the turbulent flames. Although the death toll has not yet been confirmed, it is expected to rise to over 100, with dozens still missing.

Most who perished, or who lost everything in the flames, were working-class people of color. They were Arab, Muslim or African. They were European migrants, Black British, refugees, and asylum seekers, sharing the tower with the poor white working class of London. Meanwhile, multimillion-pound properties with their perfectly manicured front gardens stood under the shadow of the still smoking, charred block. Grenfell Tower is austerity in ruins. The horror of poor people burned alive just feet from some of the country’s most expensive mansions, many of them empty moth-balled investments, perfectly captures the devastating effects of capitalism.

There are around 4,000 similar public housing blocks in the UK, most of them built in the 1960s and 70s. They were built basic: concrete frame, concrete columns on the outside. The majority of public housing units are located in areas that have started to gentrify. Kensington, where Grenfell Tower is located, along with Chelsea, have a higher proportion of high earners than anywhere else in the country. More people work in banking there than anywhere else in Britain. These residents, in their luxury apartments, considered the concrete tower an “eyesore.”

Grenfell is owned by the local wealthy borough of Kensington and Chelsea, and when the wealthy neighbors began to complain about Grenfell, the borough contracted the Kensington and Chelsea Tenant Organization, KCTMO, to refurbish the tower in part to increase the number of apartments available for private rent or sale. KCTMO then embarked on an 8.6 million pound renovation project to improve the “aesthetic” of the tower. The project involved wrapping the building in an aluminum cladding so that it would blend better with the luxury towers nearby. That work left the tower with just one staircase and exit — an exit that the management company failed to keep clear.

With gentrification also came an overshadowing of the diverse working-class community in the local council by their elitist neighbors. Grenfell residents did not have much of a voice in their local council. In the last parliament, only 6 percent of the members were people of color. Yet, they were trying desperately to make their voices and concerns for their safety heard. For years, the tenants had been raising concerns about how the KCTMO was cutting corners on safety and refusing to listen to their concerns. These concerns included lack of sprinklers and fire alarms, smoke coming from electrical appliances and outlets, the state of the fire escapes, and the elimination of a car park, which slowed emergency response vehicles from getting to the tower during the fire. However, the tenants were silenced by a system that prevented them from being heard. Those that were the most persistent were threatened with legal action for defamation, which had the effect of discrediting their claims of neglect and mismanagement.

Ignoring the Grenfell residents’ concerns, KCTMO chose to “renovate” a building for poor people in the most unsafe way possible to save money. For just 5,000 pounds more, KCTMO could have used fire-resistant cladding on Grenfell Tower.

While the nature of the fire is still unknown, the conditions that made it possible are not. Since Margaret Thatcher introduced right-to-buy in 1980, public housing and its tenants have been undermined and sidelined. Right-to-buy released many previously publicly owned units onto the private market, which allowed long-term public housing tenants to buy their apartments at a discount. Many quickly re-sold at a mark-up soon after. As a result, the most desirable projects ended up in part-private ownership, such as management organizations and tenant management organizations. This was justified by claims that management of public housing would improve, bureaucracy would be done away with, and responsiveness to tenants would increase.

The result: local government has become distanced from housing facilitation, central government funding for social housing has been reduced, and the involvement of powerful private companies has increased. Regulation and “red tape” were called enemies of entrepreneurship. They were characterized as intrusive and undesirable, while the private sector was commended as the epitome of efficiency.

In 2011, former UK Prime Minister David Cameron initiated a “Red Tape Challenge,” which intended to slash and burn much of the UK’s safety regulations. The “Cutting Red Tape” legislation was part of the Tory conservative party plan to abolish a ‘health and safety’ culture they claimed was hurting money-making businesses. On the UK government website, a statement from Business Secretary Sajid Javid says: “This government is delivering on its commitment to free firms from 10 billion pounds of heavy-handed over-regulation and build a more productive Britain. Hundreds of businesses responded to our Cutting Red Tape reviews and we are taking decisive action based on their experiences.” The UK government is blatantly telling the people of the UK that they are not interested in them, but instead, listening to firms’ and businesses’ concerns.

The “Cutting Red Tape” move cut more than 2,400 pieces of regulation, including many fire regulations. For example, fire safety inspections had been reduced for some companies from six hours to just 45 minutes. Imagine, only taking 45 minutes to inspect a 24-story, 120 unit housing tower. Just this year, the Conservative Party voted down a bill that would have required to make landlords provide liveable housing, and it is easy to understand why: 39 percent of Tory member’s of parliament were landlords, with nearly a quarter of members of parliament across all parties owning rental properties. The Tory government wants to see social housing privatized while poor people continue to be forced to live in unsafe housing and have their very real concerns about safety and quality ignored.

Grenfell Tower is not the first fatal fire fueled by a terrible for-profit system. A 2011 report found that three quarters of Britain’s social housing blocks were potentially unsafe in a fire. In 2009, a fire in Lakanal Tower, at that time considered the worst tower fire in London, killed six people and severely injured dozens. The Lakanal fire also could have been prevented by proper fire-safety checks. After the Grenfell tragedy, 75 buildings have been tested for fire safety and they have all failed.

So what is the UK’s plan moving forward? Many of the victims, after losing all they had, some even family members, have been sleeping in cars and in parks because they have no where else to go. They are even still being required to pay rent! Meanwhile, the council continues to issue press releases while the leader and the deputy leader of the council go around giving press interviews, ignoring the fact that the relief effort is failing.

What should replace Grenfell?

London’s mayor, Sadiq Khan, is in favor of tearing down public housing skyscrapers. However, he does not offer a substitute to replace the towers with the same number of apartments at the same price to the renters.

Some have suggested not building any more public housing towers, and instead building more street level housing. However, housing in London, like in downtown Los Angeles, is in such high demand that there’s very little “street level” housing available, so renters either are homeless, forced to rent miles further away, or stick to renting in existing unsafe “tower” housing.

And where is Theresa May during all of this? On June 14, the day of the fire, she said nothing at all until 6:30 that evening. The following day, she ventured out to the scene of the disaster where she congratulated the emergency services on their inexhaustible efforts, but made absolutely no contact with the affected survivors, nor the workers and volunteers who poured in to the area to help in any way they could.

Less than an hour later, Jeremy Corbyn arrived. He listened to people and promised to find out the truth. He told them he would speak for them. And he did. He stood in front of parliament and called the Grenfell tragedy a “disastrous effect of austerity,” and demanded Theresa May provide the resources needed for working-class communities to live in safe homes so that tragedies such as Grenfell will never happen again.

A tragedy of capitalism

Grenfell was a preventable political tragedy. And it is part of a larger problem — the problem of structural inequality in general. A problem in which profits are put before people. And this problem has a name — it is capitalism. If Grenfell tower had not been “prettified,” it might still be standing today and hundreds of people would not have been victims of corporate manslaughter. The Grenfell Tower housing block fire in London is proof that those in power have no problem with neglecting and destroying poor people’s lives for the sake of their bank accounts. This fire and the countless crises facing working people in the United States, UK, and beyond are proof that the capitalist system is a total failure at meeting the needs of humanity. Under capitalism, corporations will continue to look for ways to profit instead of playing a productive role in serving the people.

This failed system however is not permanent and we can and will fight for a new world. We saw hundreds protesters, angry at the government’s handling of the Grenfell Tower disaster, descend on the offices of Kensington town hall while others blocked the prime minister as she met residents for the first time near the scene of the tragedy days later. We saw demonstrators march through central London chanting: “No justice, no peace.” Corbyn’s near victory — defying ruling class commentators and news outlets who predicted his crushing defeat — is a source of hope for the growing socialist movement around the world.

We will continue to fight for housing, for healthcare, for education, for jobs, for the planet. We must organize and stand together to end the inequalities manufactured by capitalist society so that we can build a society based on meeting people’s needs, a socialist society. And so, I encourage you to join the Party for Socialism and Liberation in the fight for true liberation, in breaking free from these capitalist chains so that the people may truly prosper.