As the phenomenon of homelessness in the United States reaches massive heights, it may be startling to learn that the term “homeless” did not exist in the popular lexicon before the early 1980s.

That is because homelessness—people living in the street, in cars and in shelters—was not nearly as pervasive a feature in U.S. society until the beginning of the 1980s.

Today, the average person can easily believe that mass homelessness “has always been that way.”

In 1983, The New York Times started using the term “homeless persons” instead of “vagrants” as it had done previously. Words like “hobo”—a 1930’s Depression-era term that referred to mostly unemployed men riding the rails for survival—prevailed earlier.

The New York Times’ editorial shift reflected the dramatic change in the economic conditions for millions of people in the United States during the era ushered in by the Reagan administration.

Under the capitalist system of private property, landlords and banks have the undisputed power to evict or foreclose on a tenant or homebuyer who cannot make a rent or mortgage payment. The rights (profits) of private property owners take precedence over the right of people to have a place to live. The possibility of losing one’s home is always present.

The wave of working-class struggles demanding economic relief in the 1930s brought about sweeping social programs, such as Social Security, Unemployment Insurance and General Assistance. The first housing created by the federal government was in 1937 under the Public Works Administration, when 21,000 units were built.

In that same year, the United States Housing Authority was formed under the Wagner-Steagall Act of 1937 to build and administer housing for low-income families as building was accelerated with 50,000 units created in 1939.

World War II brought the construction of 172,000 units, expanding the benefit of government housing for hundreds of thousands of workers and their families.

Then, in 1949, the Housing Act was passed vastly expanding the government’s role in building and administering public housing, and imposing limits on the rents that could be charged. Funds were allocated for more than 800,000 more units.

Soon real estate corporations and builders opposed government housing, arguing that more and more supply of homes would drive demand—and the values of such properties, and therefore profits reaped—down. They successfully forced a change in U.S. government policy, making housing subsidies only for the “very poor.”

Reagan era: a war on workers and the poor

Ronald Reagan’s presidential victory in 1980 signaled a turning point, where longstanding programs supporting low-income workers and the poor were now on the chopping block. The government pursued a sweeping policy of enriching the super-rich, with massive tax breaks and industrial and banking deregulation. Reagan greatly expanded the military buildup that had begun in the last year of the Carter administration.

Of course, it took both Republicans and Democrats in Congress to pass the budget cuts before Reagan signed them into law.

Reagan introduced the deregulation of the Savings and Loans institutions with the signing of the Garn-St. Germain Depository Institutions Act. Before their deregulation, the principal function of savings and loans institutions was to provide home loans to individuals and to prohibit commercial lending. The new act opened the door to speculative financial practices that led to the shuttering of almost 1,600 banks and the loss of $130 billion in consumer deposits. As a precursor to the 2008 bank bailout, the U.S. government “rescued” the savings and loans banks with hundreds of billions of dollars stolen from the population.

One of the most drastic and damaging cuts the government made was in housing. In Reagan’s first budget, funding for public housing and the Section 8 program was slashed in half, down to $17.5 billion in the 1982 fiscal year. In 1983, it plunged further to $8.7 billion.

At the same time, millions of workers lost their jobs as thousands of factories were shut down or downsized their workforces. Hardest hit were Black communities in urban centers.

By the end of Reagan’s first term, the number of homeless people suffering in the streets swelled to a shocking 600,000. That is likely a conservative figure. There were 50,000 to 75,000 homeless people in Los Angeles alone.

Most at risk were social programs called “entitlements” or “means-tested” benefits. Individuals and families who fall below a federal guideline of poverty are eligible to receive different forms of assistance to help them survive.

The assault was accompanied by a new vocabulary, blaming the poor for being poor, and glorifying the “free market.” Terms like “trickle-down” economics and the “deserving needy” (compared to the “undeserving”) were all part of the ideological warfare to demobilize the population with the idea that poverty was the fault of the individual.

In a notorious statement, Reagan said on national TV in 1984, that the homeless were “homeless, you might say, by choice.”

By the end of Reagan’s second term in 1989, subsidized housing programs had been cut by 80.7 percent, after accounting for inflation. Available public housing for seniors was reduced by 47.1 percent, according to progressive economist John Miller.

Accompanying the federal government’s virtual elimination of housing support for the poor were landlords’ rent gouging and gentrification, accelerating evictions and skyrocketing rents in dozens of U.S. cities.

New York City, which had been one of the more affordable cities to live in because of widespread rent control, was transformed by an offensive waged by the landlords and real estate developers to overturn rent control. Poor people were put out onto the street and the city became the image of national homelessness.

Before Reagan, for a family to receive subsidized housing, they had to spend 25 percent of their monthly income on rent. In the first year, the administration raised that requirement to 30 percent. This had a huge impact because an average person paid approximately 25 percent—around one week’s pay—on rent per month.

The problem is not just Reagan

If one were to think these policies—in which the rich get richer and the working class gets poorer—should be attributed only to Reagan, a review of the subsequent administrations would quickly dispel that myth. From Bush Sr. to Clinton to Bush Jr. to Obama, housing for low-income workers and the poor has received continuing cuts.

The housing and homeless crisis is growing ever larger. An analysis by the Center on Budget and Policy Priorities says that 8.5 million very-low-income families in 2011 were experiencing “worst case housing needs,” meaning that they pay more than half of their income on rent and utilities or live in severely substandard housing, meanwhile receiving no housing assistance from the government. That is a 43 percent increase from 2007.

When people hand over such a huge chunk of their income to landlords, little is left for food, heating, health care, clothing, transportation or other essentials. Yet, congressional funding of low-income housing was cut 6 percent from 2010 to 2012.

Government public and subsidized housing does not resolve all social or economic problems for low-income individuals. Racial segregation was the law for decades and is still the reality.

Historically, Black and Latino residents suffer substandard maintenance by the local housing authorities and zero economic opportunities in their neighborhoods. This deliberate neglect created the pretext for the bulldozing of hundreds of thousands of units in the mid-1990s under the Clinton administration with the claim that new, modern and mixed-income housing would replace the projects. But many people were left scattered and vulnerable to worse housing and homelessness.

Ultimately, under capitalism it is the banks, corporations, landlords, real estate companies and their politicians that will always be able to push back important reforms to bolster their bottom line. The real answer is to eliminate both private property and the false idea that capitalism gives everyone the “opportunity” to own a home. 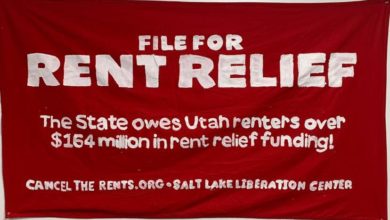