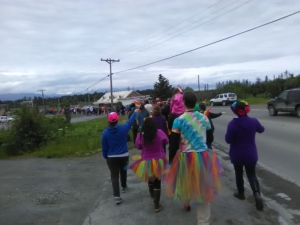 On June 23, a historic LGBTQ pride march was held in Homer, Alaska. Homer, a coastal town of about 5,600 people, has had small LGBTQ contingents in its annual Fourth of July parades for several years, but Saturday marked the city’s first-ever dedicated Pride march. It was organized by activists from Homer in conjunction with Kachemak Bay Family Planning Clinic (KBFPC), a non-profit organization that provides reproductive healthcare and education to the surrounding community regardless of income.

The march came less than two weeks after a pride-related controversy at the Homer City Council. Mayor Bryan Zak had intended to issue a proclamation at the scheduled June 11 council meeting that would declare June to be “Homer Pride Month” and would recognize the importance of the LGBTQ community to the city. However, statewide supporters of an arch-reactionary organization called Alaska Right to Life sent form emails to the city council. Though just a handful of the negative messages actually came from Homer, and the city received many messages from Homer residents indicating their support, three conservative council members informed the city clerk at the last minute that they would not attend the meeting, which was subsequently canceled due to lack of quorum.

Activists called on community members to come out in support anyway, and Mayor Zak read his proclamation to a crowd of about 75 people in front of City Hall. The proclamation was followed by many LGBTQ residents speaking about their experiences.

Despite the reactionary attempt to stir up hatred for Homer’s LGBTQ community, the march was overwhelmingly successful. Liberation News was on the scene as people gathered with flags and signs at WKFL (Wisdom, Knowledge, Faith & Love) Park in downtown Homer.

At noon, the procession made its way down Lake Street, past a line of traffic. The response from community members was wholly positive; people on the streets waved, and drivers honked their horns in support. The march went through a farmers market, where even more people joined in. Finally, the marchers came to Grace Ridge Brewing Co., where they joined a barbecue fundraiser for KBFPC. Catriona Reynolds, the executive director of KBFPC and a leading organizer of the march, had expected a turnout of about twenty or thirty people, but the final crowd was around three hundred. “It was extraordinarily well-attended,” said Reynolds. “It was really fun, [and] we had a lot of positive response.” She felt that the controversy surrounding the proclamation “made this a stronger event today, because people who might not have showed up came because they didn’t want the ugliness to be the portrayal of Homer.”

Organizers and activists are already planning ways to build on the momentum and build a sustainable LGBTQ movement in Homer. The success of Homer’s Pride celebration in the face of a statewide campaign of opposition is a true testament to the power of organization and determination. When we struggle, we can win!