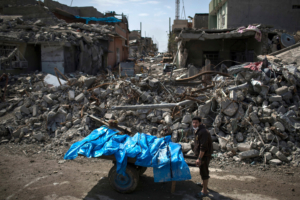 On March 17, massive U.S. air strikes destroyed a crowded apartment building in the Iraqi city of Mosul. The municipality chief of Mosul, Abdul Sattar al-Habbo, supervised the rescue operation said that over 240 bodies have been removed from rubble as of March 29th. The airstrikes were an attempt to kill ISIS fighters who had hidden in the area, essentially making the neighboring civilians human shields. The U.S. occupying force’s response was to destroy the building anyway.

Lieutenant General Steve Townsend, the commander of the U.S. occupying force, indicated that the Pentagon would conduct its own investigation. The U.S. military has offered the following conclusions:

· A U.S. missile “probably had a role” (!) in leveling the crowded building

· The Pentagon is unsure if the civilians were “gathered there by the enemy?”

· “If these innocents were killed by the coalition, it was an unintentional accident of war”

· According to Townsend, “What has not changed is our care, our caution, our applications of the rules of force, how and when we apply our combat power, our tolerance for human, civilian casualties.”

Townsend and the military show an extremely cavalier attitude towards massacre. There can be no other explanation for ludicrous statements like the missile “probably [having] a role” in leveling a building or claims that there was any level of care or caution with regards to civilian casualties.

While the reality is that there is little to no regard for civilian life in U.S. air strikes, there is some truth to Pentagon officials’ claims that the military takes those numbers into account. The procedure for every military action involves a precise evaluation of the number of civilian deaths likely to result from a given military action. According to the LA Times: “The U.S. military predicts how many people will die in its airstrikes by surveilling and estimating the population within a proposed blast radius. It also sets a limit on the number of innocent people each command is authorized to kill incidentally. This limit, called the Non-Combatant Cutoff Value, or NCV, is perhaps our starkest rule of engagement, and it varies region-by-region for political reasons.”

In other words, in the air strikes on March 17 and every other, civilian death is planned and accounted for. It is not that they are accidental deaths, but rather than the U.S. military considers such deaths acceptable.

It is no surprise, then, that the official number of casualties is a gross underestimation at only 140—far fewer than the number quoted from the coordinator of the actual rescue operation. Notably, al-Habbo quoted 240 bodies rescued—in other words, dead people pulled from the wreckage, whereas the word “casualty” generally refers to anyone killed or wounded. in combat. In other words, the actual number of casualties is far over 240.

Unsurprisingly, the corporate media has taken the Pentagon’s version of events at face value, with one New York Times article dated March 28 using information from the Pentagon as its chief source.

The sickening loss of life by innocent bystanders to the conflict has long been a hallmark of U.S. operations in the Middle East and Afghanistan. What makes this case particularly sickening is that Iraqi authorities, in consultation with the U.S. military, instructed civilians not to flee the city as it became a combat zone, according to Amnesty International. This instruction has been confirmed through information gathering actually conducted in Mosul, completely exposing that the United States had no intention of sparing any civilian life.

The March 17 massacre also exposes the naked hypocrisy of those who cry for U.S. intervention in the Syrian Civil War. As the Syrian Arab Army—the army of the Syrian government—liberated Aleppo from organizations with a similar ideological orientation as ISIS, every major news outlet in the United States featured sensational articles attacking alleged airstrikes and bombings on civilian targets. Some even went as far as to speculate that the strikes were meant as retaliatory strikes by a vengeful government against its people. Others claimed that Russia was responsible for the supposed attacks on civilian targets.

While some media outlets have mustered the courage to debunk some of the more egregious allegations, hawks in the government and the military still rely heavily on the “need to protect” civilians as an excuse to invade yet another country. The argument panders to a naïve hope that this conflict could be different, that “we can’t do nothing,” etc., while every intervention the United States has made since World War Two was sold to the public on humanitarian grounds.

From “bringing democracy” to people suffering under “brutal dictators” in Libya, Iraq and Afghanistan to “saving” the people of Vietnam from communists, every U.S. invasion gets presented to the public as a humanitarian act. Libya, meanwhile, is completely devastated and violently torn between warlords. Under George Bush, 1 million Iraqi civilians died thanks to the occupation and many more died due to Bill Clinton’s sanctions on Iraq, which cut off access to food, medicine and water purification equipment. The U.S. occupation in Afghanistan is notorious for incidents like the 2007 civilian massacre where a helicopter crew purposefully fired machine guns at civilians with full knowledge that they were non-combatants.

In truth, there can be no U.S. military or diplomatic action designed to save civilian life. It is a pitiful fantasy to believe that any one case can be an exception; the list of cynical wars to secure resources or power over a given region is long but a self-proclaimed altruism lies at the center of each example. U.S. foreign policy is fundamentally motivated by imperialism—the need to secure ever-cheaper resources at the disposal of
the U.S. elite. This is why there was a war for oil in Iraq, and continues to be an occupying force there—why 240 civilians died in Mosul in a single air strike.