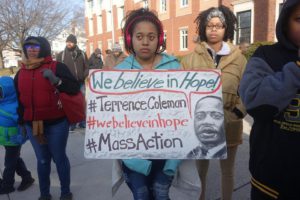 On January 16,  a coalition led by Mass Action Against Police Brutality and other community members, activists, and victims/survivors of police brutality gathered in Codman Commons to remember Dr. Martin Luther King, Jr. by declaring their intent to fight police brutality, poverty wages, mass incarceration, and racist or religious attacks.

The march was pulled off by a coalition of forces uniting under the March for Justice Committee. Organizations came together from all across the city such as: the Fight for $15, 1199 SEIU, Local 8751, rank and file union activists and leaders from New Hampshire, the Nation of Islam, Pleasant Hill Baptist Church, tenant activist groups like the ROXSE Homes Tenants Association, anti-war/anti-imperialist organizations such as Chelsea Uniting Against the War, immigrant rights groups, and student activist groups like Student Activist Coalition (SACO). Members of the Party for Socialism and Liberation were in attendance and helped with the mobilizations before hand and on day of the event.

Central to the action was the struggle against state violence against the working class, particularly Black people. In this spirit, several speakers at the action were survivors of police brutality. Speakers included the family of Usama Rahim, the mother of Terrence Coleman, and police brutality survivor Mary Holmes. All told their stories of being damaged by the loss of a loved one to police violence or surviving a police assault as is the case with Mary Holmes. The common thread throughout their speeches, poems, and conversation was that the struggle will continue until we get justice for everyone victimized by state violence and police impunity.

As Dr. King taught us, “Oppressed people cannot remain oppressed forever.” Various oppressed communities came together to honor King’s legacy with their deeds and active solidarity. In the midst of an incoming Trump presidency, with no signs of police terror slowing down, in the face of even deeper class exploitation than existed when Dr. King was alive, the crowd gathered with a message of hope. This message was symbolic, for Hope is the name of the mother of the slain 30-year-old disabled man, Terrence Coleman. Throughout the initial speak out the people chanted “We Believe in Hope!” several times.

Hope Coleman spoke to the people and told them her story of the murder of her son. She said “He didn’t deserve to be shot. I called for help. I didn’t call for murder.” Late in October 2016, when her son was allegedly going through a mental health crisis, his mother called for an ambulance to give her son the medical attention he needed. Unfortunately, like too many people of color with disabilities in interactions with the police, Terrence Coleman was the victim of police terror and his life was stolen from his family and friends.

Since then, Mass Action Against Police Brutality has been organizing a campaign to “Keep Hope Alive,” declaring that they believe in Hope Coleman over the Boston Police Department who have claimed that Hope was not a witness to her own son’s murder. But, as the case of Mary Holmes and so many other victims and survivors of police brutality show, COPS LIE. In fact, this was a chant of the Mass Action group: “Cops Lie!/Keep Hope Alive!”

The cops lied when they said that Usama Rahim pulled a knife on them when forensic evidence showed that the knife was untouched by him when the gunned him down in Roslindale, Ma. two years ago. The cops lied when they witnessed transit cop Jennifer Amyot Garvey assault Mary Holmes and cleared her and her partner of any charges until Holmes filed a suit against them. The cops have lied in the past and the masses of people have no reason to believe that the police would tell the truth when it does not favor their interests or the wealthy elite and their racist rotten capitalist imperialist system.

Other speakers included Tyrék Lee , Executive Vice President of MA 1199 SEIU. He spoke with power in front of the Dorchester District Court about the struggle against institutional racism, modern day slavery: the system of mass incarceration. He denounced the massive U.S. prison system which imprisons at a higher rate than any country in the world.

It was correct for the action today to denounce the prison system, another edifice of the capitalist imperialist state powers especially in the context of the recent “offer” by the Bristol County, Massachusetts, sheriff to volunteer free prison labor, in conjunction with a national movement of sheriffs he is organizing, to build Trump’s wall at the U.S. Mexico border.

On this day, Martin Luther King Day, the ruling class puts forward a sanitized image of Dr. King that fits into their national illusion (delusion) of progress. What this does and really what its purpose is, is to defang King and de-mobilize the masses politically and otherwise. The crowd of roughly 300 people that gathered today, came together with a clear message. Their statement reads:

We believe in Hope Coleman. Through countless cases we have all borne witness to across the country, we have come to one conclusion – the police lie. The culture of cover-ups and the blue wall of silence must be exposed and dismantled. Commissioner Evans is the number one offender, pushing to the media the officers’ lie that Terrence Coleman was attacking them, coming at them with the knife.

All Hope Coleman wanted that evening was help for her son, who had been living with schizophrenia for a number of years. So she called mental health staff and later 911 for an ambulance. Instead, the police responded and rather than help Terrence and his mother, the Boston Police killed him.

The Coleman family needs widespread community support to put maximum public and political pressure on the government to enforce the law when it comes to the crimes of the police. Suffolk County District Attorney Dan Conley has the dubious record of never prosecuting a single police officer that has taken the life of a civilian.

We call on all organizations, elected officials and defenders of democratic rights to join us in these demands:

-Arrest & charge the Boston Police officers Garett Boyle & Kevin Finn who killed Terrence Coleman
-Commissioner Evans must resign and face charges for the cover-up of the police’s actions!
-Release any available video related to the police killing of Terrence Coleman!
-No to any police harassment of witnesses!
-Immediate financial compensation to the Coleman family for funeral expenses and for the wrongful death of Terrence Coleman! 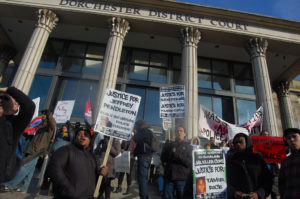 As of today 41 people have been killed by the police. Last year at least 1,152 were killed by the police, all the while less than 1 percent of police ever get indicted for these murders. The system of capitalism has no answer for the injustice the masses face from the police to the prisons to the court house. The police are not in society to primarily protect the poor and working class, especially those of oppressed nationalities like African Americans, Mexicans, and Puerto Ricans.

Through connecting our oppressions and building active solidarity in the streets, politically, and organizationally, the masses of working people and those oppressed by white supremacy and imperialism, can build the forms of resistance needed to win freedom, justice, and liberation. It is this coalescence of forces that will be necessary in the coming years of the incoming Trump regime and the re-ascendant white supremacist, nativist, and settler colonialist forces of reaction.

Dr. King was a man of transformation throughout his life and he saw the vital need to see each other with new eyes and make solidarity more than just a noun, but a verb. As he once eloquently put it:

“Our children and our families are maimed a little every day of our lives. If we can end an incessant torture by a single climactic confrontation, the risks are acceptable. Moreover, our family life will be born anew if we fight together. Other families may be fortunate enough to be able to protect their young from danger. Our families, as we have seen, are different. Oppression has again and again divided and splintered them. We are a people torn apart from era to era. It is logical, moral, and psychologically constructive for us to resist oppression united as families. Out of this unity, out of the bond of fighting together, forges will come. The inner strength and integrity will make us whole again.”