On September 17th, four PSL members and anti-racist organizers in Denver who led the mass anti-racist movement were arrested violently by police. The movement for Black lives is a righteous struggle for justice, and those arrested are key leaders at the forefront of the movement in Denver.

Just as your fingers cannot cover the sun, lies cannot overcome the truth. There’s no end to the name of the Black people who were imprisoned or killed by the police’s murderous suppression. As long as police terror and white supremacy continues, the anti-racist movement will continue to spread.

The Trump administration is pushing the struggle even further. The fever of the anti-imperialist struggle is growing all over the world. The people’s movement to prevent the 2nd and 3rd killing of George Floyd is spreading like wildfire throughout the U.S. and the globe.

Dave Young, the District Attorney responsible for this attack on the movement–and a member of the Democratic Party–must immediately drop the false and trumped-up charges against the Denver anti-racist organizers and PSL members and stop the assault on the movement and on free speech!

Whereever oppression and exploitation exist, there is resistance and struggle. The American people are outraged over continue to take to the streets and to organize. The People’s Democracy Party (PDP) of South Corea fully supports the arrested PSL members and expresses strong solidarity. 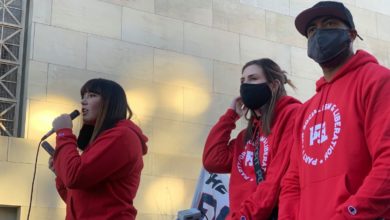