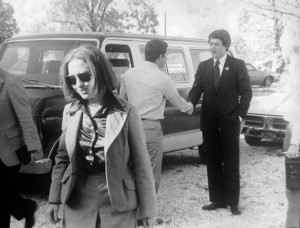 “Over and over again I was asked, ‘What are you going to do about all the incompetent teachers?'” Mrs. Clinton told the Arkansas Democrat-Gazette in 1984.

From the Sun-Journal, March 12, 1997: In 1983, angry teachers stared contemptuously at Arkansas’ first lady as she walked through a packed schoolroom for a speech. Harsh whispers turned to grumbling. Then hissing. “It’s all right,” Hillary Clinton assured a friend, a fellow Arkansan who was shocked by the reception. “Someday they’ll understand.”

We should not be surprised by the arrogance or the fact that Hillary Clinton got in on the ground floor on the war on public education and the vicious attacks on teachers a full decade before the big corporate push to reform public education into the grave began in the early 1990s.

After all, she is guilty of a serious amount of destruction. She is largely responsible for the destruction of Libya. She voted for Iraq to be destroyed. She helped destroy the Black community by promoting mass incarceration and the destruction of welfare. And that’s just the tip of the iceberg.

In 1983, the then governor of Arkansas, Bill Clinton, appointed Hillary to head a task force on education. She teamed up with Sam Walton, founder of Walmart, and other elites in Arkansas to get an education bill passed that instituted a punitive regime of standardized testing for students and skills tests for teachers. This was, if not the first, one of the first salvos in the reactionary war on public education. In fact, she may have helped to inspire the ruling class to make their push to outright own our education system.

Clinton has for three decades consistently fought for the kinds of right-wing corporate education reforms that have the country’s schools and millions of children teetering on the edge of the abyss. In 1989 she reflected on her 1983 education bill saying, “For all the pain and agony and terrible feelings it engendered, I’d do it again.”

In fact, the Clintons started their long-term relationship with billionaire education privatizer Eli Broad in, that’s right, 1983. Coincidence? They are also close to education destroyer Bill Gates. This is heavy stuff. These people want to create a market-controlled, hierarchy-based, apartheid school system that drives millions of youth into the dirt through unscientific test and competition based instructional methods.

Here’s the even sicker part of Hillary’s role in destroying public education. Data shows that “skills tests” like the ones she created in Arkansas, using thinly-veiled racist language, have helped drive large numbers of Black teachers out of the profession. In other words, the tests are racist. This is an important revelation: Hillary Clinton began her career with a racist political “reform.”

Hillary Clinton certainly comes off as a progressive in comparison to vile racists like Donald Trump and Ted Cruz. But the fact remains that no one running for president has anywhere near Hillary’s actual track record of thoroughly reactionary policy making and destroying millions upon millions of people’s lives. It is time for a different path for our children and everybody else–a country and a world where education is about equality and justice and not about the narrow plans of profit-hungry billionaires.