On September 29, our beloved comrade Andrew Thomas Freeman died unexpectedly of a cardiac event. A founding member of Party for Socialism and Liberation, he was a lifelong activist against war and staunch opponent of racism and all forms of bigotry.

Andy was born in San Francisco in 1953, the second of eight children in a working class family. When Andy was a child, his father, Ed Freeman, a Teamster delivery truck driver and  Korean War military resister/active duty conscientious objector, took Andy to anti-nuclear and anti-war protests.

A voracious reader with an interest in history, Andy had to get parental permission to borrow from the public library the book “Seven Pillars of Wisdom” which had inspired the popular film “Lawrence of Arabia.”  From this, he sought out as much knowledge as he could about the liberation struggle of the Palestinian people with whom he felt deep solidarity, even at a time when supporting that struggle was very unpopular in this country. His interest in Palestine and Middle East solidarity also led him to study Arabic, first as a teen then many years later as an adult. As a kid he sold candy door to door to buy a set of textbooks with accompanying language LPs. Years later in Seattle, he was office mates with Farhat Ziadeh, the author of that textbook and the voice on the LP.

Like many of his generation, Andy struggled to find his way personally. This led him, a staunch opponent of the U.S. war on Vietnam, to enlist in the U.S. Air Force, where he served in Guam, New Mexico and Arizona. Joining the military was something he instantly realized was a huge mistake. During his time in the military, he connected most closely with Black and Native airmen, who took him under their wing, teaching the “barefoot hippy kid” how to spitshine his shoes and bringing him to powwows. In Guam he visited villages during their festivals, becoming friends with local people, and started to learn Chamorro. Also while on Guam, he attended a protest against the racist treatment of Vietnamese refugees at the end of the Vietnam War, who were being held in concentration camp-like conditions on the island.

After the end of his military hitch, Andy returned to the Bay Area where he worked a variety of jobs including assembling grocery store shelves at Hussman’s. He continued to struggle personally until committing to being clean and sober on Jan. 26, 1981. He humbly provided service to many groups and individuals in the recovery community and treasured his sobriety. He was able to complete his degree in Computer Science at San Francisco State University in 1987 and began working as a tester and firmware engineer. Working in the tech field, he knew that despite his good pay he was still a worker being exploited by the boss and he never gave up on his belief in the value of collective action and workplace organizing.

Becoming a fighter for socialism

Andy became a socialist revolutionary after meeting his best friend and future spouse, Jane Cutter, who was a member of a socialist organization. He saw the connection between all the issues he cared about, from Palestine to racism to AIDS and LGBTQ rights and how they were all rooted in capitalism and imperialism. He wanted to be part of fighting for a socialist future for humanity. Jane and Andy met in 1986 and became more than friends in 1988, marrying in 1989. Their daughter Rachel Cutter Freeman was born in 1991.

In the mid-1990s, the family moved to Ann Arbor, Michigan where Andy started graduate school in Near Eastern Studies (Arabic Linguistics) .

In graduate school, Andy continued to be active. He arrived in the Detroit area during a newspaper workers’ strike and he, Jane and another grad student formed a sort of co-op to video tape the picketlines. The footage was edited by the late Key Martin into a short documentary that Andy then reproduced in his basement and mailed out by the dozens to union locals and strike supporters all over the United States.

He became a shop steward in the Graduate Employees Organization at the University of Michigan, representing his department of Near Eastern Studies. He galvanized and organized the local movement opposing threatened military action on Iraq by the Clinton Administration, and successfully agitated for the movement to go beyond opposing bombing to becoming a movement to end the genocidal U.S. sanctions. In 1999 he participated in the Iraq Sanctions Challenge spearheaded by Ramsey Clark. There, Andy used his knowledge of Arabic to communicate directly with the everyday Iraqi people that the delegation came in contact with, deepening his sense of connection to their suffering and their struggle for self-determination.

Andy and his family spent most of 2001 in Yemen while he conducted his dissertation research on language change (or the lack thereof) in Sana’a. He made many friends among Yemenis of all walks of life. In the aftermath of the Sept. 11 terrorist attacks in the United States, he was amazed by the many spontaneous acts of solidarity from people on the street.

In 2002 he moved with Jane and Rachel to the Seattle area, settling in Shoreline, a small city just north of Seattle, jumping into the anti-war movement as it unfolded in the build up to the second U.S. genocidal war on Iraq. In 2004, he participated in the founding of the Party for Socialism and Liberation, and continued his work to build the Party in Seattle and Washington state, engaging in many different mass struggles.

One story is especially worth sharing. In 2011, ANSWER Seattle planned a 10-year anniversary march to mark the start of the Afghanistan War. At the end of the anti-war rally, a large, belligerent man approached Andy and Jane as they were packing up materials. The man was an active duty GI who had served in Iraq. He started arguing and saying that the United States was in Iraq to defend democracy and help the Iraqi people. Andy went face to face with him, matching energy, said he too was a veteran, that he had been in Iraq and had talked with Iraqis about what they thought and what they wanted from the United States. The man calmed down a bit, even offered to help carry things to the car. Jane and Andy politely declined and went home, pretty much forgetting about the incident.

That is, until the following summer when a member of the veterans and active duty group March Forward reached out to them and asked them to host an AWOL anti-war GI from Fort Lewis. The AWOL soldier was delivered to their house the next day from Olympia. As he started chatting with Andy, he cried out “I remember your voice!” and recalled their interaction at the rally downtown ten months prior.

A life dedicated to people and the struggle

Andy served two terms on the Seattle branch’s Steering Committee after a period of rapid growth in Seattle following Trump’s election victory in 2016. He managed tech, logistics and printing for the branch, and spearheaded postering for public events. Starting in January of 2021, he participated the last Sunday of every month in a demonstration to end the U.S. blockade of Cuba, being asked several times to be the lead driver of a car protest. He also represented the PSL in the local Cancel the Rent Housing Coalition and played a key role in organizing the Seattle event for the National Days of Action to Stop All Evictions on September 25. In addition, he provided key support to Washington state comrades in at-large and pre-branch areas, driving with Jane to Tri-Cities, Spokane, Sequim, Bellingham, Mt. Vernon and Tacoma in 2020 and 2021.

Andy was a lifelong learner. Having earned a doctorate in Arabic Linguistics and Linguistics at the University of Michigan, he went on to complete the merger of his research interests by earning a second Masters in Computational Linguistics from the University of Washington. He worked for a number of companies doing various kinds of natural language processing. He retired from Amazon’s Alexa team in the summer of 2021 but couldn’t resist the opportunity to work at the Kaiser Permanente Health Research Institute, where he was part of a project studying medical records in order to improve care and outcomes, something he felt very passionate about. Though he only worked there for a short while, his loss is felt deeply.

Andy was also an athlete. He took up running in a serious way, running his first marathon in 2013. He went on to run 25 marathons, more than 50 half marathons and numerous runs of other distances. As he posted his results on Facebook he would write: “A slow run is better than no run.” In addition, he loved to play Disc Golf and organized the Seattle Substance Free Disc Golf MeetUp group which met regularly for at least 10 years. He also completed the Seattle-to-Portland cycling event three times — he was a one day finisher one year. The last time he went on the STP was with his youngest brother, Joe, in 2019.

Andy exemplified the “four primary characteristics of the comrade” as outlined by Jodi Dean:  “discipline, joy, enthusiasm, courage.”  As a Party member, Andy was willing to take on any task however mundane or complex, marshalling discipline, courage and enthusiasm. Petitioning was never one of his favorite tasks yet he did it every time the Party sought ballot access in Washington state, in 2008, 2012, 2016 and 2020. He noted that in 2020, despite pandemic conditions, petitioning was much easier than it had been previously because so many people were interested in socialism. Joy should have been Andy’s middle name, as so many people have noted his joyful demeanor at protests as he chanted and marched with his big voice that did not need a bullhorn to be heard and his marching steps that made it look as if he were dancing.

Andy always tried to always follow the tradition of “principles before personalities,” and strove each day to be true to himself and of service to others. He believed a revolutionary must work every day to build the party and advance the struggle. He used to say, “True Marxist-Leninists have paste on their shoes” — this being back in the days when activists still put up posters using wallpaper paste.

Andy’s personal mantra was “Don’t freak out, don’t give up, be nice to the people you’re with.” He had a big heart for the struggles of prisoners and homeless people, being himself no stranger to couch surfing, vehicular residence and the county jail.

His sudden death leaves a hole in our Party and the community as evidenced by the outpouring of sorrow and solidarity; he may have never truly appreciated the extent of his impact. May his dedication and self-sacrifice be an inspiration to the next generation of revolutionaries. Working in unity with other comrades, he helped plant many seeds that our class may reap the harvest of victory over the inhumane system of capitalism.

Read an interview with Andy and his comrade Jane published shortly before Andy’s passing. 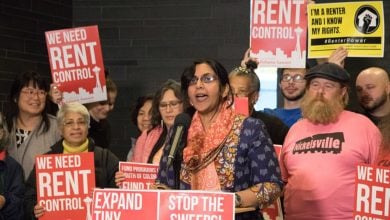