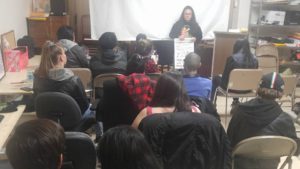 On a crisp December night, almost two-dozen members of the community gathered in the Albuquerque office of the Party for Socialism and Liberation to attend the first of a monthly series of lectures organized by Power Through Peace, a young activist organization led entirely by Native American women. Jubilant with the news that the Obama administration had halted construction on the Dakota Access Pipeline by declining to grant an easement to Energy Transfer Partners, the main stakeholder in the project, community members of all backgrounds filtered into the office to enjoy homemade frito pie and learn about the evening’s topic, fracking.

Kenia Alonso (Diné/Zuni), a young activist and reporter for local radio program Generation Justice began the evening with a discussion of the alarming rise in surveillance strategies employed by local, state and federal authorities against activists. While acknowledging that social media is an invaluable tool for activists, Alonso urged attendees to conduct as much of their organizing work as possible in private, as social media is increasingly monitored by the state.

Alonso also mentioned the alarming use of surveillance technologies like the “Sting-Ray” device, capable of monitoring users’ cell phone usage without their knowledge. When asked if such surveillance is legal, Alonso replied simply, “The level of surveillance we are under shouldn’t be.”

Next to speak was Paige Murphy (Diné), an organizer with the Albuquerque chapter of the Party for Socialism and Liberation. While Murphy celebrated the halt in construction of the Dakota Access Pipeline, she stressed the need for activists to remain vigilant against further attacks on Native sovereignty and treaty rights, noting that advisors close to President-elect Trump have openly called for the privatization of reservation lands, a proposal which would only accelerate the rate of resource extraction and environmental degradation on Native lands.

Murphy went on to stress that only the power of the organized working class can secure and defend victories like those seen at Standing Rock, and called for the seizure of the assets of all extractive industries and their eviction from Native lands, stating “Movements from all around the world are standing in solidarity with #NoDAPL. We see thousands of people taking a stand against injustice. We see it with the Black Lives Matter movement. We see it with the Palestinian movement fighting against settler colonial occupation. We even saw it with the people who supported Bernie Sanders. And we saw it with the people taking the streets against President-elect Trump. What socialism really teaches us is that these struggles aren’t isolated, and that these struggles point to a common enemy, which is capitalism.”

Murphy concluded her remarks by stressing the need for revolution to combat the crises of climate change and mass inequality, warning the audience: “It is a mistake to align ourselves with the Democratic Party. We need to form our own independent movement separate from the two party system. We need a revolution, and we need a socialist planned economy to solve the [environmental] crisis. [A system] where all the resources and scientific knowledge can be consolidated to solve the greatest challenge we’ve had to face. Environmental catastrophe.”

PJ Blackbird (Pueblo/Oglala) closed the evening with an inspired speech on the dangers of fracking. Noting that 2016 was the hottest year on record, Blackbird stressed the need for policymakers to end the use of fossil fuels, the use of which contribute greatly to climate change, a fact which many policymakers in the United States ignore or deny outright. Blackbird also explained that the process of extracting natural gas through fracking jeopardizes both water resources and sites of historic and spiritual significance to Native communities in the Southwest. In New Mexico, for instance, oil and gas industries continue to drill closer and closer to Chaco Canyon in the northwest part of the state, home to thousands of Ancestral Pueblo sites of immense spiritual significance to Native communities of the region. Blackbird, the president of Power Through Peace, concluded her remarks with a call to action, imploring the audience to advocate for radical change, and for the destructive use of fossil fuels to end.

The world is warming and big oil predicted it