To fulfill the resource requirements for this project, the energy upgrade will cost upwards of $300 million and include overhead poles with an average span of 244 meters. Structural towers needed to support the line as it crosses the Rio Grande from White Rock Canyon must be constructed and will require large-scale installations across National Forest land. Los Alamos officials claim they will minimize the desecration of Caja del Rio land by connecting to pre-existing transmission lines.

Pueblo leaders in New Mexico say that there has been no consideration of the sovereignty of Indigenous peoples during the pursuit of the project. Los Alamos has faced criticism for decades for its environmental abuses, its role in nuclear proliferation, and its ignoring of Native New Mexican peoples. The laboratory was the site of the creation of the nuclear bombs that were dropped on Hiroshima and Nagasaki in 1945, resulting in hundreds of thousands of deaths of civilians, as well as another warhead that was detonated near Alamogordo, N.M.

To date, no environmental studies have been conducted for the Los Alamos upgrade project, and no Pueblo ceremonial kivas, petroglyphs, and prayer sites have been considered. This unnecessary, wasteful project is designed to build a larger power grid for the laboratory’s nuclear projects — sacrificing the sanctity of essential cultural resources attached to tribal communities.

Los Alamos refuses to deal with the real problems

Mello described how the Los Alamos National Laboratory power grid is already misusing and wasting energy: “The lab as a whole is very energy inefficient. They don’t meet any of the modern DOE [Department of Energy] guidelines on how to be more energy efficient; they simply don’t care. The lab published a shocking self-assessment on its own sustainability, and openly admitted to their energy needs not being met due to inefficient standards.”

Within the for-profit world of the United States military-industrial complex, it would thus be much cheaper to build an entirely new transmission line through national forest land rather than upgrade their existing energy grid to be more sustainable and energy-efficient. Their promise to produce an environmental assessment on the project serves only to mask the true wasteful nature of the project and to distract from their growing energy needs from nuclear military projects that cannot be sustained by their outdated energy grid.

“With every transmission line [Los Alamos] creates to increase their energy capacity, another resource is being diverted from our communities.”

Since its inception in 1942, the laboratory has struggled for control over local resources connected to tribal communities. In a Liberation News interview with former San Ildefonso Pueblo Governor and Pueblo traditional leader Gilbert J. Sanchez, Sanchez stated that his family, his community, and his tribe have seen their resources slowly co-opted by the lab for decades. “Our irrigation networks depend on water being diverted to the lab. We have watched our resources dwindle over the years because of their nuclear projects, and the lab’s needs only grow. With every transmission line they create to increase their energy capacity, another resource is being diverted from our communities.”

The project serves only to exploit tribal and community resources for nuclear expansion which constitutes one new chapter in a long history of nuclear exploitation. In the same interview with Sanchez, he expressed concern over the lack of Pueblo consent and the lack of power he and his fellow Pueblo leaders feel they have over the issue: “It’s disheartening because they don’t care about our consent. They build and desecrate our land with projects that have no perceivable positive impact on our communities and expect us to roll over and accept it. We don’t give our consent, and the Council of Governors is doing their best to oppose the project. Sadly, there’s only so much we can do on that front.”

The All Pueblo Council of Governors is a group of 20 leaders of sovereign pueblo nations in New Mexico and Texas. They criticize the power upgrade project as another addition to a long list of unnecessary projects that siphon local and tribal resources from communities with real and historic connections to the land.

‘The act is nothing short of violence‘

The construction of the transmission line through Caja del Rio will disrupt the sanctity of essential cultural practices for the Tewa peoples and for Pueblos across New Mexico. For millennia, Tewa peoples have conducted traditional practices within the canyon, including prayer walks and kiva ceremonies. The land itself serves as a sacred place for the spiritual acknowledgment of Tewa ancestors, making it a perfect place to perform essential ceremonies. Moreover, an incredibly high number of culturally-significant petroglyphs color the landscape as an essential site for the preservation of sacred landmarks.

The All Pueblo Council of Governors Chairman Mark Mitchell stated in a press release: “The recent desecration of petroglyphs in the Caja del Rio weighs heavy on the hearts of all Pueblo people throughout New Mexico and Texas. The act is nothing short of violence against our ongoing cultural connection and our spirits who reside on the landscape.” This act of cultural violence against Indigenous land serves as a reminder of the colonial nature of the United States government’s imperialist military enterprise, which seeks to build weapons of mass destruction worth trillions of dollars rather than diverting those resources to acknowledge the land rights of sovereign Indigenous nations and provide resource aid to communities who have been devastated by centuries of colonial violence.

Los Alamos National Laboratory has made its position as a tool for colonial oppression and nuclear expansion clear in crossing Caja del Rio and disrupting the ceremonial sites of the Tewa people, as well as diverting essential resources such as water, electricity, and land from local tribal communities, such as the Pueblo of San Ildefonso, Pueblo of Pojoaque, the Pueblo of Nambé, and many more.

The struggle to stop the transmission line from crossing Caja del Rio and Tewa land will continue in earnest and requires the resistance of working-class peoples across New Mexico, Indigenous communities dedicated to protecting their land, and any and all allies in solidarity against the United States military complex. 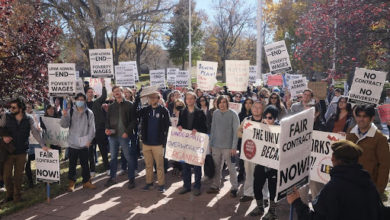