Bernie Sanders won the Iowa primary popular vote. After a four-day delay in reporting,  and with 97 percent of the results in, it could not be denied that Bernie Sanders got 6,000 more votes than anyone else. But it appears that the delegate count from Iowa caucuses is a dead heat between Sanders and Pete Buttigieg.

New outlets everywhere, however, reported only the caucuses numbers, leaving out the popular vote victory for Sanders. The Associated Pres, for example,  declared that it was “unable” to declare a winner.

Polling averages had suggested that Sanders was going to win big in Iowa.  One thing is for certain:  The DNC was going to do all it could not to allow headlines to read “Big Victory for Bernie.” When returns showed Sanders in the lead,  Tom Perez, the DNC chairperson, disputed the results, describing “inconsistencies” and calling for a “recanvass” of votes.

Regarding the vote count delay, questions are being raised about Shadow Inc., the application responsible for obscuring and delaying the primary results. It is linked to leaders of Hillary Clinton’s 2016 campaign, and has very close ties to the DNC, and to billionaires like the Silicon Valley reactionary Reid Hoffman.  Senior members of Shadow’s team, include the CEO, Gerard Niemira, COO James Hickey, CTO Krista Davis and Product Manager Ahna Rao, all of whom helped run Hillary Clinton’s 2016 primary campaign.

In addition, Peter Buttigieg, whose campaign has previously contracted the firm behind the app, claimed a win Monday night with no data to be had. How could that be?

There may no direct evidence yet of a fixed caucus, people have every reason to be deeply suspicious given the crusade the DNC is waging against the Sanders insurgency against the Democratic party establishment.

In 2016 the extent of the Democratic party’s sabotage of the Sanders’ campaign in favor of Hillary Clinton didn’t surface until the actual Democratic Convention itself. At the time it was dismissed by Sanders as a “family squabble” as he prepared to endorse Hillary Clinton, much to the dismay of his working class delegates, who had placed their hopes for change in Sanders, and who had saved and sacrificed so much to pay for travel and lodging in Philadelphia, where hotel prices were jacked up for the convention.

Today, as the Sanders’ movement has grown in determination and popularity, the attacks from every corner of the capitalist establishment have grown into a full-scale, open war against him. The DNC has shown that they fear Sanders and the  movement that supports him even more than they fear Donald Trump.

Bernie Sanders has consistently promoted progressive legislation, but not really rocking the boat of the capitalist establishment. The Democratic Party and the mainstream media have mostly ignored him throughout his long career in elected office. What has changed?

His campaign for president has re-enlivened a strong, working class electoral movement looking for major social change. It is this movement that the entire capitalist class is afraid will develop beyond election politics. They know that if Sanders is elected the working class will expect results – which can only be achieved by a militant, working class movement in the streets. Sanders himself has explained this.

Even before the first primary caucus, the Democratic National Committee was plotting rules changes to try to head off Sanders getting the nomination.  For example, one plan reportedly under consideration is to allow super delegates to vote in the first ballot at the convention. These are all politicians, party officials and big donors who represent no one but themselves. Unlike other delegates who come to represent the vote from a caucus, they can vote as they wish.  They number over 700 and voted overwhelmingly for Clinton in 2016.  Excluding them from the first ballot was a reform won by the  Sanders’ movement at the time.

In another effort to undermine Sanders, the DNC changed its own rules of a minimum donor requirement to allow Michael Bloomberg to enter the Feb. 19 debate.

Bloomberg, whose net worth is over $60 billion, used to be a Republican, is fully financing his own campaign, and made a little (for him) $300,000 donation to the DNC before the ruling.  Just last month it was revealed that he contracted prison labor to make phone calls for his presidential campaign. Yet this billionaire is much favored over Sanders by the Democratic Party establishment.

The attacks have come from many sides. “No one likes him” said Hilary Clinton, referring only to the corrupt lobbyists and politicians in Washington, ignoring the enthusiastic Sanders supporters who come by the tens of thousands to his rallies, far more than any other candidate.

Some weeks later Hillary Clinton weighted in again against Sanders: “It’s not only him, it’s the culture around him,” Clinton told The Hollywood Reporter. “It’s his leadership team. It’s his prominent supporters. It’s his online Bernie Bros and their relentless attacks on lots of his competitors, particularly the women…”

The Big Lie of the “Bernie Bros” has been revived from 2016, that somehow women-hating, racist, arrogant college-educated white men are the core supporters of Bernie.

“It’s really frustrating to see that the idea of the ‘Bernie Bro’ is still so pervasive,” said 24-year-old Megan Magray, a reproductive health advocate and Sanders campaign organizer. “It’s insulting to see women, women of color, and people of color being erased from his campaign because they’re really integral to it.  . . . recent polls from November of 2018 to March 2019 shows Sanders is more popular with people of color than white people, and women like Sanders as much as men do, if not more.”

Meanwhile, former Secretary of State John Kerry, from his seat on the Board of the Bank of America, supports Joe Biden and has threatened to run to stop Sanders. Kerry said that “donors like venture capitalist Doug Hickey would have to raise ‘a couple of million’ now that such donors ‘have the reality of Bernie,’ according to the Wall St. Journal.

The press that calls itself “liberal” has sunk to the point of equating Bernie Sanders with Donald Trump. Dana Milbank of the Washington Post announced that Sanders is the “Donald Trump of the left” with a “flair for demogoguery” and “the angry, unbending politics of Trumpism.” Jennifer Rubin of the same newspaper declared that Sanders was “playing Trumpian politics.”

The Boston Herald declared (Aug. 18) that it was “Time for Bernie to bow out” due to the “parallels between Trump and Sanders.” More recently, a New York Times editorial (Jan. 19) rejected Sanders because “We see little advantage to exchanging one over-promising, divisive figure in Washington for another.”

These writers are not stupid. They reflect the growing desperation of the establishment to say and do anything that possibly can discredit Sanders. They now seem to love Pete Buttigieg, leaving out that, according to Forbes Magazine:

“Forty billionaires and their spouses have donated to Pete Buttigieg’s presidential campaign, according to an analysis of federal election filings, making the South Bend, Indiana mayor a favorite among America’s richest people… Forbes found that Buttigieg got donations from 13 big-money donors who gave exclusively to him—by far the most of any Democrat running for president. Two of those donors have connections to Donald Trump.”

The attacks on Bernie Sanders and his movement will  get ever nastier as the movement gains strength. The super-rich are frustrated because the more they attack Sanders, the more popular he gets. Their challenge is how to sabotage the Sanders’ campaign without completely discrediting capitalist elections and further radicalizing his movement. Such is their fear of provoking a strong working class movement, the real lever of social change. 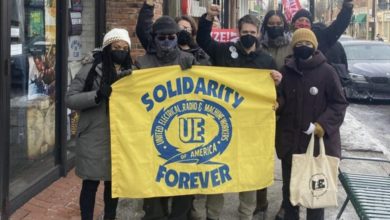 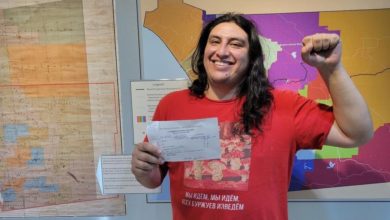