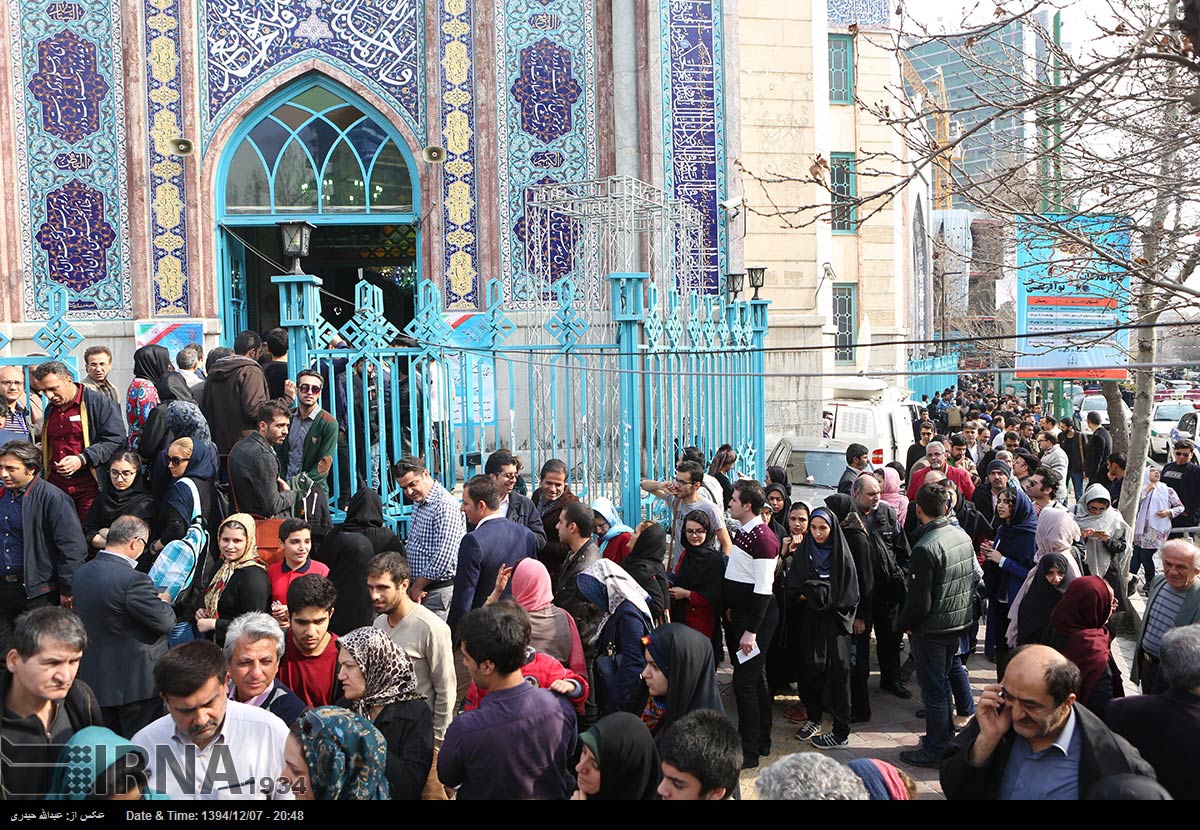 On May 20, President Hassan Rouhani was re-elected to a second four year term in the presidential elections in Iran. According to the constitution, the elections would have gone to a second round had none of the four candidates received more than 50 percent of the vote. But Rouhani received 40 million votes, more than 57 percent, decisively winning the election in the first round.

Iran holds presidential elections every four years. In the lead up to each election, pro-West opposition forces abroad widely propagate the idea that voter turnout will be low and that people have recognized that the elections are rigged and do not matter. For the 2017 elections, as usual, Prince Reza Pahlavi, the son of the deposed Shah of Iran, encouraged people to stay away from the polls and engage in civil disobedience instead. The MEK, an opposition force that acts as a spy agency for the CIA and counts the likes of Senator John McCain and Rudy Giuliani as its staunch supporters, also called for a boycott of the elections.

Western media outlets widely cover these calls for election boycott and uncritically parrot predictions of a low turnout. Then, when the elections take place, invariably with a high turnout, Western media label the turnout as “surprisingly high,” the surprise being the product of their own pre-election propaganda.

Not that surprisingly, the turnout was impressively high for this year’s elections. On what turned out to be quite a hot day in most provinces, at some polling stations people waited in line for hours. Over 70 percent of eligible voters voted, with turnout over 80 percent in some provinces. Voting time was extended by five hours, until midnight, in response to what election officials called the “enthusiastic participation of people.”

Since the election of Trump, U.S. media outlets have been giving themselves self-congratulatory pats on the back for how independent they are. Given that Trump, despite being an actual member of the capitalist ruling class, does not fit the mold of a typical ruling-class politician, most corporate media outlets do not cover Trump favorably.

But this independence from the White House does not survive a U.S. bombing campaign, as in the case of the Trump bombing of Syria in March, after which much of the media started praising him for acting “presidential.” And more broadly, opposition to Trump does not signify independence from the imperialist goals of the U.S. ruling class. The contrast in how the “free and independent” media covered Iran and Saudi Arabia in a week when they were both in the news, is a good case in point.

In the weeks leading to the elections in Iran, the corporate media did not miss an opportunity to detail all the shortcomings of Iran’s electoral system: why the elections were rigged; why the elections did not really matter; how the mullahs ruled with an iron fist; and how the 2009 elections were likely stolen. Eight years after the 2009 elections, without a shred of evidence having surfaced of any irregularities, leave alone fraud in the order of millions of votes, Western media still question the legitimacy of Ahmadinejad’s re-election.

On the day after Iran held elections, President Trump visited Iran’s regional rival, arch reactionary Saudi Arabia. One might expect the media to give some attention to the fact that Trump’s first foreign visit was to one of the most repressive, reactionary states in the world, followed by a visit to Israel, an Apartheid state.

There was scarcely a mention in the media coverage that Saudi Arabia routinely arrests, tortures and executes dissenters; that Saudi Arabia chops off people’s arms and heads for petty crimes; that Saudi Arabia represses women so heavily that women do not even have the legal right to drive automobiles; that Saudi Arabia has for two years been engaged in a deadly bombing campaign of neighboring Yemen, murdering thousands of civilians, bombing wedding ceremonies and other public gatherings. Instead, we were treated mainly to coverage of what Trump was likely to eat as a guest of honor in the royal dinner reception and whether or not Melania or Ivanka Trump would wear a veil to that dinner.

Indirectly referring to Saudi Arabia and other U.S. client states in the region, Iran’s Foreign Minister Mohammad-Javad Zarif said: “In most countries in our region election is a dream … You are talking about a region where people don’t have a constitution for god’s sake.”

What was at stake in the elections?

Rouhani’s chief rival was Ebrahim Raisi, who received 38 percent of the vote. Rouhani represents the political line of negotiations and compromise with the West. Raisi and others campaigned against the Joint Comprehensive Plan of Action, a 2015 agreement that finally ended the sanctions against Iran. While using this as a campaign strategy, it is unclear whether Raisi would actually have taken Iran out of the JCPOA had he been elected. Nor would this even be possible without the approval of the supreme leader Khamenei.

Rouhani’s re-election, in reality, represents stability and a continuation of the current government policies. Portraying Rouhani’s victory as a kind of “delayed victory” for the 2009 “Green Revolution” is a completely inaccurate characterization. It is true that well-to-do Iranians, in particular in affluent northern Tehran, voted strongly for Rouhani. But in contrast to the 2009 campaign of Moussavi, which focused almost exclusively on the educated and well-off, and mainly got the votes of the same sectors of the population, Rouhani’s vote totals clearly show that he received votes from a wide cross section of Iranian society, in Tehran, other big cities and the provinces.

Rouhani represents a grouping within the Islamic Republic that believes in reducing conflicts with the West through negotiations and agreements. Rouhani does not represent a capitulation to the West or turning Iran into a U.S. client state. The JCPOA represents not just concessions made by Iran but also concessions made by the U.S., including establishing the right of Iran to develop nuclear technology. Under the four year term of Rouhani, Iran’s foreign policy, notably towards Syria and Yemen, represents not a capitulation to the U.S. but a continuation of long-held anti-imperialist foreign policy initiatives.

Western media highlight the existence of a vetting system to determine the qualification of Iranian candidates for office as evidence that Iran’s elections do not really matter. It is true that the Guardian Council has to certify each candidate running for office. In fact, former president, Mahmoud Ahmadinejad attempted to run again but was disqualified. Ahmadinejad’s progressive program in giving benefits to the poor, and his outspoken language against the U.S., was not something that the establishment wanted in the office of the presidency at this time.

However, it is not just in Iran that elections serve to legitimize and solidify the system. In the United States, candidates run through an intense primary system. The two people who, through the primary process, garner the most support, get the nomination of the two main capitalist parties.

Candidates need to be millionaires or get corporate campaign contributions in the millions to have a chance. Working class representatives, ordinary people need not apply. One could argue which of the two main parties’ nominees are better qualified for the job – the CEO of the capitalist state. But there is no question as to the absolute loyalty of both to the political system. Elections in Iran, as in the U.S., are a means of choosing which faction of the ruling class will run the state apparatus.

Another area where corporate media misrepresentations portray a completely false image of Iran is the economy. They commonly depict the economy as being “in tatters,” “on the verge of collapse,” “spinning in a downward spiral,” etc. But this is far from the truth.

According to the World Bank, “Following a contraction of close to 2 percent in 2015, the economy bounced back sharply in 2016 at an estimated 6.4 percent.” The growth trend is projected to continue in 2017. The period of contraction was the direct product of sanctions that did not quite paralyze the economy, but did make years of growth impossible to maintain.

Like all capitalist economies, Iran’s economy has a myriad of problems from which the working class suffers. Still, the economy is far from collapsing. What is most frustrating for the U.S. ruling class is not that Iran’s economy is collapsing and the people are suffering. It is that Iran has held on through years of sanctions and other pressures; that the economy is significantly growing and Iran keeps increasing its influence in the region.

As long as Iran’s working class is not politically prepared to take state power, an independent, nationalist state is much more in its interests than a subservient client state. For the U.S. working class, independent states around the world materially benefit us because they weaken the capitalist class that is our exploiter and oppressor.