Iraq at the breaking point 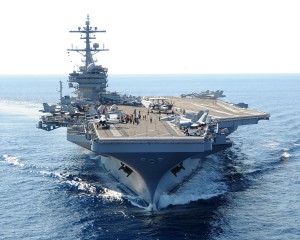 Why is the U.S. bombing Iraq again and sending in special forces? Given the history of U.S. sanctions, invasion and occupation no one should believe that it is out of some new-found concern for the plight of the Iraqi people, as President Obama claimed. In fact, it is U.S. intervention that has been the key factor in creating their plight.

Over the past quarter-century, four administrations have waged criminal war by military and economic means on a country that has never threatened the U.S. The consequences have been indescribably horrible. More than two million people – overwhelmingly civilians — have died due to economic deprivation and armed violence. More than five million more have been wounded and/or made refugees. This in a country whose population today is about 26 million. Iraq has been torn apart in ways that would have seemed unimaginable two decades ago.

Organically incapable of doing anything positive to rectify the unraveling that it created, Washington has turned once again to military means in an attempt to overcome the new crisis.

While so far, the renewed U.S. role has seen limited bombing, stepped-up intelligence gathering, hundreds of new “advisers” and special forces troops, and increased aid to the Iraqi Kurdish military forces, the logic of intervention is toward greater escalation, especially if ISIS seeks to enlarge its already major territorial conquests.

Once engaged, avoiding defeat or the perception of defeat becomes the highest priority for the imperialists. Thus the very real possibility of much-expanded war.

Occupation opened door for Al-Qaeda and ISIS in Iraq

ISIS has an ultra-reactionary and sectarian program that targets for death and destruction everyone who does not follow its extreme fundamentalist version of Islam. In areas under its control, ISIS has tortured and murdered thousands of people, including Shia Muslims, Christians, Yazidis, Sufis and other Sunni Muslims who don’t agree with their religious views.

It has decreed that women in conquered areas have no rights and must stay home unless accompanied by a male relative, and then only if covered from head to toe.

What has enabled the lightning advances of such an organization that just four years ago was virtually defunct according to its own account?

ISIS grew out of the group, Al-Qaeda in Iraq (AQI), which fought the U.S. occupation but also carried out sectarian war against fellow Iraqis between 2003 and 2009, when they were largely defeated by other Sunni Muslim militias in the north and west of Iraq.

Al-Qaeda had had no presence in Iraq before the U.S. invaded and occupied the country in 2003, disbanding its government and military. The overthrown Ba’ath Party-led government was secular and did not tolerate such groups.

The “Sunni Awakening,” as the militias were known, turned on AQI in 2007, resenting and rejecting attempts by AQI to impose its extremist religious and cultural practices on the population. The U.S., which had been in danger of outright defeat in Iraq in 2006-7, put tens of thousands of Sunni Awakening fighters on its payroll at the time.

That it was the 2003 U.S. invasion and occupation that made it possible for Al-Qaeda to enter and grow in Iraq is an indisputable fact virtually never mentioned by the corporate media.

What allowed for the revival of AQI was the war against the secular government of Syria led by Bashar al-Assad which began in 2011. It is important to remember that on the day after the fall of Baghdad in 2003, a high U.S. official, John Bolton, warned that “Iran, Syria and North Korea should heed the lesson of Iraq.” Bolton’s terrorist threat made it clear that conquering Iraq was not enough, and that Syria, along with Iran and North Korea, were in Washington’s crosshairs.

The U.S. and its allies – Britain, France, Turkey, Saudi Arabia, Qatar, Jordan and others – have armed, trained and financed the highly splintered opposition fighting the Syrian government. Saudi Arabia and Qatar in particular armed the most extreme, right-wing organizations, including AQI.

After entering the Syria conflict, AQI changed its name to ISIS in order to take advantage of new opportunities in that country.

In 2012, the Al-Qaeda leadership headed by Ayman al-Zawahiri expelled ISIS, reportedly over issues including ISIS’s extreme and self–publicized brutality, and refusal to follow Zawahiri’s directions.

Thanks to the intervention by imperialist and other reactionary governments, the civil war in Syria extended and expanded, destroying much of the country. The prolongation of the fighting was a key factor allowing the growth of ISIS.

Heavily funded and armed, ISIS took over significant areas of eastern Syria bordering Iraq, including oil fields which provided a major new source of funds. Then, in June 2014, it launched a major offensive into Iraq, conquering much of northern and western part of the country, including Iraq’s second-largest city Mosul, and declared the “Islamic State” in that area and much of eastern Syria.

The extreme sectarian brutality by the security forces of the Nouri al-Maliki-led government in Baghdad, especially directed against Sunni Muslims, helped pave the way for the rapid advances of ISIS in predominantly Sunni areas. Many people in the north and west of Iraq viewed ISIL, despite its reactionary program, as the “lesser evil” as compared to the Iraqi army.

When the ISIS forces attacked Mosul, a large part of the U.S.-funded and trained Iraqi army abandoned the field – and their weapons – without firing a shot. A vast array of U.S. weaponry, including advanced tanks, artillery and more fell into ISIS hands, as did hundreds of millions of dollars looted from Iraqi banks, greatly enhancing ISIS’s battlefield capabilities.

ISIS’s leader, known as Abu-Bakr al-Baghdadi, declared the organization’s intention to conquer all of Iraq and other countries, create an Islamic caliphate (kingdom) with himself as emir (king), and to kill or force-convert anyone who didn’t follow the ISIS path.

Why the U.S. bombing campaign now

In his August 7 announcement, Obama sought to justify the resumption of bombing on humanitarian ground, particularly to rescue Iraqi Yazidis, Christians and others who fled the ISIS advance in terror. And there is no doubt a humanitarian crisis for hundreds of thousands of people in northern Iraq, and millions throughout the region.

This crisis has been ongoing over the past months, without the U.S. taking any action. All public relations proclamations aside, the Pentagon is not a relief organization and U.S. foreign policy has never been motivated by concern over human suffering.

What triggered the new U.S. intervention in Iraq was the crossing of one of the United States’ real “red lines,” when ISIS forces attacked and began defeating forces of the Kurdish autonomous region in northern Iraq, moving close to the Kurdish capital, Erbil. The Kurdish government is a client of Washington and the region holds about 30 percent of the country’s oil.

Other “red lines” for the U.S. include ISIS attempting to take over Baghdad, base of another U.S.-created government which rules over a country among the richest in the world in petroleum.

Neither the U.S. nor Israel would stand by if ISIS moved against Washington’s client state monarchy in Jordan.

There is a very real possibility that ISIS, which is rapidly growing and clearly has expansionist aims, will ignore these “red lines.” ISIS forces are reportedly strengthening their position both south and north of Baghdad. An ISIS attack on Baghdad could lead to rapid escalation of U.S. intervention and new and wider war.

While on the one hand attempting to limit ISIS’s advances, the Obama administration continues to take steps that benefit ISIS. On June 26, more than two weeks after ISIS seized Mosul, Obama announced that the U.S. would send $500 million to arm the “moderate” opposition in Syria.

In an August 10 article, Patrick Cockburn, Middle East correspondent for the London-based Independent newspaper, wrote: “An unnamed intelligence officer from a Middle East country neighbouring Syria told me that ISIS members ‘say that they are always pleased when sophisticated weapons are sent to anti-Assad groups of any kind because they can always get the arms off them by threats or cash payments.’”

Control of the Middle East has long been a key element in Washington’s overall global strategy. For the past 70 years, U.S. imperialist policies and actions have been dedicated to the destruction of all progressive movements and independent states in the Middle East, regardless of the human toll. The aim has been to subjugate and exploit this oil-rich and strategic region, and that remains the aim today.