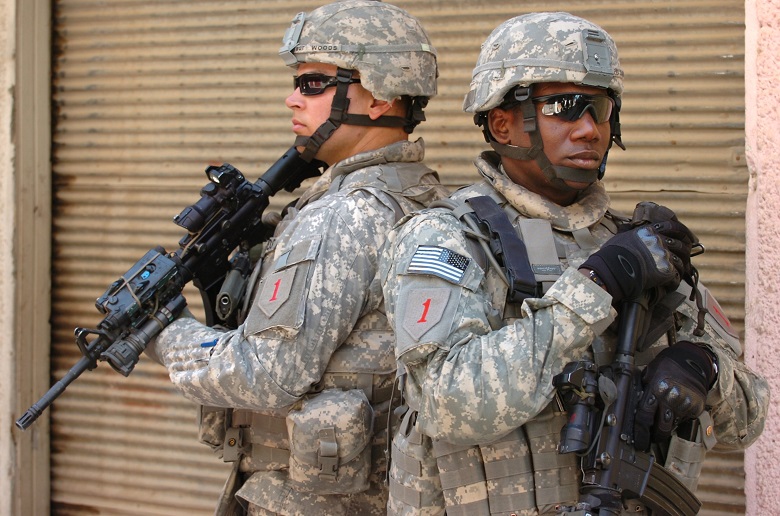 Soldiers in the 1st Infantry Division, soon to be back occupying Iraq less than three years after they left.

James Circello also contributed to this article. Prysner and Circello are former non-commissioned officers in the U.S. Army, who served together in the 173rd Airborne Brigade during the invasion of Iraq in March 2003.

As Iraq war veterans, it is almost surreal watching the rapid unfolding events that has brought us, again, into an occupation of Iraq, with no public discussion about the potential consequences for soldiers and our families.

The deployment of regular Army “boots on the ground” has begun—and looks poised to grow.

The Pentagon announced on Sept. 25 that the Headquarters element of the 1st Infantry Division is now staged in Kuwait, under orders for a one-year deployment to Baghdad, Irbil and possibly other cities in Iraq. This is just the first of many future rotations.

Army Chief of Staff Gen. Ray Odierno said of the deployment “The complexity of the environment that we have to operate in now, and probably the next 10 to 15 to 20 years, we need these headquarters.” With that, this general who built his career on the 2003 war, set the stage for people not even born yet to be sent to occupy Iraq.

The 1st Infantry Division, a tank unit, was also sent to Iraq as one of the advance elements prior to the U.S. ground invasion in March 2003. Their initial deployment was extended by six months to fight an armed uprising by the Iraqi people, completely unanticipated by the generals and politicians.

Around 500 regular Army soldiers (increased from 130 announced the day before, in true Washington fashion), will be leaving their families for 12 months to return to the site of the U.S. government’s most blood-drenched foreign policy disaster since the war on Vietnam.

Fort Riley, from which the 1st Infantry Division is deploying, lost 140 soldiers and had thousands wounded in “Operation: Iraqi Freedom.”

The complete carelessness and belligerence with which we are being thrown back into Iraq is beyond alarming.

Has there been any public discussion or debate by our so-called representatives about what this could mean for soldiers and our families? Has there been any scrutiny at all over the fact that U.S. soldiers could again be targeted and blown up in large numbers by a wide variety of Iraqi groups that oppose Islamic State but also refuse to be occupied by the United States?

The 500,000-strong Mahdi Army, under the command of prominent cleric Muqtada al-Sadr, has already vowed to take a break from their war against Islamic State to attack U.S. troops if they return. Other broad sectors of the population, which fought for years to drive out the U.S. military, could very well follow suit. But that potentially major combat scenario is completely absent from the speeches given by the Pentagon.

Even if the Generals give us the flimsy assurance that this Division Headquarters will just be a base supporting Iraqi and Kurdish troops doing all the front-line fighting, thousands of casualties were inflicted on U.S. soldiers holed-up on big fortified bases by suicide bombers, rocket and mortar attacks, “insider attacks” and car bombs.

But there is no discussion, or even feigned concern, about what could possibly happen to the young men and women who are being rushed back to the place where so many of us left in coffins and wheelchairs.

The Pentagon just announces that we’re going. We’re expected to trust them, as if we’ve all forgotten about what a catastrophe the last Iraq war was for soldiers, our families and Iraqis.

Brave words from the Generals—the safest soldiers in Iraq

1st Infantry Division commander Maj. Gen Paul Funk—who commands but does not participate in battle—said “we stand ready to deploy anywhere in the world to protect the United States of America.” Except, the Pentagon says quite openly that there is no intelligence indicating that Islamic State poses a threat to people in the United States.

He went on to say “we are ready for anything because we know we have the whole nation behind us.”

Why, then, did the President and his staff have to repeat on television over and over that “there will be no boots on the ground in Iraq”? That doesn’t sound like the words of a commander who thinks the whole nation would be behind such a decision.

The White House has skirted around the admission of “boots on the ground” because those boots are worn by U.S. Special Forces soldiers, Marine Corps security guards, drone operators and Apache pilots.

Those boots, which apparently don’t count, increased in number periodically since June, going from under 200 authorized and deployed to around 2,000.

Sending a Division Headquarters sets the stage to have other elements of the Division follow behind.

Should we believe that the generals are sending a command and control operations center without the intention of sending the Army units that it commands and controls?

If the past three months are any indicator, it would not be surprising if this new 500 soldier deployment, too, was incrementally increased.

What the U.S. government wants in Iraq

Their stated goal is to “degrade and destroy ISIL.” But whatever their stated goal is, there is no doubt that the U.S. government seeks to establish a permanent military presence in Iraq—just like it did at the end of the Iraq war, but was unable to secure in the midst of a political crisis.

The three-piece suits in Washington serve and protect the interests of big banks, oil giants and corporations. Key to their doctrine of being the world’s leading economy is the projection of military power wherever there are resources to be gobbled up. That is how the United States functioned from its birth, and the foundation on which it rests today. The Middle East is home to two-thirds of the world’s oil.

President Obama didn’t withdraw troops from Iraq because he believed it was best for U.S. service members, their families and the Iraqi people. He did so because he, like many in a certain sector of the political and military establishment, believed the U.S. occupation to be politically counter-productive to its geopolitical strategy.

But now that political situation has changed. The widely-hated and brutally sectarian Iraqi government is now begging for the U.S. military to come back, unlike its posturing three years ago.

The White House and its parade of military generals featured in the U.S. media have established a fear-based narrative that this will be nothing like the last war, but a limited humanitarian mission to simply destroy a vile terrorist group, leaving out all the many haunting details of what could really happen if Iraq is re-occupied.

The best way soldiers can really serve the people of the United States is by refusing to take part in this new rush to war by politicians and officers drunk with power and arrogance.