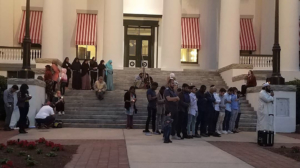 On March 19, the Islamic Center of Tallahassee and FSU Students for Justice in Palestine held a solidarity vigil for those who were lost in the attacks at Al Noor Mosque and the Linwood Islamic Center in New Zealand on March 15. The shooter was a white supremacist who left behind a 74-page manifesto detailing his racist rhetoric towards Muslims, who he viewed as “invaders.” This massacre is just one of the most recent manifestations of white supremacy, fascism and settler-colonial violence. It is necessary to uplift the lives that were lost as well as emphasizing the principal forces that drive tragedies like this.

There was a touching show of unity as over 40 community members, both Muslim and non-Muslim, came to the steps of the Florida Historic Capitol to observe the candlelight vigil. The event started out with a few words from Imam Munir Alfarra, who said, “If I could tell him something I would say he did not waste his time to know about Muslims. To know how they pray, and when and where. To know that Muslims’ doors are always open. When they worship they don’t close the doors. To let him know that Muslims are welcoming to everybody and that Islam is a religion of peace, based on justice. And whatever he did, he did it to make us more united. Evil has no place between us. We are more united. We love our religion more, we will pray more. We will respect our religion and each other more.” He then recited a passage from the beginning of the Quran.

Additional speakers included teachers from the Islamic Center of Tallahassee, Muslim students, as well as Reverend Joe Parramore from Quincy, who is a vocal gun reform activist and supporter of LGBTQ rights within the Christian community, in a show of interfaith solidarity. Dr. Rashidi from the ICT urged those who had congregated to visit the local mosque and talk with the teachers and adherents there, to learn more about the faith and the way it is practiced, and expressed that there would be less hatred if there was more understanding between peoples.

Morgan Flake, an ICT member, community activist and one of the event’s main organizers, spoke multiple times throughout the vigil about the Muslim community’s need to reclaim their power. They spoke specifically to the experience of hijabis who are “visibly Muslim” and therefore more vulnerable to Islamophobic hate speech and violence. “[White supremacists] see someone in hijab, and they just decide they are from another country,” they said. “I know a couple years ago when the current president was inaugurated, I saw so many sisters posting on Facebook about how they were too afraid to wear hijab anymore. No sister should ever be afraid to wear hijab … nobody should ever be afraid of being Muslim.”

Also speaking was Reem Zaitoon, FSU SJP President and PSL organizer, who emphasized the racist and insidious motives of the attacker.

“At the pinnacle of colonization, we have witnessed genocide, displacement, slavery, rape, the assault of our women and children, and imperialism, which is the highest form of capitalism. It is from this dawn of the systemic oppression of white supremacy that Black and Brown people continue to suffer and be executed … I hope we don’t lose sight of that. That this was an act of white supremacy and fascism and that the road from this is not only gun reform but to actually look into how these people are able to infiltrate our communities, how they are able to commit massacres like this, and how we can ultimately stop this from happening.”

The vigil ran late and as dusk began to fall, Imam Alfarra suggested having Maghrib at the steps of the Old Capital. Maghrib is the fourth of the five obligatory daily prayers (salat) in Islamic tradition. ICT member Ramy Noseir led the call to prayer by performing Maghrib Adhan, and the Muslim community prayed and healed together.

Revolutionary socialists support the right to self-determination of all oppressed nations and people. It is vital to reiterate this sentiment as we face more and more Islamophobia and anti-Palestinian rhetoric. The Palestinian diaspora is a product of the same forces that have driven this hate crime: white supremacy, ethnonationalism, Islamophobia and fascism. Furthermore, we must recognize the current attacks on Gaza for what they are: imperialist attempts to ethnically cleanse Palestine. Israel is as much of an enforcer of settler-colonialism as both New Zealand and the United States. Bipartisan support for Zionism and recent attacks on Muslim women such as Ilhan Omar and NYU student Leen Dweik reveal both conservatives’ and liberals’ complicity in spreading the Islamophobic and racist rhetoric that inspired the Christchurch attack.

As Zaitoon said, “From Palestine, to the U.S., to New Zealand, power to all colonized peoples and death to the white supremacist system!”