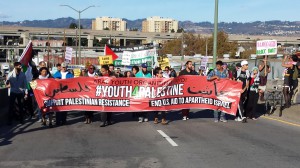 A significant step forward in the struggle against Israeli apartheid was taken this weekend in the San Francisco Bay Area. For the third time in less than three months, an Israeli cargo ship owned by the ZIM shipping company was prevented from unloading its cargo as scheduled.

The ZIM Beijing ship was scheduled to dock at the Port of Oakland on Oct. 25 but never showed up. The Beijing passed through the Panama Canal, turned north on course for the Port of Oakland and then after a few days traveling towards Oakland veered west on its way to destinations elsewhere.

Prepared to meet the ship at the Port of Oakland was a “welcoming” party of Palestine solidarity activists organized by the Block the Boat coalition. The Block the Boat coalition, comprised of Palestinian, Arab and pro-Palestinian activists and organizations, was formed earlier this year to highlight the role the Port of Oakland plays as an entry point for goods being shipped by the Zionist ZIM corporation. Amongst the array of goods carried by ZIM ships are materiel for local police forces in the United States.

Once it became clear over the weekend that the ship was not arriving on or near the schedule, the coalition organized a rally and march on Oct. 26 to the port to let ZIM know what they can expect if they try to come back.

The success of the Oct. 25 mobilization comes two months after the BTB coalition organized a historic action against the ZIM Piraeus. The ship tried to dock on Aug. 16, but was prevented from unloading for four days and ultimately little if any cargo was handled.

The BTB coalition issued a press release on October 29, which read in part, “Pro-Palestinian activists in the Bay Area achieved a decisive victory over the Israeli-owned ZIM Integrated Shipping Services this past weekend. As part of a sustained organizing effort to protest Israel’s ongoing occupation and apartheid against the Palestinian people, organizers deterred the container ship ZIM Beijing from docking at the Port of Oakland.

“Members of ILWU Local 10, the union which represents dock workers at the Port of Oakland, informed BTB organizers that the ZIM Beijing has been rerouted to Russia ‘to avoid disruptions at the SSA Terminal,’ according to a statement by BTB. The ZIM Beijing was originally scheduled to arrive and unload its cargo at the Port of Oakland on October 25, but changed course to avoid protests that had been planned by BTB.”

In an unprecedented development, ZIM has no ships scheduled to dock at the Port of Oakland.

Oakland activists see this retreat as a victory for Palestine, and are hopeful that they have staved off ZIM for good. “This effort of Block the Boat, the Palestinian and Arab communities, and allies has truly revealed our collective power against Zionism,” says Sameh Ayesh of Arab Youth Organizing. “ZIM is the largest shipping company in Israel, and the 10th largest in the world; it is now clear to ZIM that our communities in the Bay Area will not welcome it or any other business that supports Israeli occupation and apartheid.”

The solidarity of the port workers, who have historically stood against injustice, including refusing to unload cargo carried by ships flying the racist South African apartheid flag, has been an important component of this effort. The resistance in Palestine is intensifying, and so too must our solidarity all around the world.

Originally published by the ANSWER Coalition