Protesters gathered in New York City outside the Philippine Consulate on March 8, International Workingwomen’s Day,  to express their outrage at the genocidal and misogynistic violence of Philippine President Rodrigo Duterte’s Martial Law. 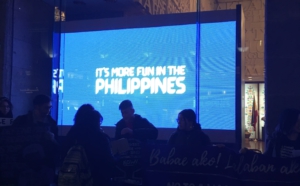 Demonstrators exposed the official fantasy of the Philippines by holding their signs and banners denouncing the violence that women and workers experience there in front of the consulate’s tourism ads playing on jumbo screens and showing happy white Westerners being guided through the immaculate lands.

Bayan USA, Gabriela NY, and other Filipino groups gathered with allies as part of the worldwide IWD actions honoring the victories and sacrifices of the world’s working women. They were not intimidated by a police encirclement. On the contrary, working women spoke with fire and passion at the three-hour action against the machismo of President Duterte, who has called for women liberation fighters to be shot “in the vagina,” among other violent threats.

Duterte’s regime is not a self-sufficient one. His violent Martial Law is propped up via aid from Trump, and a Mutual Defense Treaty. The effects of U.S. imperialism reach far beyond the Philippine Islands, however. A major issue facing Filipinas is their trafficking as migrant workers.

Either through necessity or force, women from the Philippines often find themselves working abroad, sometimes in slave-like conditions in the homes of the one percent and those friendly to them, doing child care, cleaning or other domestic tasks as the only way  to support their families.

Bernadette Patino, from the new organization Malaya (“free” in Tagalog), encouraged attendees to rethink our relationship to domestic work: “Reject the idea that we only have value if it makes profit. Work means domestic work, child care, sex work, and emotional labor. And we’re only free when we recognize the inherent value of all women workers.”

Trans activists Kristie from Gabriela and Dominic De Los Reyes from SIGE (a new Filipino LGBTQ organization) represented our trans sisters and siblings in the struggle. They targeted the violence of anti-trans laws and policies in the U.S. and the Philippine’s recognizing it for what it is, a women’s issue.

It wasn’t just anti-woman violence in the Philippine that was called out. Chants of  “From Palestine to the Philippines, end the U.S. war machine” opened the second part of the evening as activists addressed the violence of capitalism and imperialism against women, whether it be in Palestine, Africa, Honduras, Puerto Rico or Venezuela.

Brooklyn-based activist Aya Salem with the Party for Socialism and Liberation spoke in solidarity with the women of the Philippines, connecting it to the struggle in Venezuela. “Right now I’m thinking of our sisters in Venezuela and all the gains of the Bolivarian Revolution that are endangered by a U.S.-backed coup and counterrevolution. … War is always a women’s issue, as the first victims of imperialist violence are always women and other people oppressed by patriarchy.” She called on those present to attend the National March on Washington to say Hands Off Venezuela on March 16.