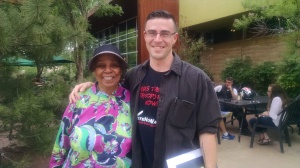 “In Albuquerque, NM, we have 800,000 people, 90 percent live in abominable conditions, they make less than $10 an hour, they live in trailer camps not fit for animals, not even for cats and dogs, like the one over there on Louisiana and Central right beside May’s Cafe,” explained Jewel Hall, long-time civil rights activist and former teacher.

Jewel has a lifetime of organizing experience that she has shared with organizers of the ANSWER Coalition.

“We need to do this to improve the conditions that people live in, but we have to put it all in layman’s language,” explained Jewel about the organizing approach needed to inspire people. “We need some strong people.”

‘If we propose something together, we can turn this town upside down’ 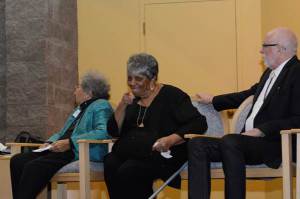 “I had a vision of what you are all saying, talking about the Native Americans, the African Americans, immigrants, Latino community, Palestinian community, the Islamic community. So, here the African Americans have a unique thing called Emancipation, the Native Americans have one, the Palestinians. You use that event to talk about how we move onward and all respect each other. We are all on this earth together. And we need to work together to do this,” teaches Jewel about how unity is key in any struggle. 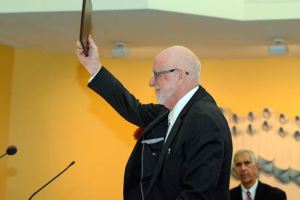 ‘Preston received it because of how his organization and the members of the organization came into the community and especially with the police with excessive force and with the killing … and had the system to answer for it,’ acknowledged Jewel of her organization’s award choice for outstanding leadership and lifelong commitment in the struggle..

“You bring together people who are sincere in the community, who want to attack all those issues together that we are talking about: lack of education, children with no food, low graduation rate, high prison rate, whatever it is that we want to change as a group.” “I’ve always said since I have been in this town: We need a community council,” explained Jewel about the approach of bringing together key leaders from impacted communities, united around a people’s program.

“[O]ur rationale for the community council has to be a powerful statement, just like when the preacher gets up there.”

“In my experience and I’ll be very candid. I came here in ’77 and they were killing kids (the police). If you go back to when I came here, they probably killed about 80 kids and nobody said a word.”

“There’s only one thing I need to say and I may not have all the vocabulary, so I’ll just simplify it. You have a lot of these people who are in place who were put in that place by the system. They passed the interview; they drank the lemonade,” explained Jewel on how to identify and build a nucleus of real allies and not be misled down the wrong path by opportunists.

“The 2 percent knows how to control the 98 percent. 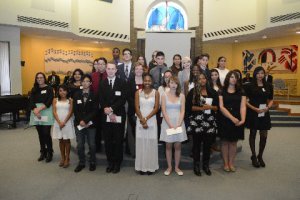 Jewel’s work includes 27 young people in 2015 who received educational scholarships for essays on the teachings and life of Dr. Martin Luther King, Jr.

“A long time ago back when we first started working on this police brutality (in Albuquerque), we went to meet with the mayor. We were simple enough to think he would join us and invite DOJ here (to investigate) because that’s what the mayor did in New Orleans when they had Katrina.”

Mass protests in 2014 eventually accomplished what a meeting could not. The federal government and the city of Albuquerque have entered into an agreement to reform the police. However, the framework of the agreement excluded community involvement or oversight, and completely ignored racial and economic disparities and barriers. For this reason, Jewell maintains that, once the reform process rewrites the book on city policing, the police will go on killing people like they did before, but this time by a different book.

Jewell went on to tell stories of individuals who are propped up by the system and who are therefore limited to address only those issues that the system allows them to. Jewel advocates for independent organizing of the people.

“It was founded to promote Dr. King’s legacy of love, courage, support of education, support of those who make a difference in the community and give back.” Jewel founded the council in 1990 to provide scholarships for youth and recognize exemplary leaders. (Visit this website to learn more about the council.)

“Preston received it because of how his organization and the members of the organization came into the community and especially with the police with excessive force and with the killing … and had the system to answer for it,” acknowledges Jewel of her organization’s award choice for outstanding leadership and lifelong commitment in the struggle.

The new generation of organizers in the struggle to win justice through unity appreciate the advice and lessons from Jewel’s lifelong work and plan to use it to enrich their organizing efforts.