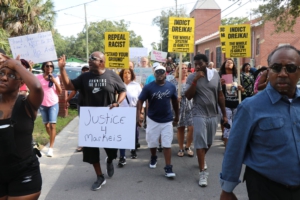 On Sunday, hundreds of people in Clearwater took to the streets to demand justice for Markeis “Keis” McGlockton and the arrest of Michael Drejka. After a vigil at Mt. Carmel Baptist Church, his family and the local community marched to Circle A convenience store, the site of McGlockton’s murder.

Three days earlier, Drejka, a 47-year-old white man, gunned down and killed McGlockton, a 28-year-old Black man, in front of McGlockton’s three children and girlfriend outside Circle A convenience store. A surveillance camera caught the entire encounter on video.

On July 19, Drejka pulled up to the store and began harassing Britany Jacobs, McGlockton’s girlfriend, about her being parked in an accessible parking space. McGlockton was in the store with his 5-year-old son when he heard what was happening.

Defending his girlfriend of nine years, McGlockton went outside and shoved Drejka, who fell to the ground. Four seconds later, as McGlockton walked away, Drejka fired a shot into the left side of McGlockton’s abdomen.

“He deliberately set out to start something. I feel like he targeted our race, a Black person, to start that so he could shoot him,” said Kristy, who lives nearby and stops by the store every day before and after work. “He pushed him down because [Drejka] was threatening his family. And anybody would have did that…And he backed off. So his life wasn’t in no danger. So I don’t know why the sheriff would say it’s ‘Stand Your Ground’, but it’s not ‘Stand Your Ground.’”

McGlockton walked back into the store and collapsed, dying in front of his 5-year-old son. McGlockton’s other children, 3 years old and 4 months old, were in the car, only feet away from their father when he was shot.

Pinellas Sheriff Bob Gualtieri has refused to arrest Drejka, claiming that he is protected by “Stand Your Ground.” A law designed by NRA and ALEC and first passed in Florida in 2005, “Stand Your Ground” takes away a person’s “duty to retreat” before using deadly force, if they reasonably believe that it is necessary to prevent death or great bodily harm.

Sheriff Gualtieri is also an attorney and former general counsel for the Pinellas County Sheriff’s Office. Therefore, after seeing the video, he knew the law and knew that Drejka did not reasonably believe that shooting McGlockton was necessary. In light of these facts, Gualtieri’s refusal to arrest Drejka is nothing less than a blatant approval of racial terrorism. “Markeis wouldn’t be dead if Markeis didn’t slam this guy to the ground,” Gualtieri told reporters. 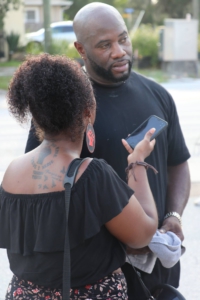 “Markeis was a fun-loving guy. He loved his family, would do anything for his family. Full of energy. I mean, he was just an all around good kid. I never had any problems with him growing up. He was very respectful, always respected his elders. He was more of a family man than anything. He loved his kids,” McGlockton’s father, Michael McGlockton, told Liberation News.

“This guy [Drejka] never went to jail, never went through the booking process, never got fingerprinted, never even got his mugshot taken. Nothin’. So basically, you’re telling me you can just shoot somebody and if it falls up underneath ‘Stand Your Ground’ law, they’re going to let you get up out the back of the patrol car and walk home? It’s not right,” he said.

“He was not ‘standing his ground.’ He wanted to shoot somebody. He shot him in cold-blooded murder and he should be arrested,” said Ethel, a community member who is close to the family and arrived early at Circle A to protest on Sunday. “He shot that man in front of his family, and we need justice. This another Trayvon Martin case. You got this man finna be put in his grave, while this other man is walking around. He should be locked up.”

Only weeks before, Drejka pulled up to the same Circle A store and confronted a Black man for parking in the accessible parking spot. The man asked if Drejka was differently abled and Drejka replied, “No, my mom is.” When the man offered to move his vehicle and asked if Drejka’s mother was present, Drejka began using racial slurs and threatening to shoot the man. 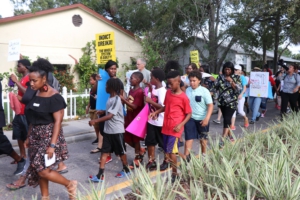 The community and McGlockton’s family marched down Pennsylvania Ave, N Martin Luther King Jr Ave, Fairmont Street and Douglas Ave as dozens of families and neighbors watched from their homes. Marchers carried signs reading, “We want justice for all, forget about ‘Stand Your Ground’” and “Armed vigilantism: SYG does not deter crime. Homicides increase! Welcome to Florida.” In the intense summer heat and light rain, they chanted, “If we don’t get no justice, you don’t get no peace” and “Hey hey, ho ho, Sheriff Bob has got to go!” 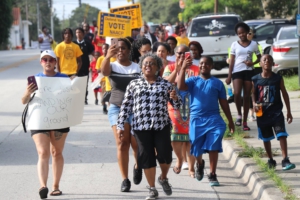 An equally large crowd, who had been protesting at Circle A, greeted marchers as they got near the store. As the two crowds came together, there was an atmosphere of resistance and hope in the street. They gathered in the parking lot, where leaders from Dream Defenders, Black Lives Matter: Tampa, Party for Socialism and Liberation, NAACP, local activists and clergy spoke to people circled around them. 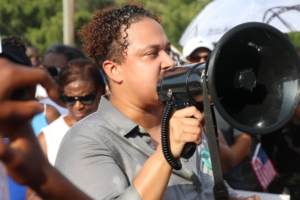 Ashley Green of Dream Defenders spoke to the crowd about the years-long struggle to repeal “Stand Your Ground”: “It is important that we not have a short memory. We as a community and as a people do not have the luxury of a short memory. Because the truth of the matter is that Markeis is far from our first fallen due to ‘Stand Your Ground.’ Have we not forgotten the life of Trayvon Martin so quickly, whose killer George Zimmerman remains on the streets of Florida today due to ‘Stand Your Ground?’ Have we not forgotten Marissa Alexander so quickly, who sat in a jail cell for more than half a decade for firing a warning shot into the roof of her house to protect her children from an abusive partner? When she claimed ‘Stand Your Ground’, the court said, ‘No, you have no ground to stand.’”

Green also spoke about Dream Defenders’ occupation of Florida’s Capitol Building in Tallahassee in 2013 to protest “Stand Your Ground”; the need to fight Florida’s law banning felons from voting, a product of the Reconstruction Period after slavery; voting for policies that end racism; and the fact that there can be no justice without freedom, including an end to police violence, hunger and barriers to education. 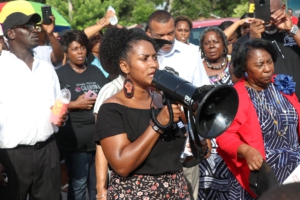 Ruth Beltran of Black Lives Matter: Tampa and Party for Socialism and Liberation urged the community to commit to revolutionary change: “We know that the oppression of people of color is not just because someone is in office. We know that the oppression of Black, brown and Indigenous people in this country is systemic. It doesn’t matter who’s in office today or tomorrow, the oppression continues, because we live in a society that’s built based on white supremacy and capitalism, where we value profit over people. So we need to wake up and understand the system that’s around us. A lot of the things happening around us have to do with color, but they also have to do with capitalism, with a system that views and values profit over people. There are millionaires making money off everybody in county jail today. As a working class, we need to come together and unite.”

Britany Jacobs, the family and community continue to demand justice. Today, community activist Lorenzo Jenkins and others held a fish fry at Circle A to raise money for the family and the cause, wearing shirts that read, “Bye Bye Gualtieri. Let’s vote him out in 2020.” On Friday, they will also hold a protest at State Attorney Bernie McCabe’s office at 9:30 AM at the 49th Street courthouse. A celebration of McGlockton’s life will be held on Saturday at Shiloh Missionary Baptist in Largo.

As of Wednesday night, over 10,000 people have signed a petition, circulated by Restorative Justice Coalition and Color of Change, demanding that State Attorney McCabe immediately file charges against Drejka.