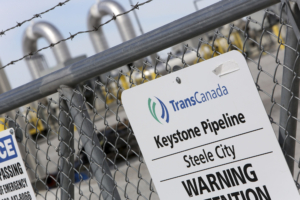 The night of Nov. 16 saw a “geyser of oil” erupt from TransCanada’s Keystone XL pipeline in South Dakota. As of this article’s writing, 210,000 gallons have leaked from the pipeline into the plains of North Dakota, risking water contamination, lingering ground pollution and long-term agricultural land loss.

The spill comes after several years of sustained movement against the Keystone XL Pipeline’s continued construction, which TransCanada plans extend in order to complete a pipeline network spanning from the Canadian border to the Gulf of Mexico. That movement has raised time and again the inevitability of oil spills—large and small—from the pipeline, which already spans over important farmland, aquifers and groundwater sources despite being only partially completed.

Partial completion of the pipeline is a hard-won reality and a victory for the environmentalist, farmers’ and Native People’s movement which has opposed the pipeline from the very beginning. Despite the broad opposition to the pipeline, TransCanada has bypassed environmental and zoning regulations through lobbying, legal maneuvering and mobilization of its massive resources in a state-by-state strategy aimed at demoralizing the people’s movement and gaining momentum against state regulators.

In other words, the spill comes at a time when the final set of permits are scheduled to be delivered or withheld from TransCanada by the Nebraska Public Service Commission—permits which will decisively determine whether or not the Keystone pipeline will be completed as planned.

It is an outrage that the pipeline—even in its current form—exists in the first place, let alone that its construction continues. The movement against it, which included nearly every section of society wherever the pipeline was slated for construction, fought through countless obstacles, intentionally-placed hurdles and stubborn delaying actions by petrochemical industry lobbyists and their defenders in government. That fight saw a major victory when President Obama was forced to pull TransCanada’s permits for further construction, but in February, TransCanada recognized the Trump government’s inauguration as a potential breakthrough when it filed an appeal of the Obama Administration’s decision.

Meanwhile, climate scientists have issued their second major warning for catastrophic climate change. In light of the dire urgency of the climate situation, fossil fuel infrastructure should have ceased expansion decades ago, and yet the petrochemical industry is determined to not just continue expanding, but to bypass legal restrictions on environmental impact and public safety regulations in the name of ever-rising profits.

This leak shows that capitalism is clearly unable to protect our planet and as a result is endangering all life on Earth. TransCanada has routinely ignored construction and maintenance regulations, despite promises to keep the pipeline from leaking. In this year alone, TransCanada has been forced to pay $135,400 in fines for safety violations, including corrosion control and is facing 13 separate pending cases against it for various violations of protective regulations. Those regulations have failed in general. The capitalists’ courts and legislatures approved the deal allegedly on the premise that TransCanada honors its commitments to environmental protections and to safety, though this enormous leak reveals the plain foolishness of those decisions and their apologists.

Capitalism does not distinguish the “legitimacy” of one source of profit versus another and the Trump administration has demonstrated to TransCanada and other fossil fuel corporations that it has no plans to ever stand in the way of their profits.

The movement against the pipeline was the only source for protecting against the pipeline before, and continued movement will continue to serve as the only safeguard against the Keystone Pipeline in the future. Ultimately, the broad people’s movement will need to be the motive force to overthrow capitalism, which has delivered this climate crisis and institute socialism, a system which can rationally plan the economy in the interests of people and the planet that sustains us all.