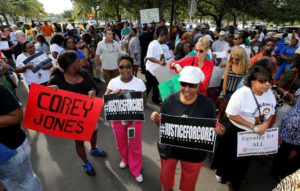 On June 1, a Palm Beach, Fl. grand jury did what a cowardly State Attorney refused to do and determined that Palm Beach Gardens police officer Noumann Raja’s slaying of Corey Jones was unjustified. Raja has been charged with manslaughter by culpable negligence and attempted first degree murder.

Corey Jones, a 31-year-old Black man from Lake Worth, Fl. was stranded late at night with a broken vehicle on I-95 when Raja stepped out of an unmarked van and confronted Jones in plainclothes. Jones had a firearm, which was being lawfully carried with a concealed weapons permit and was not fired during the incident. Without ever identifying himself as a police officer, Raja used his personal firearm to shoot at Jones six times. Jones’ family was notified of the death 38 hours later.

Since the Oct. 18, 2015 killing, Jones’ family and supporters has held regular rallies, marches and speak-outs urging the office of Dave Aronberg, Palm Beach State Attorney,  to file charges against Raja. On April 27, Aronberg announced that after six months of investigation by state and federal authorities and over 200 witness interviews, the state would not be filing charges against Raja, but punting the case to a grand jury. Police arrested protesters and journalists who were marching to Aronberg’s home a few weeks later.On June 1, a Palm Beach, Fla. grand jury did what a cowardly State Attorney refused to do and determined that Palm Beach Gardens police officer Noumann Raja’s slaying of Corey Jones was unjustified. Raja has been charged with manslaughter by culpable negligence and attempted first degree murder.

Following the non-indictments by the grand juries in the Mike Brown and Eric Garner killings, the use of grand juries in police brutality cases has received harsh criticism because they are held in secrecy without a judge and banned from the public. Perhaps one could argue that the grand jury in the Corey Jones case is reason to have restored confidence in the grand jury process and the U.S. judicial system at-large, but that logic misses a critical point: Why did the State reject filing charges on their own?

The evidence that has been at the State Attorney’s disposal was disclosed on June 1 through the release of the probable cause affidavit. The affidavit cites evidence that Raja committed a crime and knew that he had.

The affidavit reveals that Raja was on an auto burglary surveillance detail when he noticed Jones stranded on the side of a highway late at night. Jones, a drummer and Housing Authority worker, was on his way home after a band gig. Raja drove his unmarked van the wrong way up a ramp and parked perpendicularly in front of Jones’ car. Raja left his police vest, radio and department-issued firearm inside the van when he confronted Jones. Raja was wearing jeans, a tan shirt, sneakers and a baseball cap. Unbeknownst to Raja, Jones was on the phone with roadside assistance and the call recorded audio of the entire encounter:

Raja then tried to stage a crime. He called 911 using his personal cell phone over 30 seconds after firing his last shot. During the call, Raja yells, “Drop the f—— gun right now!” Raja then falsely claimed on the call that he identified himself as a police officer and gave Jones orders. Raja later admitted to investigators that he kept shooting despite seeing Jones throw his firearm out of reach. Raja shot at Jones as he ran away, which was corroborated by the medical examiner.

This case is a testament to the lengths prosecutors will go through to protect police officers and evade their duty to prosecute them, all the while aggressively throwing poor people of color into the cages of mass incarceration. In the face of the evidence, it is incredible that the State Attorney’s Office would take six months to ultimately relinquish control of this case and leave the charging decision to chance. Would it have done the same if Jones shot Raja under the same circumstances? Would Jones be held without a bond or be on house arrest like Raja two days after his arrest? Is it any wonder that people are filling the streets demanding that Black Lives Matter?