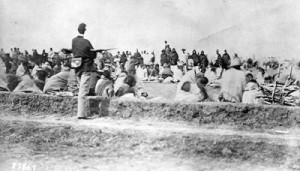 A U.S soldier guards Navajos during The Long Walk of 1864. (Courtesy of newmexicohistory.org)

In a long overdue action by the Taos New Mexico Town Council, councilors voted this week. to change the name of Kit Carson Memorial Park to Red Willow Park.

Carson was a notorious U.S. agent of racist genocide against Navajo and other native people in New Mexico. His role in the The Long Walk, where Navajos were removed from their homeland, Carson coordinated a “scorched earth” campaign where food supplies were cut of the the U.S. military. For example, Navajo writer Adam Teller, on his website about The Long Walk, recounts how Carson ordered the total obliteration of Navajo peach orchards which meant killing thousands of trees, which amounted to a death blow against Navajo people.

It is estimated that 8000 to 9000 Navajos were forced to march over 300 miles in the winter to Bosque Redondo, now part of Taos Township, where at least 3000 starved, and died from lack of clean water and shelter. 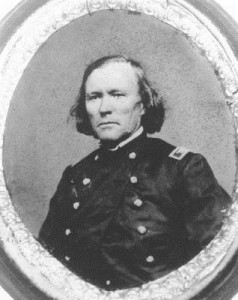 Although way too long in coming, it is nevertheless an important change in name, and can be seen as an extension the rising movement to eliminate racist names of mascots and other symbols of the great crime against humanity engineered by the organizers of the colonial westward expansion that devastated countless indigenous nations throughout the West.

Not to be lost in the discussion, it should be remembered that the genocidal policies of the U.S. were directed by murdering generals, such as Brigadier General James Carleton, to whom Carson reported. General Carleton, it is also important to recall, reported to President Lincoln who directed the genocidal Manifest Destiny policy on behalf of the expanding U.S. empire.