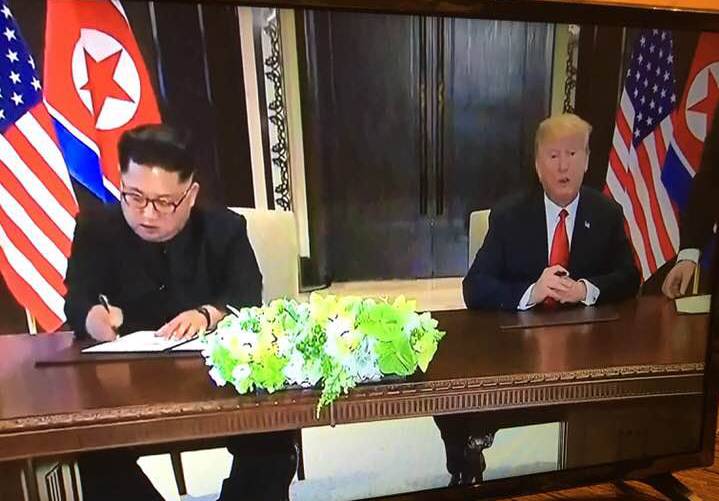 C. Kim is a Korean American anti-war activist and organizer with the ANSWER Coalition (Act Now to Stop War and End Racism). They posted the following status on their personal Facebook page.

This is long, but I need to get it off my chest because I am seeing way too many well-meaning folks allowing their opposition to Trump to turn into inadvertent opposition to the reunification of the Korean Peninsula.

Know your history. Korea was colonized by Japan for 35 years. This was a brutally violent occupation. Ex: Koreans were flogged for speaking Korean. Over 100,000 Korean women were abducted and made to be sex slaves for the Japanese Imperial Army.

Then, at the end of WWII, two young U.S. naval officers hastily and arbitrarily divided Korea using a small National Geographic map, thereby forcibly separating millions of families. My family is no exception. My grandmother was in the south but her sisters were north of the 38th parallel at the time. They never saw each other again. My grandmother is now in her 90s. One foreign occupation was replaced by another. You think the U.S. military cared about Koreans? Ha! MacArthur left the Japanese colonial forces in place until U.S. colonial forces could replace them. Read Proclamation No. 1.

For over 60 years, the Korean border has been one of most heavily militarized borders in history with anywhere between 30,000 to 70,000 U.S. troops in South Korea. This is not benevolent protection. This is classic imperialism. Read about the naval base on Jeju Island. Read about THAAD. Read about KorUS FTA.

Meanwhile, North and South Korea share the same unofficial nation anthem (아리랑). “Our Wish is Reunification” is a folk song all Koreans know. Joint sports teams are created to tell the world that Koreans desire self-determination.

Am I overjoyed by the prospect of One Korea? Yes, of course! Do I credit Trump? Hell no! Trump doesn’t care about Koreans. He called white supremacists “good people.” His impetus for the Korea Summit is about furthering U.S. capitalist interests in Asia. I credit the activists who have been relentlessly fighting for reunification and an end to the Korean War for decades.

The idea that one cannot support reunification without supporting Trump highlights the shortcomings of liberalism. It boils down to taking the position that (unwarranted) loyalty to the Democratic Party is more important than the basic human right of self-determination.