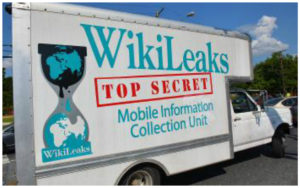 This revelation supports the charges made by Sanders and his supporters during the primaries that the DNC and its chair, Debbie Wasserman Schultz, were actively working against the progressive Senator’s campaign.

In one email, DNC chief financial officer Brad Marshall suggests that they use the issue of religion:

It might may no difference, but for KY and WVA can we get someone to ask his belief. Does he believe in a God. He had skated on saying he has a Jewish heritage. I think I read he is an atheist. This could make several points difference with my peeps. My Southern Baptist peeps would draw a big difference between a Jew and an atheist.

When questioned, Marshall claimed that he was not talking about Sanders. That is hard to believe. What other possibly atheist person of Jewish descent is prominently involved in the current election cycle?

Marshall has since posted an “apology” on his Facebook page:

I deeply regret that my insensitive, emotional emails would cause embarrassment to the DNC, the Chairwoman, and all of the staffers who worked hard to make the primary a fair and open process. The comments expressed do not reflect my beliefs nor do they reflect the beliefs of the DNC and its employees. I apologize to those I offended.

What about apologizing for attempting to use religious prejudice to influence the political process? “I apologize to those I offended” is one of the weakest forms of apology, only one step up from “I’m sorry I got caught.”

RI Governor “one of ours”

Bernie leads Hillary by 4 in the latest poll: http://www.publicpolicypolling.com/main/2016/04/clinton-sanders-close-in-ctpari-trump-headed-for-big-wins.html

If she outperforms this polling, the Bernie camp will go nuts and allege misconduct. They’ll probably complain regardless, actually. We might want to get out in front of this one with an inquiry to the RI Gov, even though she’s one of ours.

Can you say “voter suppression?” And they put it right out there in email. Didn’t anyone ever tell these people not to say anything in an email that you wouldn’t put on a billboard?

“Wondering if there’s a good Bernie narrative for a story, which is that Bernie never ever had his act together, that his campaign was a mess.”

Paustenpach concluded by implying that this narrative (of Sanders’ campaign incompetence) would show that “It’s not a DNC conspiracy, it’s because they never had their act together.”

Of course, these emails and many others show that the DNC was indeed conspiring against Sanders. The game is rigged, and millions of people are seeing the truth about this system, some for the very first time. The Democratic Party is anything but “democratic,” as evidenced by its use of superdelegates, not to mention repeated instances of voter suppression.

Sanders’ delegates and supporters are beginning to arrive in Philadelphia. Today, many were shut out of the Rules Committee, where Sanders supporters introduced a resolution to abolish super delegates, which was voted down. It appears that the Sanders delegates are planning to introduce a minority report to the full convention and demand a floor vote.

Lacking a crystal ball, I don’t know how the convention is going to unfold, both inside and outside the convention hall. It is likely that events will continue to unfold that will further expose the electoral system for the sham that it is: a system rigged to support the interests of the capitalist class.

As for me, I will never vote for Hillary Clinton. I will cast my vote for Gloria La Riva, the candidate of the Party for Socialism and Liberation.