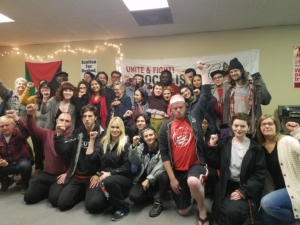 These are all very important questions.

Today in Russia, just like the United States and all around the world, the idea of socialism is again becoming popular as a result of the collapse of the Soviet Union and the in-your-face predatory nature of unchallenged global capitalism that has gripped the globe after the collapse of the USSR.

At the time of the overthrow of the USSR, there was a small but significant social movement, primarily composed of those seeking to restore capitalism and private property and promote the enrichment of the few, that existed in the Soviet Union. They protested and plotted for the overthrow of the Soviet Union. But this movement was in no way capable, in and of itself, of overthrowing such a powerful society that despite its contradictions guaranteed basic social, economic and political rights that were light years in advance of any of the capitalist countries at the time or now even. In other words, there was no real social basis for the counter-revolution as a decisive factor.

The Soviet Union, out of necessity, had a very capable state. This apparatus had great potential repressive powers. All countries have the need of a repressive apparatus, this includes socialist countries, because class conflict dominates the political realities of the human race.

Because there was no poverty or homelessness in the Soviet Union, the state apparatus was primarily used for the defence of the country from U.S. and European imperialism and for the containment of imperialist backed and pro-capitalist forces within the country. The Soviet Union did not use its state apparatus to harass and kill poor people and the oppressed like we see here in the U.S. While Black people were being lynched on the streets of the United States, the liberation struggle of the Black Nation in the United States was being promoted and nurtured in the Soviet Union. In fact, the Communist Party of the United States, which was part of the Moscow centered international of communist parties was the political party of a large section of Black people in the U.S. in the 20s, 30s and 40s. If the leadership of the Soviet Union had wanted to defeat the protest movement against socialism in the 1980s they would have had no problem doing so just like the leadership of China had little problem in 1989 when they put down the middle class student movement–which was fully backed by U.S. imperialism–in Tiananmen Square.

No, the Soviet Union was overthrown from the top. The leadership of the Communist Party had been seized by a group of so-called reformers and pro-capitalists who were the vanguard of the counter-revolution.

So, it is our opinion that what enabled and led to the collapse of the Soviet Union was actually the leadership’s unwillingness to protect some of the fundamental socialist principles of centralized planning and collective ownership of the means of production in a time of crisis for the Soviet system. They refused to take measures that would have kept the Soviet Union intact.

The leadership of the Soviet Union reacted slowly to the massive reorganization of the capitalist world economy in the 1970s–a re-organization made possible by the personal and digital computing revolution in the imperialist countries. Though the soviet system remained in place with all of its important trade protections and economic guarantees for Soviet citizens, no country is delinked from or immune to changes in the world economy. The soviet economy was a planned economy, that required, well, a plan. The same goes with capitalist economies in a general sense. The U.S. economy is so massive that if the ruling class does not agree on some basic economic strategies it too will falter.

In response to the Soviet Union falling behind economically, the leadership decided on “democratization” methods of economic decentralization, privatization and concessions to imperialism that they dressed up as progress when in fact they were a retreat. These policies were known as “Perestroika” and “Glasnost”.

While it is true that a genuine proletarian democracy had not existed in the Soviet Union for decades, there is perhaps no greater mistake you can make when you are in a battle–which the Soviet Union was in the entire time of its existence because of the capitalist’s aggression–than to call a retreat an advance because during a retreat you must be vigilant and on the defense in order for the retreat to not be turned into a rout. The fact that a bureaucratic layer had controlled the Soviet Union for decades only exacerbated this problem. Only the masses of people can sustain the socialist organization and functioning of society and the masses of people were disconnected from the leadership of the Soviet Union and had no real way to mobilize in defense of their socialist project when the political crisis exploded.

Perhaps even more importantly, the leadership of the Soviet Union in the 1980s began a severe turn away from defending other socialist countries and promoting the interests of minority nationalities within the USSR. Because of this turn away from the things that helped unify the socialist project for so long, sectarian hostilities actually broke out between different ethnicities within the Soviet Union during the 1980s.

So, for us the most important realization to take away from the collapse of the Soviet Union is the importance of leadership. In fact, leadership is decisive. As long as we have to fight the capitalist world order, we need organization. In a battle, organizations require leadership. In the battle for socialism, leadership must arise that can navigate the many difficulties, hardships and complexities of class warfare on a global scale. Spontaneity and a diversity of tactics will not lead to the defeat of our rulers, the consolidation of the working class rule or the protection of the revolution. At all time, we must make the correct decisions.

Of course there are other very important things for us to learn from the collapse and history of the USSR, chief among them is the simple fact that the basic model of socialism, revolutionary socialism–that we must seize the means of production, make the means of production public property and defend the social property rights of society with a workers state remain the only concrete solution to the rule of capitalism. All we have to do is compare the world during the time of the Soviet Union and all of the advances that workers and oppressed people made all over the world and how the whole world became decolonized using economic and military aid from the global socialist camp, to the world we have now, of unbridled U.S. hegemony in which barbarous wars and neo-liberalism have put the workers and oppressed people on the brink of disaster.

And, of course, what lead to the overthrow of the Soviet Union did not happen overnight. Decades of U.S. and European aggression against the Soviet Union and the fact that no socialist revolutions have happened in the most developed capitalist countries are important underlying reasons for the defeat of the first wave of socialism.

Beginning in the 1930s, the leadership of the USSR began concentrating on survival. Over time, the communist party prioritized peace with the imperialists and put the needs of the Soviet Union first. This is a strategy that we defend and believe was understandable from the Soviet point of view, especially considering that they were engaged in a life and death struggle with the imperialist powers who wanted to defeat the USSR at all costs.

But “Socialism in one country” and “coexistence” with imperialism, which dominated the thinking of the leadership of the communist party from 1935 on–though understandable and maybe even necessary as a defensive strategy–are ultimately, impossible goals. Coexistence with U.S. imperialism, the greatest oppressor in the history of the world is not possible. Socialism in one country is not the goal. We are for a socialist planet in which the human race is united under a society where the capitalists right to own any wealth has been abolished once and for all and a world in which we build a sustainable world of cooperation, peace and equality based rational economic planning.

We must build a party of working class leaders who can help facilitate the transfer of power in a time of crisis for the capitalist order, seize the means of production and put society on a basis of rational planning. We must smash the capitalists and their institutions and replace them with a workers state that can defend and promote the rule of the vast majority and liberate the entire planet from the grip of the ruling strata of bankers and billionaires.

Together, let’s build a new wave of socialism that can shock the world and place the toilers of the world in the driver’s seat of history!