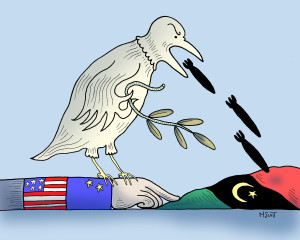 Conditions for the people of Libya have gone from bad to worse. Fighting on a large scale has been ongoing between rival militias, in particular in the capital Tripoli and in Benghazi. Due to insecurity and the lack of a functioning state, many ministries and government institutions, including the central bank, are dysfunctional, with workers having to stay home. The governor of the central bank has fled the country for Malta. Thousands of people have left Tripoli in search of safety. Libya is suffering a deep economic crisis and prices have gone up rapidly. Many warehouses have been looted. Consumer goods are difficult to come by as supermarket shelves are largely empty. The country is dealing with a 70% budget deficit, a historic high.

On Aug. 27, Libya’s UN Ambassador Ibrahim Dabbashi warned of the possibility of an impending civil war. He said that up to now he thought that a civil war was not possible, “but the situation has changed.” Foreign countries are directly interfering in the power struggle between rival militias. Arch reactionary United Arab Emirates and the military government of Egypt have carried out bombing attacks inside Libya. The U.N. secretary general’s special representative to Libya, Tarek Mitri, has expressed concerns over Libya’s further disintegration 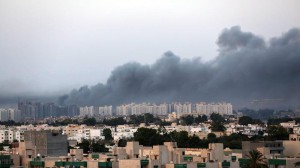 and warned that no military solution was possible.

Since the NATO overthrow of the nationalist government of Moammar Gaddafi in 2011, Libya has had a weak, and barely functional, government. In effect, rival militias have been running the country. The militias have been competing and fighting since the beginning, as indicated by periodic fights over the control of the airport. But in recent months, two distinct alliances have emerged. On one side there are the Islamist oriented groups, ranging from the Libyan chapter of the Muslim Brotherhood to Al Qaeda-aligned groups like Ansar al-Sharia. These forces are currently unified under the umbrella group Libya Dawn. The old General National Congress, dominated by Libya Dawn, has recently reconvened in Tripoli.

Neither side of the conflict has wide scale popular support, nor is either side progressive. These are forces that were catapulted into power by NATO after the 7-month-long bombing in 2011. Imperialist governments and their compliant media outlets propagate the usual racist narrative that the Libyan people are only accustomed to dictatorship; they have to learn the delicate art of democratic governance and need assistance in nation-building. NATO’s active destruction of the nation and the overthrow of the state in 2011 is rarely mentioned, or is portrayed as a positive contribution that just may not have been enough to bring about a functioning democracy. But the current state of chaos is the direct result of the destruction of Libya by Western imperialism.

Libya is a large but sparsely populated North African country of over 6 million people. It was once colonized by Italy but after the defeat of Italy in World War II, British and U.S. imperialism took control.

In 1969, a group of young nationalist officers overthrew the rule of the corrupt King Idriss in a coup. Under the leadership of Colonel Muammar Gaddafi, Libyan society underwent a revolutionary transformation.  The nationalist government shut down the U.S. Wheelus Air base and took an independent path of development. It implemented a wide scale program of literacy and education. It made healthcare and housing accessible to large parts of the population. Instead of profiting international oil giants, the country’s considerable oil wealth was used for the benefit of the people. Up until 2011, Libyans enjoyed Africa’s highest living standards. Gaddafi was a strong champion of forming a unity among African nations, a cause to which he devoted significant financial resources.

For these reasons, Libya was long on the Pentagon’s hit list. In 1986, President Reagan ordered the bombing of Tripoli in an attempt to assassinate Gaddafi. He survived, but his infant daughter and more than 300 others were killed.

Although the Libyan state appealed to the popular masses in its political program, over time and under relentless imperialist pressure, in the 2000s Libya’s government shifted to the right. Although the state still remained independent, it ushered in neoliberal reforms that limited social programs and subsidies for the poor.

The resulting dissatisfaction among parts of the population, long-running regional conflicts, and the rise of the Islamists particularly in the east of the country, gave rise to large demonstrations in early 2011. Although the demonstrations were attended by many unaffiliated individuals with legitimate grievances, the political leadership was with openly pro-imperialist elements, primarily pro-Western and neoliberal former elements of the state.

Ignoring the complex and multi-faceted character of the demonstrations, Western media immediately labeled the protests as pro-democracy, adopting the narrative of the people vs. the dictator. Unfortunately, liberal anti-war forces in the U.S. followed suit.

In their drive to overthrow the state, the armed rebels scored some early victories, gaining control of Benghazi and briefly expanding their reign. But with the state regaining its footing and managing to organize its base of support, the rebels suffered successive defeats to the point that they were on the verge of losing Benghazi, the last area remaining under its control. This was the main motivation for the United States to frantically push for the rapid passing of Resolution 1973 through the United Nations Security Council, passed on March 17, 2011. The resolution authorized the imposition of a “No Fly Zone,” under the pretense of protecting civilians from the state.

Once the resolution passed, the United States, France, Britain and other imperialist countries launched an intense bombing of the country. NATO did not simply enforce a “No Fly Zone.” It directly intervened in the civil war in support of the rebels. The armed militias worked as NATO’s ground forces, working under the effective command of U.S. and French special operations forces. NATO carried out over 10,000 bombings and sorties over the course of seven months. It targeted pro-Gaddafi forces and the country’s infrastructure to ensure the overthrow of the state. Eventually, the Libyan state collapsed, Gaddafi was murdered and the pro-imperialist rebels took over.

Since 2011, supporters of the former state have been severely repressed. The Libyan people are living under the tyranny of two groupings of rebels; rebels whose path to power was paved by NATO bombs. The overthrow of the state has elevated corrupt elements more than willing to give away the country’s resources to oil giants and multinational corporations. The overthrow of the state has also unleashed reactionary Islamist forces which are taking advantage of the defeat of the former nationalist state to try to implement their reactionary social policies.

The Libyan people face a great deal of hardship and a long path to forming a progressive political movement to eventually sweep aside the Islamist reactionaries and the client seculars. But, just as they overcame colonialism in 1969, so too will they reclaim their independence.